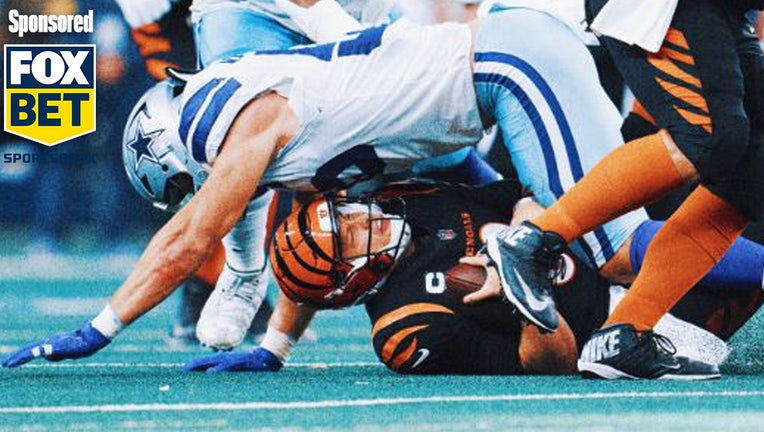 Here's all you need to know for the Bengals-Jets game, from the point spread, moneyline, over/under and expert pick from Jason McIntyre. (FOX Sports)

The AFC North squares off against the AFC East in Week 3 of the 2002 NFL season.

The Cincinnati Bengals visit the Empire State to play the New York Jets at 1 p.m. Sunday at MetLife Stadium.

The Bengals are winless after two games, including last week's loss to the Dak Prescott-less Dallas Cowboys. While Joe Burrow & Co. have looked good in spurts, the offensive line is porous and has allowed 13 sacks in two games. Everyone loves the swag of the new "Broadway Joe," but for the Bengals to have any chance this season, they need to protect their quarterback.

The Jets enter this game on a positive note, having dispatched the Cleveland Browns in Week 2 for their first win of the season. While Joe Flacco has been sporadic, rookies Garrett Wilson and Sauce Gardner have exceeded expectations early with their big plays. If the young guys keep playing in spirited fashion, these Jets may have something special in store for the near future.

Here's everything you need from a betting perspective for the Bengals-Jets game, from the point spread, moneyline, total over/under and expert pick (odds via FOX Bet):

This game is a rematch from last year when the Jets rode third-string QB Mike White to a stirring 34-31 win on Halloween. White passed for 405 yards and three TDs, including two in the final five minutes. From a gambling perspective, the Jets won outright as 11.5-point underdogs!

Cincinnati can't protect Joe Burrow (again), as he has absorbed 13 sacks in two games, and their tackles have gotten abused by T.J. Watt and Micah Parsons. As a result, the Bengals had zero explosive plays (20-plus yards) last week vs. Dallas. But, the Jets don't have an edge rusher of that quality. Coach Robert Saleh will have to dial up blitzes, as his front four can't get much pressure (30th in pressure rate). So that is one big matchup to watch in this game.

The Bengals have trailed by double digits in the first half of the last four games dating back to last year's playoffs. Eventually, Cincinnati will get it together … right? That's a discussion for another day.

The Jets' safeties have been atrocious, getting roasted for three deep scores against Lamar Jackson in Week 1. The Bengals have faced two bad QBs — Cooper Rush and Mitchell Trubisky — and now they face Joe Flacco. The game feels like it has shootout potential, as the Jets' rookie skill players made a massive leap from Week 1 to 2.

The total has already climbed from 43 to 45. You missed the best number, but over 45 is the pick.

PICK: Over 45 total points scored by both teams combined at FOX Bet (at time of pick)

Are you ready for the NFL season? If so, head over to FOX Bet for all your wagers.