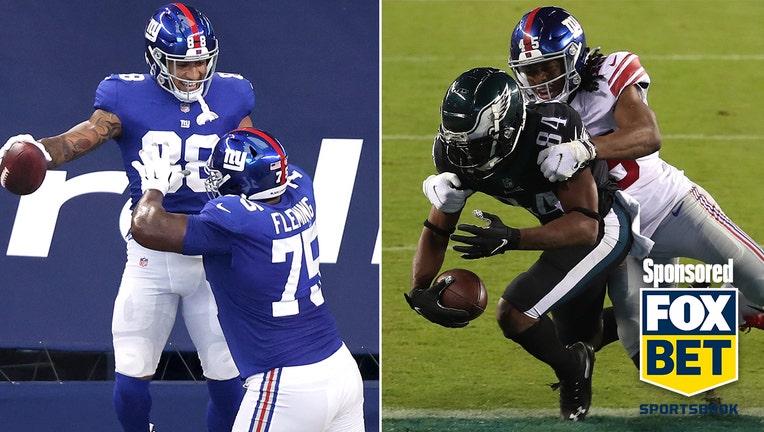 LEFT: Evan Engram #88 of the New York Giants is congratulated by Cameron Fleming #75 after scoring a touchdown against the Dallas Cowboys at AT&T Stadium on October 11, 2020 in Arlington, Texas. (Photo by Tom Pennington/Getty Images) RIGHT: Greg

The division leader is under .500 and somehow improved upon its lead during its bye week.

As the Philadelphia Eagles took its off week last Sunday, they were helped out by the fact that the New York Giants beat the Washington Football Team to extend the Birds’ lead to 1 ½ games in the division.

And yet, the Eagles are not out of the woods. And with a brutal upcoming schedule that features non-divisional games against the Packers, Seahawks, Saints, Browns and Cardinals still up ahead, they continue to need to bank away divisional wins like Sunday’s rematch with the Giants (1 p.m., FOX) if they want to repeat as NFC East champions.

There are plenty of Custom Bets available at the FOXBet.com Sportsbook for you to choose upon. One of the possibilities to keep an eye on is for Eagles receivers Travis Fulgham, Jalen Reager and Dallas Goedert all to score touchdowns. That is at +1900.

The history
This is the second meeting of the year between the two teams with the Eagles posting a 22-21 victory that was sealed with 40 seconds left on Carson Wentz’s touchdown pass to Boston Scott. The Eagles are seeking their ninth straight win over the Giants dating back to Nov. 6, 2016- a 28-23 New York win at MetLife Stadium.  The Eagles have won 13 of the past 14 in the series and are 21-4 in the last 25 games, including one playoff victory in 2009.

The main storylines to watch
The Giants are looking like a team that is starting to take towards a rebound, with two wins over Washington in the past four weeks and five straight games that have been decided by three points or less. Seven of their nine games have been decided by one possession. One of the areas that they need to clean up- Daniel Jones has turned the ball over way too much with more interceptions (9) than touchdown passes (8). Still, the Giants defensive front can make life difficult like they did three weeks ago in the first meeting between the two.

If possible, the Eagles have been uglier than their 3-4-1 record may indicate. Carson Wentz’s struggles include 12 interceptions and five fumbles. Miles Sanders, however, is scheduled to return for the Birds to add stability to the running game. And Wentz’s receivers like Fulgham, Reager and Greg Ward have all added stability to a position that has struggled for years.