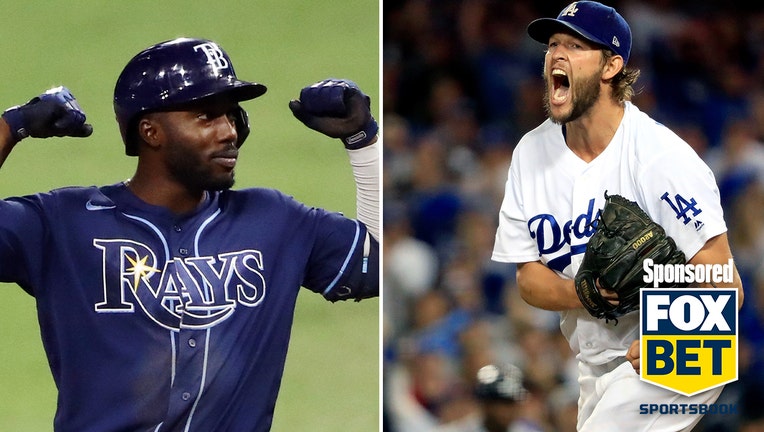 LEFT: Randy Arozarena #56 of the Tampa Bay Rays celebrates a single against the Houston Astros during the ninth inning in Game Three of the American League Championship Series at PETCO Park on October 13, 2020 in San Diego, California. (Photo by Ezra

The MLB World Series is pure Americana. It is falling leaves, crisp nights, bonfires and pulsating tension. And when the teams with the best records in the American and National Leagues find their way through the post-season tournament to get to the biggest stage, it adds another level of intrigue.

That’s what is at play this year as the AL champion Tampa Bay Rays meet up with the NL title-winning Los Angeles Dodgers get together in a unique World Series, which begins with Game 1 on Tuesday night at Globe Life Field in Arlington, Texas. Game 1 is set to begin at 8:08 p.m. Every game of the series will be seen on Fox.

The World Series is a great reason to sign up for a FOX Bet account today. If you live in Pennsylvania, New Jersey or Colorado, all you have to do is download the app and set up an account.

History of the franchises

Meanwhile, the Rays are making their second trip to the World Series in their 22-year existence. In 2008, they lost in five games to the Philadelphia Phillies during their first trip to the Fall Classic. Tampa Bay is making its sixth appearance in the post-season after winning its third American League East title.

In an attempt to prevent a wide-spread outbreak during the Coronavirus pandemic, Major League Baseball decided to hold the World Series at a neutral site - Globe Life Field, the brand new home of the Texas Rangers - in order to limit travel and exposure to the disease.

Tampa Bay beat the New York Yankees in the AL Division Series and the Astros in the ALCS at Petco Park in San Diego.

Since they’ve become an October regular in 2013, the Dodgers are filled with familiar names to the national stage. Clayton Kershaw will go down as one of the most dominant pitchers in the modern era. Kenley Jansen has been as reliable closers as there has been in baseball over the past five years- although he has struggled this year. Cody Bellinger and Justin Turner have been solid middle of the lineup forces. They have been joined this year by former American League MVP Mookie Betts- who has a World Series ring with the 2018 Boston Red Sox.

Meanwhile, the Rays play in almost anonymity because of their small market nature that relies on an incredibly deep farm system that produces pitchers like Blake Snell, who has a Cy Young to his name. The Rays also play incredible defense, led by centerfielder Kevin Kiermaier. The standard of the American League Championship Series was MVP Randy Arozarena, who had seven homers in the series against the Astros. Tampa Bay has one of the top tacticians in manager Kevin Cash, who works his parts perfectly to a 40 win season in 2020’s 60-game schedule.

It is one of the biggest sporting events of the year and FOXBet.com is the place you should go to get all the latest odds and prop bets to help you make your selection. Sign up today.