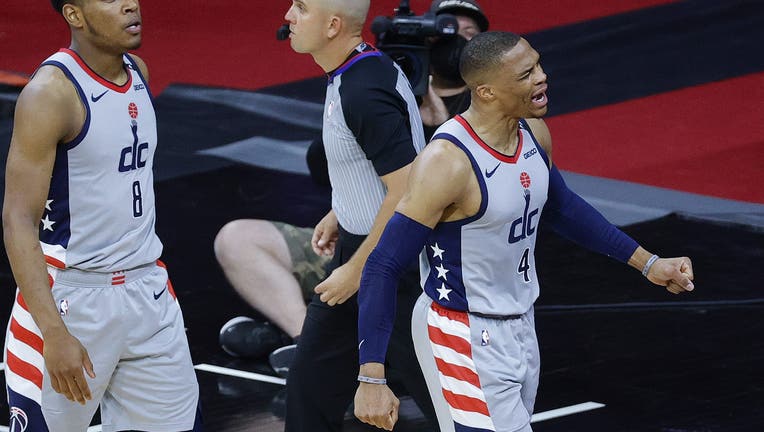 Russell Westbrook #4 of the Washington Wizards (R) reacts to a call during the second quarter against the Philadelphia 76ers during Game Two of the Eastern Conference first round series at Wells Fargo Center on May 26, 2021 in Philadelphia, Pennsylva

PHILADELPHIA - A fan accused of throwing popcorn on Washington Wizards star Russell Westbrook has been banned from the Wells Fargo Center indefinitely, the Philadelphia 76ers announced on Monday.

The team released a statement on the incident on Thursday morning, a day after the incident during Game 2 of the Sixers first-round playoff series with the Wizards.

76ers officials announced that the fan would have his season tickets revoked immediately and he will be banned from all events at Wells Fargo Center indefinitely.

"We apologize to Russell Westbrook and the Washington Wizards for being subjected to this type of unacceptable and disrespectful behavior. There is no place for it in our sport or arena."

Television cameras captured the moment as Westbrook was escorted off the court after an apparent ankle injury.

A fan could be seen leaning toward the opening to the locker room tunnel, pouring what appeared to be popcorn.

Westbrook appeared to have been hit by some of the falling popcorn and began to walk back out of the tunnel as he shouted towards the stands. He was restrained by security.

After the game, Westbrook addressed the incident.

"I wouldn’t come up to me on the street and throw popcorn on my head, because you know what happens. ... In these arenas, you gotta start protecting the players. We’ll see what the NBA does."

Valerie Camillo, president of business operations for the Wells Fargo Center rebuked the fan in a statement.

"This was classless, unacceptable behavior, and we’re not going to tolerate it at Wells Fargo Center," Camillo said.

LeBron James spoke out about it on Twitter: "By the way WE AS THE PLAYERS wanna see who threw that popcorn on Russ while he was leaving the game tonight with a injury!! There’s cameras all over arenas so there’s no excuse!"