A 7-year-old girl from the Dallas area helped set a new record for the Junior Olympics. She said she practiced every day to do it, even in the summer heat.

DALLAS - While most kids spent their summer playing video games or lounging around the house, a 7-year-old from the Dallas area was training hard for the Junior Olympics.

Dakota White first made headlines last year when TikTok videos of her smoking the competition on the track went viral.

This past weekend, she and her teammates with Xpress Track Club in Fort Worth set a new record in the girls 8 and under 100-meter relay at the AAU Junior Olympics. Dakota ran her part in under 60 seconds, which was also a national record.

"I just run really hard," she said when asked how she does it. 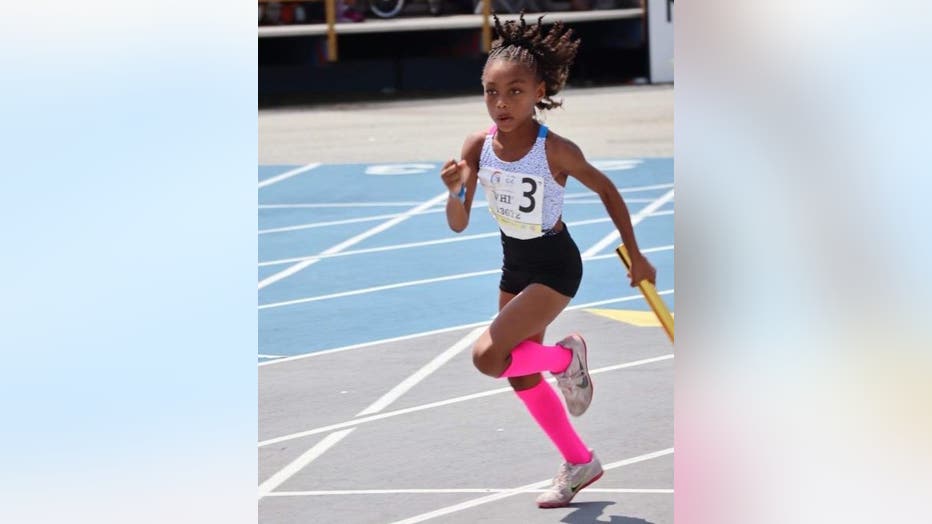 Dakota’s dad, Cam White, is a former TCU wide receiver. He started training with her when she was just 3 years old.

"She just had form, like crazy form. It wasn’t fast, but her form was already perfect. So then as she progressed, we started getting her different trainers," he explained.

He said by the time Dakota turned 6 years old she was winning all her races.

"She’s just excelling in a sport that she loves now," he said.

In a recent video on social media, Dakota shared her motto – No Days Off. She said she didn’t even take a day off this summer because of the heat.

Her dad said she did it with the help of a lot of water and hydration.

"Cut down on different snacks and foods, eating pretty healthy. As a kid, you know they like to eat a lot of junk food. Don’t get me wrong. I didn’t take a lot away from her, but we limited what she could eat," he said. "She trains hard."

While showing off her new Junior Olympics gold medal, Dakota said she has a lot of medals now.

Dad said they are all hanging up in her room next to pictures of her idol – LSU track star Sha’Carri Richardson, who is also from North Texas.