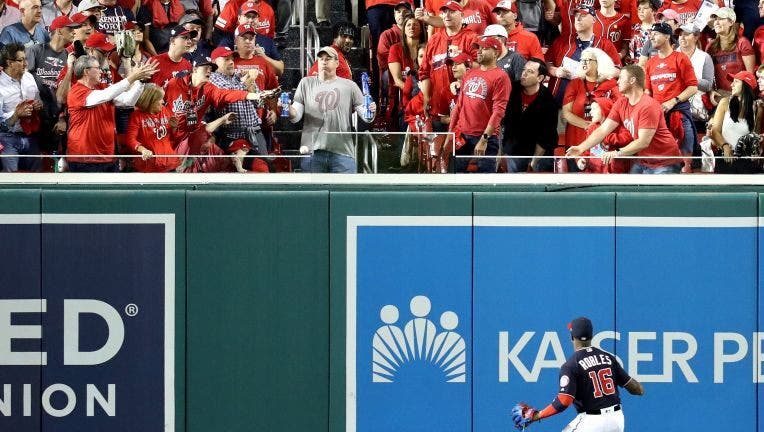 WASHINGTON, DC - OCTOBER 27: Victor Robles #16 of the Washington Nationals watches a two-run home run hit by Yordan Alvarez (not pictured) of the Houston Astros leave the park during the second inning in Game Five of the 2019 World Series at National (Photo by Rob Carr/Getty Images)

HOUSTON - When a home run ball came flying at him, he took it straight to the chest instead of dropping his beers. Now, Bud Light is rewarding the “hero”.

Washington Nationals’ fan Jeff Adams took a home run ball from the Houston Astros' Yordan Alvarez in left field during Game 5 Sunday. Many were impressed he didn't spill a drop.

Bud Light took to Twitter to ask for help identifying the “hero”.

Bud Light says they got in contact with him, and he’s now going to Game 6 in Houston.

They shared a photo of a specially made t-shirt featuring Adams that says “Always save the beers”.

"He's wearing this beauty to Game 6," they wrote.

Game 6 of the World Series is at Minute Maid Park on Tuesday.

You can watch the World Series on FOX 26.