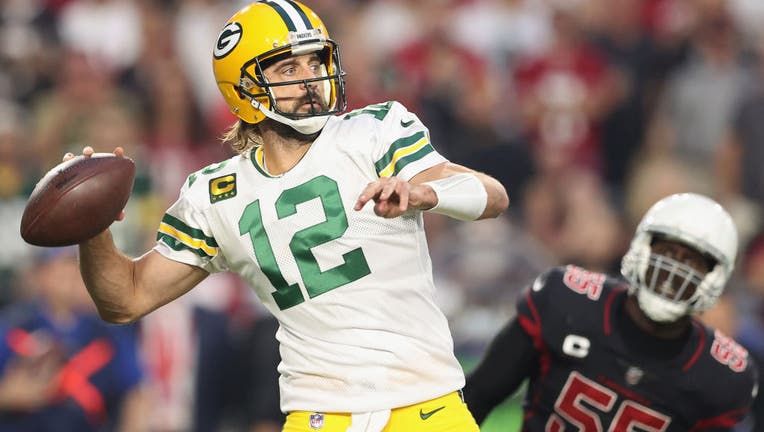 GLENDALE, ARIZONA - OCTOBER 28: Quarterback Aaron Rodgers #12 of the Green Bay Packers throws a pass during the NFL game at State Farm Stadium on October 28, 2021 in Glendale, Arizona. The Packers defeated the Cardinals 24-21. (Photo by Christian Pet

GREEN BAY, Wis. - The fallout from Aaron Rodgers explaining the reasons why he chose to be unvaccinated against the coronavirus is reportedly irking the Green Bay Packers superstar quarterback.

Rodgers on Friday appeared on "The Pat McAfee Show" and went into great length about the reasons why he’s unvaccinated and maintained he didn’t lie when he told reporters in August he was "immunized." The star quarterback went into a litany of detail explaining the homeopathic treatments he received, the "research" he brought to NFL doctors and consulting Joe Rogan about treating it.

On Monday, People reported the 2020 NFL MVP is unhappy with the further criticism he’s received.

Rodgers "feels like he just shared his point of view, and now he's being crucified for it," a source told People.

"He knew some people would disagree with him, but he didn't know that it would become the s---storm it became. People who he thought were friends are turning on him.

"He's upset. He's very unhappy with the response to him."

Rodgers hasn’t spoken since his interview on "The Pat McAfee Show." In the interview, Rodgers took shots at the NFL media for ripping him and made it a point to say he would’ve explained himself if anyone asked him to explain what he meant when he said he was immunized. Additionally, he said he was allergic to some of the ingredients in the Pfizer and Moderna vaccines and chose not to get the Johnson & Johnson vaccine due to some of its side effects.

"I'm not an anti-vaxx, flat-earther. … I have an allergy to an ingredient that's in the mRNA vaccines. I found a long-term immunization protocol to protect myself, and I'm very proud of the research that went into that," the Packers star added.

Rodgers also cited concerns about the potential of becoming infertile from the vaccines, despite experts from Johns Hopkins Medicine saying COVID-19 vaccines are not linked to infertility. He said the Packers knew what his vaccination status was. He also complained about the protocols for the players.

"Some of the rules, to me, are not based in science at all. They’re purely trying to out and shame people, like needing to wear a mask at a podium when every person in the room is vaccinated and wearing a mask – makes no sense to me," Rodgers said. "If you got vaccinated to protect yourself from a virus I don’t have as an unvaccinated individual then why are you worried about anything I could give you?

"I have followed every single protocol to a T – minus the one I just mentioned because it actually makes no sense to me. My daily routine is the routine of an unvaccinated person."

Rodgers said he consulted with Rogan about alternative treatments, including ivermectin, and called him a friend. In August, the FDA warned against those infected with COVID from using ivermectin.

In addition to stating his case for not getting vaccinated, Rodgers invoked Martin Luther King Jr.

"As an aside, the great MLK said, 'You have a moral obligation to object to unjust rules and rules that made no sense.’ In my opinion, it makes no sense to me. I test every single day. Every single day," Rodgers said.

Rodgers is now facing an inquiry from the NFL over whether he broke league protocols. He could face fines at the very least as punishment. He was dropped by Prevea Health over the weekend after his statements but was backed by State Farm.

He’s expected to play Sunday should he continue to test negative.

Contact 6 got back thousands for FOX6 viewers in October

Speaking with customer service can be time-consuming and stressful. When consumers can’t get the help they need, they can try Contact 6.