Rapper Young Thug, whose real name Jeffery Williams, made a court appearance Tuesday afternoon. He was named in an 88-page indictment for alleged gang activity and violating the RICO Act. A total of 28 people were listed in that indictment including Williams.

ATLANTA - Atlanta rapper Young Thug has been charged with additional offenses relating to drugs and weapons following his indictment and arrest at his Buckhead home on racketeering and gang-related charges.

Williams was arrested on Monday during a raid on a Buckhead mansion following his indictment. Tuesday,

He had previously charged with participation in criminal street activity and conspiracy to violate the Racketeer Influenced and Corrupt Organizations Act, according to the indictment. The indictment outlines specific charges against Williams and his 27 associates. The court document refers to the group as the  "Young Slime Life" (YSL) enterprise, and stated that members "conspired to associate and with others for the common purposes of illegally obtaining money and property through a pattern of racketeering activity and conducting and participating in the enterprise through a pattern of racketeering activity." 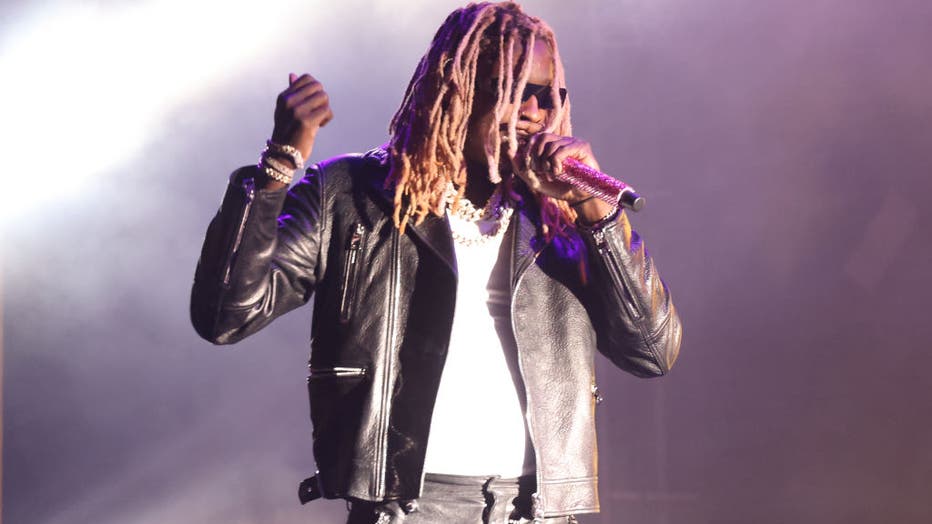 The indictment lists more than 180 acts that support just the first of the 56 separate charges handed down to the various members of the YSL. Among those other charges are murder, aggravated assault, firearms violations, theft, drug possession, participating in street gang activity, armed robbery, and carjacking between 2012 and 2020.

"It does not matter what your notoriety is, what your fame is, if you come to Fulton County, Georgia, and you commit crimes, ... you are going to become a target and a focus of this district attorney’s office, and we are going to prosecute you to the fullest extent of the law," Fulton County District Attorney Fani Willis said Tuesday at a news conference announcing the charges.

WIllis said Williams is one of three founding members of the so-called "Young Slime Life" (YSL) enterprise, which associates with the Blood street gang. The 88-page indictment filed on Sunday outlines 180 acts that support just the first of the 56 separate charges for 28 members of gang.

Rapper Gunna arrested on RICO charges as part of indictment

The rapper, whose real name is Sergio Kitchens, was booked into the Fulton County Jail on RICO charges. He's slated to have his first appearance in court Wednesday.

What is the "Young Slime Life" enterprise?

The "Young Slime Life" enterprise started as a street gang in the Cleveland Avenue area of Atlanta in 2012, according to the indictment. Williams, who also goes by "Slime," along with Murphy, who goes by "DK," and Stephens, who goes by "Tick" or "Slug," create it as an affiliate of the national Bloods gang, the court document states. Williams has been known to reference it in his songs and on social media. The indictment stated that in its 10 years, it has expanded to include "the surrounding metropolitan Atlanta area."

Some YSL members claims close ties to Blood subset gangs SexMoneyMurder or 30 Deep, the indictment continued. Associates wear red for the Bloods and green for Slime. The indictment states they also wear clothing that has "YSL" or "Slime" on it. They also might have similar pendants with those words or "SLATT" on it.

Like many gangs, YSL uses a variety of hands signs. The indictment outlines a couple including the wiping of the nose with the index finger. Another hand sign is the curling of the ring and pinky fingers inward towards the palm. 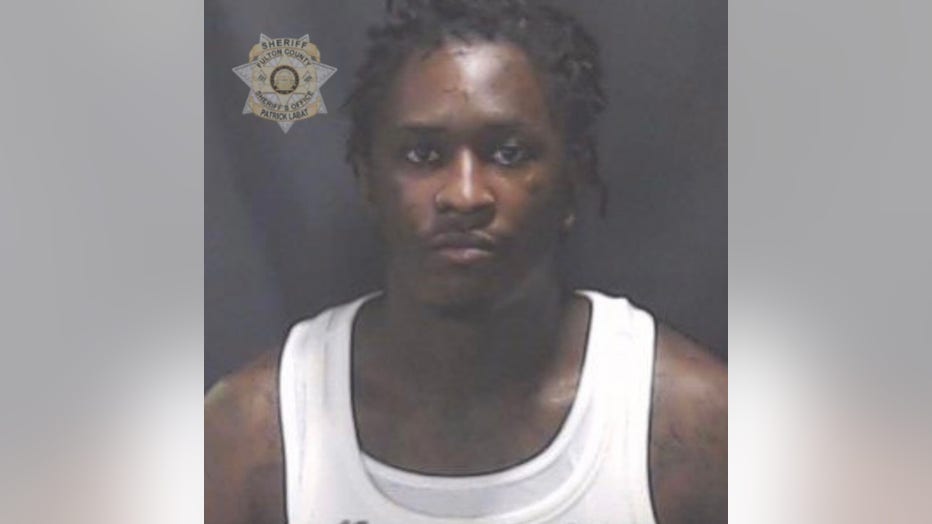 Jeffery Lamar Williams, who goes by the stage name Young Thug, was arrested on May 9, 2022. (Fulton County Sheriff's Office)

Members will also make "the 'two guns' hand sign by forming pistols with their ﬁngers, and pointing them in opposite directions."

"They also refer to Cleveland Avenue as 'Bleveland,' replacing the 'C' with a 'B.' Green Heart, Green Snake, Blowing Nose, and Green Vomit emojis, are also symbols commonly used by members of YSL," the indictment reads.

The judge told Williams during his hearing on Tuesday that bond could not be set for the 30-year-old rapper due to the indictment.

"Jeffery Williams, who performs as "Young Thug," vehemently denies the allegations lodged against him in the Fulton County (Georgia) Indictment of May 9, 2022. We look forward to the opportunity to defend this case in court. We filed a Motion for Bond and anticipate a hearing in the near future. We will fight this case ethically, legally and zealously. Mr. Williams will be cleared."

No date has been set yet for that bond hearing.

Young Thug's arrest has thrust the common, but complex charge of RICO back into the public spotlight.

The Justice Department has used RICO to dismantle multiple crime families including the Gambions and also has helped to weed out corruption in several city police departments including those in Key West and Los Angeles. Prosecutors have also used RICO to try to dismantle several street gangs and helped in prosecuting businesses that break federal law.

Georgia’s RICO statutes are similar to the federal version , but are much broader in that the criminal "enterprise" does not have to be around as long. Georgia is one of only 33 states that has its own RICO statutes. However, in both state and federal laws, a pattern of criminal enterprise has to be established.

Violating RICO carries a maximum of 20 years and a fine that is "greater of $25,000 or three times the amount of pecuniary gain."

Under RICO, victims impacted can seek civil recourse without the defendant being able to hide behind bankruptcy to skirt judgement or restitution.