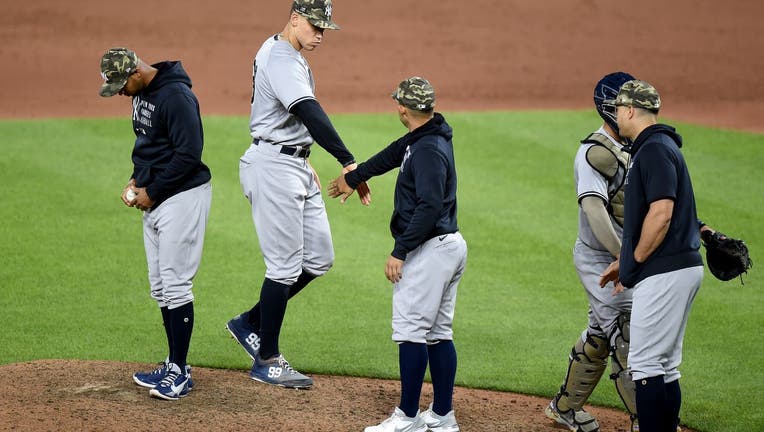 Aaron Judge #99 of the New York Yankees celebrates with teammates after a 8-2 victory against the Baltimore Orioles at Oriole Park at Camden Yards on May 15, 2021 in Baltimore, Maryland. (Photo by Greg Fiume/Getty Images)

BALTIMORE (AP) - The New York Yankees have had another positive COVID-19 test, this one involving a staff member, manager Aaron Boone said before their game against the Orioles on Sunday.

Boone did not identify the staff member, saying he was part of the team’s support staff. Another staff member was not available because of contact tracing.

The Yankees have had nine total positives within the traveling party since Monday — three coaches, five staffers and shortstop Gleyber Torres.

"We're just doing the best we can with it," Boone said. "Fortunately, he's another one that feels good. So we'll just continue to try and be vigilant and handle it as best we can."

The Yankees will have another staff member travel with the team to Texas. The latest staff member that tested positive is being quarantined in Baltimore.

Last week, the Yankees revealed that Torres tested positive for the coronavirus despite being fully vaccinated and previously having COVID-19. He is quarantining in Tampa, Florida.

In addition to Torres, the Yankees have three coaches and four traveling staffers that are breakthrough positives, meaning they tested positive despite being fully vaccinated.

In addition, outfielder Aaron Hicks was placed on the 10-day injured list on Sunday, retroactive to Thursday, after tearing a tendon sheath in his left wrist. The club tried to treat the injury with medication.

"When he tried to swing from both sides of the plate, it wasn’t what he was looking for or what we were looking for," Boone said.

In a corresponding move, the Yankees promoted outfielder Ryan LaMarre from Triple-A Scranton/Wilkes-Barre and he started in center field.