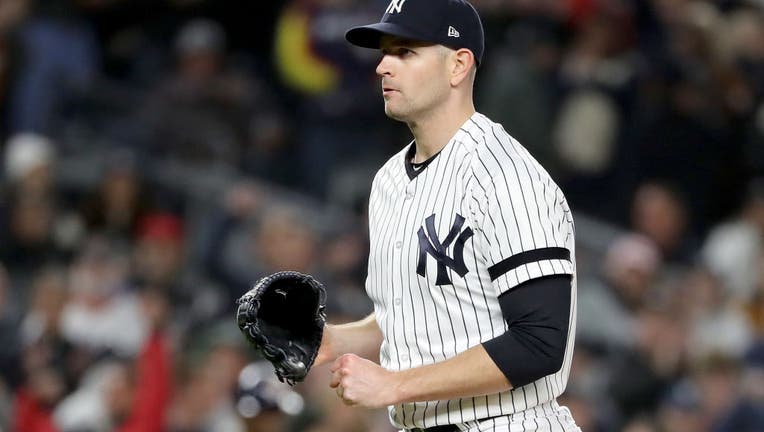 NEW YORK, NEW YORK - OCTOBER 18: James Paxton #65 of the New York Yankees walks back to the dugout after closing out the top of the top of the second inning against the Houston Astros in game five of the American League Championship Series at Yankee

ORLANDO, Fla. (AP) — Hal Steinbrenner talked about his goals for the New York Yankees over the next two months.

"I just want to get through spring training healthy," the Yankees owner said Wednesday afternoon.

New York just finished a full calendar decade without a World Series appearance for the first time since the 1910s. Brett Gardner is the only player left from the last championship team in 2009.

Right-hander Gerrit Cole was signed to a $324 million, nine-year contract, the type of flashy free-agent deal Hal's father, George Steinbrenner, was known for.

"He's going to be a game changer for us," Hal Steinbrenner said. "The city's buzzing, and it's continued since the day we signed him."

Paxton's injury opens up one of the few competitions heading into spring training — for fifth starter.

"We know we've got a solid infield. We've got a solid outfield. Obviously, we've got a solid rotation and a solid bullpen," Hal Steinbrenner said. "So it's nice to feel confident when you're going into the season, and I do. I believe we had a championship-caliber team last year and the year before. I think we absolutely did. We're even better this year if we can stay healthy."

Cole, the only major addition, heads a rotation projected to include righties Luis Severino and Masahiro Tanaka and lefty J.A. Happ. New York starters had a 4.51 ERA last year, 15th among the 30 teams.

Lefty Jordan Montgomery, who returned in September from Tommy John surgery, will compete with right-handers Luis Cessa and Jonathan Loaisiga and rookies Deivi Garcia and Michael King to join the rotation for the first two months.

"There's a competition now for whoever wants to step up and take it," general manager Brian Cashman said.

Right-hander Domingo Germán, who went 18-4 with a 4.03 ERA last year, will serve the final 63 games of an 81-game suspension for violating Major League Baseball's domestic violence policy and is eligible to return June 5, barring any postponements,

At the start of the season, the most significant rookies may be in the dugout, clubhouse and weight room. Matt Blake takes over as pitching coach from Larry Rothschild, who was fired after nine seasons, and Blake promises a more analytic approach. After the Yankees had a big league record 30 players make a combined 39 trips to the injured list last year, Eric Cressey was hired in the new role of director of player health and performance. The 38-year-old founded Cressey Sports Performance , which specializes in kinesiology and biomechanics.

"We're really going to change the whole culture down in our clubhouse, from the weight room, training room, physical therapy, mental health, performance science," Steinbrenner said. "And I think all the changes we made or are going to enable us to be a much healthier, stronger team."

New York's position players include catcher Gary Sánchez, first baseman Luke Voit, second baseman DJ LeMahieu, shortstop Gleyber Torres and third baseman Gio Urshela. The primary outfield until Aaron Hicks returns from Tommy John surgery is Giancarlo Stanton in left, Gardner in center and Aaron Judge in right. The bullpen had a 4.08 ERA last year, ninth in the majors, and was fifth with 750 strikeouts as Boone never used a pitcher three days in a row during the regular season. Aroldis Chapman is back along with Zack Britton, Adam Ottavino, Chad Green and Tommy Kahnle.

Hicks, a switch-hitter, is not expected back until June or July following Oct. 31 surgery on his right elbow, leaving Gardner as the only lefty batter among regulars. That could lead to increased plate appearances for first baseman Mike Ford, outfielder Michael Tauchman and utilityman Tyler Wade, all lefty bats. Stanton figures to see some time at DH, allowing Tauchman to play left. When Hicks returns, Gardner will go back to left.

Miguel Andújar, the 2018 AL Rookie of the Year runner-up, is coming back from right shoulder surgery on May 20 and may have lost the third base job to the slick-fielding Urshela. Andújar is working out at third base, first base and left field.

Kyle Higashioka is the top candidate for backup catcher behind Sánchez, with non-roster invitees Erik Kratz, Chris Iannetta and Josh Thole trying to beat him out.

New York opens at woeful Baltimore on March 26 after going 17-2 against the Orioles last year. The Yankees' home opener is April 2 against Toronto.