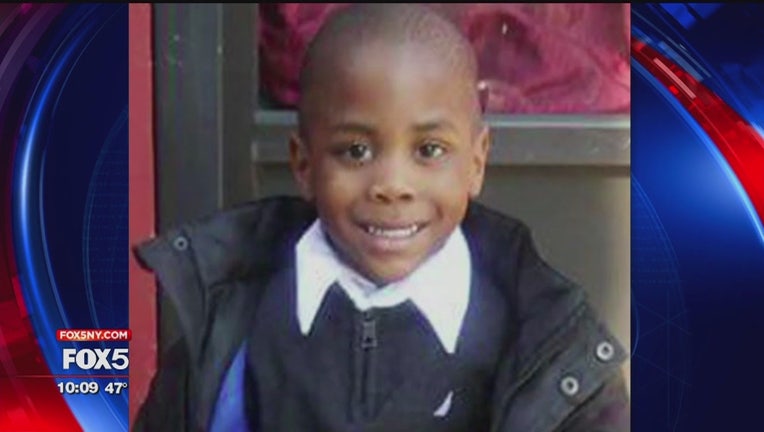 NEW YORK (AP) — A Manhattan jury convicted a man Wednesday for the murder of his ex-girlfriend's 6-year-old son, Zymere Perkins, whose death ignited changes to the city's family service system.

Rysheim Smith, 46, of Harlem, was convicted of murder, manslaughter, reckless endangerment and assault in connection with the Sept. 26, 2016, death of Zymere. Smith was the boyfriend of Zymere's mother, Geraldine Perkins, at the time of the child's death.

Prosecutors said that Smith and Perkins both beat the boy, with the most fatal blows coming from Smith. Perkins agreed to plead guilty to manslaughter in exchange for testifying against Smith.

Zymere was starved and tortured for months, prosecutors said.

“The death of Zymere Perkins was an unthinkable tragedy that sent shockwaves through the city and inspired a reckoning with how our social services system works to protect New York’s most vulnerable,” said Manhattan District Attorney Cyrus R. Vance, Jr. in a statement. “As proven at trial, Zymere was an innocent and helpless six-year-old boy who suffered unconscionable, ongoing violence at the hands of Rysheim Smith."

On the day of the child's death, Smith became upset because Zymere defecated inside the family’s Harlem home. Prosecutors said Smith then beat the boy unconscious.

Perkins testified that Smith cursed at her son and poked him in the stomach with a broomstick. She said Zymere probably didn't use the bathroom because there wasn't any electricity in the home, and he was scared of using the restroom in the dark.

Perkins said Smith later waterboarded the boy before pulling a shower rod down on him and beating him again.

Smith went out to get breakfast following the beating, Perkins said, also admitting that she did not do anything to stop him during the attack.

She said she cleaned Zymere's body, read her bible and did her makeup and her hair before taking her son to the hospital.

Smith's attorneys attempted to sway jurors that Perkins was responsible for the child's death. But prosecutors said Perkins shares the responsibility with Smith.

She received a two-to-six-year prison sentence in exchange for her testimony.

The state Office of Children and Family Services detailed multiple failings by the Administration for Children’s Services and ordered Democratic Mayor Bill de Blasio to appoint an independent monitor to oversee the agency for their handling of Zymere. The agency’s commissioner resigned and three ACS officials were fired.

Smith is scheduled to be sentenced in March 27.