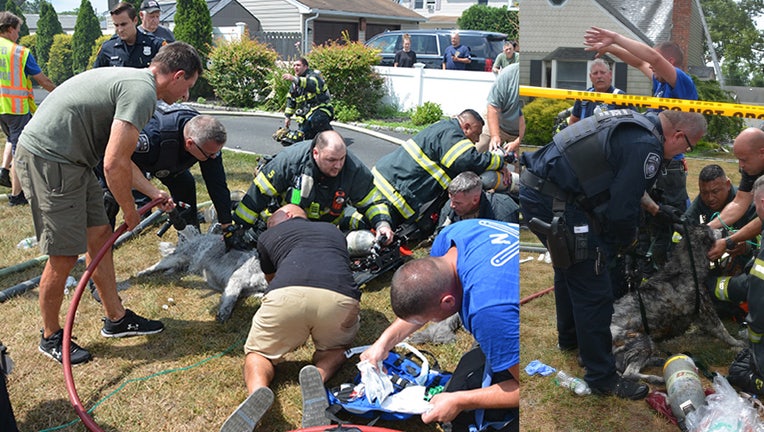 It happened at about 11 a.m. Sunday in Islip Terrace.

A 19-year-old woman and three dogs were inside the home. After he entered the home, the woman made a 911 call saying she was trapped in the basement. Islip Terrace Firefighters Matthew Arthurs and Danny Blasucci broke the basement window and pulled the woman out.

East Islip Fire Department Firefighter Vinny Bologna escorted the woman to be evaluated by medical personnel at the scene. EMS took her to a hospital with non-life-threatening injuries.

Gunst, who is part of the police department’s Medical Crisis Action Team (MedCAT) and recently participated in medical training to aid police canines, provided advanced medical support to two of the dogs.

Emergency Service Section officers placed the dogs in harnesses and carried them to police cars that took them to Veterinary Medical Center of Long Island in West Islip.

Police Officer Eileen Nieves provided aid to one of the dogs during the transport. All three dogs are expected to survive.

The cause of the fire was still being investigated.