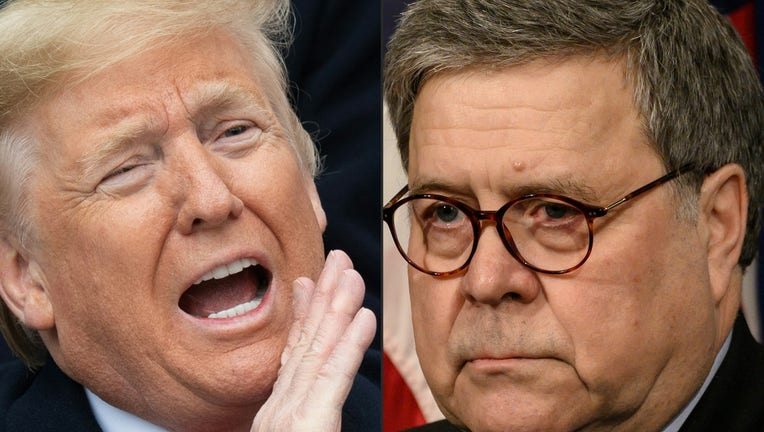 This combination of pictures created on February 14, 2020 shows US President Donald Trump speaking after signing the United States-Mexico-Canada Trade Agreement, known as USMCA, during a ceremony on the South Lawn of the White House in Washington, DC (Photo by SAUL LOEB,ANDREW CABALLERO-REYNOLDS/AFP via Getty Images)

The White House says President Trump isn't "bothered" or deterred after Attorney General Bill Barr told ABC News on Thursday that the president's tweets "make it impossible for me to do my job," in an unusual swipe at the president -- although Barr emphasized that Trump "has never asked me to do anything in a criminal case."

Barr's unexpected comments came days after Trump, in a late-night tweet earlier this week, criticized career Justice Department prosecutors for recommending a nine-year prison sentence for his former advisor Roger Stone. Senior DOJ leaders then intervened and adjusted the sentencing recommendation downward, saying it was clearly excessive given Stone's obstruction-related offenses. All four prosecutors on the case stepped down within hours.

"I think it’s time to stop the tweeting about Department of Justice criminal cases," Barr said. "I'm not going to be bullied or influenced by anybody ... whether it’s Congress, a newspaper editorial board, or the president.”

Barr continued, "I'm gonna do what I think is right, and you know... I cannot do my job here at the department with a constant background commentary that undercuts me."

The attorney general said he could not "assure the courts and the prosecutors and the department that we're doing our work with integrity" if the White House appeared involved in DOJ decisionmaking for political or personal reasons.

Barr said he was "of course" ready for blowback from Trump for his comments, although he said he was focused only on doing his job. South Carolina GOP. Sen. Lindsey Graham quickly tweeted support for Barr, saying Barr has his "complete confidence" and that the president did "a great service" to the DOJ and the "nation as a whole" by appointing Barr.

“The president wasn’t bothered by the comments at all and he has the right, just like any American citizen, to publicly offer his opinions," Grisham said. "President Trump uses social media very effectively to fight for the American people against injustices in our country, including the fake news.  The President has full faith and confidence in Attorney General Barr to do his job and uphold the law."

Barr and Trump are united in their belief that Trump and his allies have been unfairly targeted, Fox News is told. Republicans have long pointed to the fact that prominent anti-Trump figures, including former FBI Deputy Director Andrew McCabe, have avoided prosecution even though they have admitted to leaking and lying to federal investigators.

Barr, speaking to ABC News, said that even prior to Trump's tweet Monday night about the nine-year Stone sentencing recommendation, he was surprised to hear that DOJ prosecutors had sought the harsh penalty -- both because it was inconsistent with the prosecutors' previous discussions with main DOJ and because it did not seem "fair and reasonable" given the facts of the Stone case.

"I was very surprised," Barr said. "Once I confirmed that that's actually what we filed, I said that night to my staff that we had to get ready, because we had to do something in the morning to amend that, and clarify what our position was."

The next day, senior DOJ officials intervened and amended the prosecutors' sentencing recommendation downward, although top DOJ brass have repeatedly said their decision was independent of Trump's wishes.

Some Democrats have said Trump could face another impeachment over the episode, which seemingly undercut the traditional separation of political considerations from DOJ prosecutorial decisions.

Conservative commentators have split over the issue, with some suggesting that career DOJ officials are properly supervised by elected politicians, and others praising Barr for condemning Trump's involvement. Others have argued that because Trump's tweet was public, his actions were similar to an exercise of the pardon power: a legally acceptable instance of oversight over an executive agency.

"I think it’s time to stop the tweeting about Department of Justice criminal cases."

DOJ officials said in the amended filing that while it was "technically" possible to argue that Stone deserved the severe federal sentencing enhancement for threatening physical harm to a witness, such a move would violate the spirit of the federal guidelines.

Stone has been convicted on seven counts of obstruction, witness tampering and making false statements to Congress on charges that stemmed from former Special Counsel Robert Mueller’s Russia investigation. Prosecutors charged that Stone lied to Congress about his conversations about WikiLeaks with New York radio host Randy Credico, although Stone was never linked to any criminal conspiracy to access or leak documents.

It would place Stone in a category of the guidelines that "typically applies in cases involving violent offenses, such as armed robbery, not obstruction cases," the government argued, noting that Stone's "advanced age, health, personal circumstances, and lack of criminal history" also counseled against the harsh penalty.

Specifically, prosecutors said that although Stone allegedly had threatened Credico’s therapy dog, Bianca -- saying he was "going to take that dog away from you" -- it was important to recognize that Credico has acknowledged that he "never in any way felt that Stone himself posed a direct physical threat to me or my dog."

A senior DOJ official confirmed to Fox News that senior leadership officials there made the call to reverse the initial sentencing recommendation, saying the filing on Monday evening was not only extreme, but also substantially inconsistent with how the prosecutors had briefed DOJ leadership they would proceed on the case. The "general communication" between the U.S. Attorney's Office and the main DOJ had led senior officials to expect a more moderate sentence, the official told Fox News.

In response to the new push for a lighter sentence, all the prosecutors on the Stone case, including several holdovers from Mueller's team, quit.

Then, prosecutor Adam Jed withdrew from the Stone case, as well. Michael Marando later announced he was off the case.

On Wednesday, Trump praised Barr's handling of the matter: “Congratulations to Attorney General Bill Barr for taking charge of a case that was totally out of control and perhaps should not have even been brought,” the president wrote on Twitter. “Evidence now clearly shows that the Mueller Scam was improperly brought & tainted. Even Bob Mueller lied to Congress!”

DOJ officials, meanwhile, expressed surprise at the growing profile of the matter.

"It's surprising that would be the line in the sand -- an amended filing," a senior DOJ official told Fox News, adding that the problem with the original sentencing recommendation was it told the judge that the only way to serve justice was a lengthy sentence.

"We're backing off from, 'It has to be this,'" the DOJ source told Fox News. "The amended filing says it's a serious crime, and prison time is appropriate; we're just saying it doesn't have to be 87 to 108 months."