HAVANA, Cuba - Joanne Chesimard is a convicted domestic terrorist who executed a state trooper, according to the FBI.

She has lived in Cuba for nearly 30 years where she is known there as Assata Shakur. But in the United States, law enforcement refers to her as Joanne Chesimard. That is the original name of the woman convicted in the death of a New Jersey state trooper.

Now that the two nations, the U.S. and Cuba, are repairing old political wounds, her case, and her fate, is back front and center.

Havana is a city where history hides out in the open. It is easy to see as you walk the old cobblestone roads, from the classic cars, Chevys and Fords, to constant reminders of the revolution etched across the heart of the island nation.

And on those same streets, where the communist movement took hold in 1959, American fugitives were once welcomed.

Among the most notable was Joanne Chesimard. In an audio recording explaining her case to the Vatican before the pope's visit in 1998, Chesimard said she saw her crimes as a "necessary step."

"Not only because I was innocent of the charges against me but because I knew with the racist legal system, I would receive no justice,” she said.

But justice, in this case, the concept of fairness, is as elusive as the fragile truce finally emerging between Cuba and the United States.

It was May 2, 1973, just after midnight. Chesimard and two other members of the Black Liberation Army, also known as the BLA, were stopped by New Jersey state troopers in East Brunswick.

Authorities say that during that time, there was a discussion with a trooper and the group. The trooper had asked for identification. The troopers discovered an ammunition clip, which triggered a confrontation followed by a bloody shootout

One of the BLA members was killed and 34-year-old trooper Werner Foerster is shot with his own service weapon.

Chesimard and the other surviving BLA member, Sundiata Acoli were charged with murder.

Investigators believe she fired the first shot, wounding the other trooper then took Foerster's gun and shot him twice in the head as he lay on the ground.

Her defenders maintain she couldn't have fired because she too was shot.

She spoke about it in a documentary.

In 1977, after a set of lengthy trials, Chesimard -- by then calling herself "Assata Shakur" -- was convicted and sent to the Clinton Correctional Facility for women.

She wouldn't be there long.

The escape happened on Nov. 2, 1979, two years after the conviction. Three members of the BLA posed as visitors at the prison. But once inside, they pulled pistols and took two guards hostage and eventually escaped with Chesimard in a prison van. She lived underground for several years. By the mid-1980s, Fidel Castro granted her asylum. 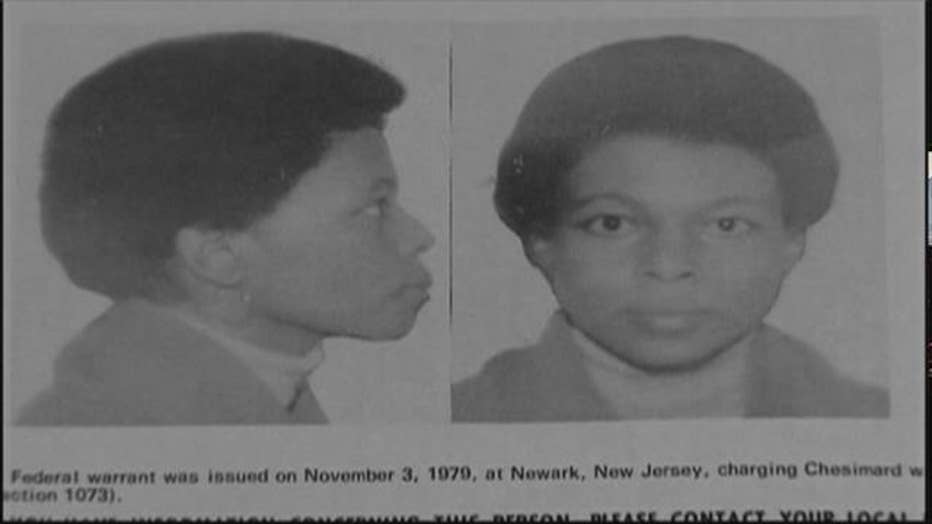 In the eyes of the FBI, the New Jersey State Police, New Jersey state troopers, this case has never been closed.

In 2013, 40 years after that night on the NJ turnpike, Joanne Chesimard was the first female added to the FBI's Most Wanted Terrorists list.

Richard Frankel is the special agent in charge of the FBI's Newark office.

The agency, along with the state of New Jersey, is offering a $2 million reward for the now 67-year-old fugitive.

Dr. Peniel Joseph a professor of African-American History at Tufts University says to truly understand the gravity of the Shakur case, you have to take into consideration the charged racial climate in the U.S. during the 1960s and 1970s.