Watch as Gov. Gavin Newsom picks 10 lucky vaccinated Californians to win $1.5 million in the Vax for the Win lottery.

In a made-for-TV main event from Universal Studios in Los Angeles, Access Hollywood host Scott Evans drew the numbers of the winners, all of whom must have received at least one vaccine dose to have been eligible for the random drawing.

They will not be identified unless they choose to; only the county they live in will be made public.

State health officials have the names of everyone who got vaccinated in a database and notify them by phone, email or text. Winners must answer in 96 hours or they forfeit the prize, which in fact, happened to at least two people from San Diego and Santa Clara counties in a previous $50,000 drawing.

The drawing was the grand finale to the nation’s largest vaccine incentive, called "Vax for the Win" out of a pot of $116 million.

Over the last couple of weeks, others have won prizes of $50,000, $50 gift cards and dream vacations.

Two of those winners were introduced on Tuesday: Both women each won $50,000 in a prior lottery. One woman, Aurelia, lives paycheck to paycheck and she said she was going to use the money to buy a new car and a laptop to replace her 13-year-old computer. Maybe, she said, she'd even take a trip to Portugal. The other woman quietly accepted her check with a smile on her face. 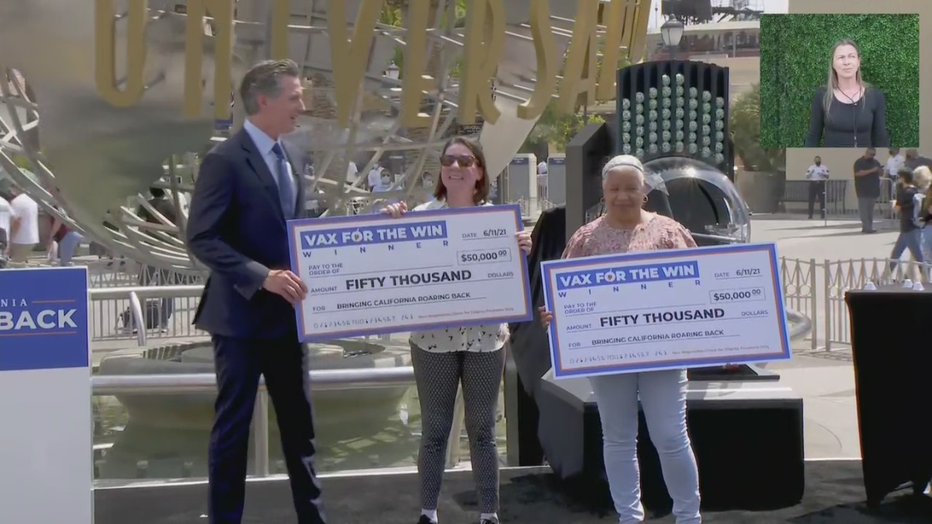 Winners can collect the money once they’re fully vaccinated.

Before the million-dollar winners were chosen, Newsom touted what's been accomplished over the 15 months: California now has one of the lowest rates of infection in the country, below 1%.

"Today is about hugging again," he said.

RELATED: Some guy in California named Tony is $50K richer because he got vaccinated

As Newsom spoke behind a "California Roars Back" podium, streams of theme park guests walked by in the background, enjoying rides and concessions. Most were wearing masks outside, even though they didn't have to if they were vaccinated.

Like other states around the country offering vaccine incentives, California is also banking on the hope that cash might get more shots in the arm.

Newsom's office said since the lottery began, about 2 million vaccine doses have been reported, including over 838,000 Californians newly starting their vaccination process. It's not clear what those numbers might have been without the incentives.

To date, California has administered nearly 40 million vaccine doses and more than 70% of the adult population has received at least one dose.

There are still regions in the state that are under-vaccinated.

For example, residents in Lassen County are only 26% vaccinated, while the vaccination rate in San Francisco and San Diego are well over 80%.

But people shouldn't think that the virus will never come back, or that people still can't get sick, even if they are vaccinated. Officials noted the outcropping of variants and increasing rates in other parts of the world, including Europe.

Despite the optimism, the United States marked a grim milestone as well.

The death toll on Tuesday from the coronavirus topped 600,000 people, according to data from Johns Hopkins University.

In a made-for-TV main event, the governor on Tuesday will draw 10 names of residents who have received at least one vaccine dose and award each one $1.5 million. The lottery will be streamed here at 10:30 a.m. PST.

The Associated Press contributed to this report. This story was reported from Oakland, Calif.