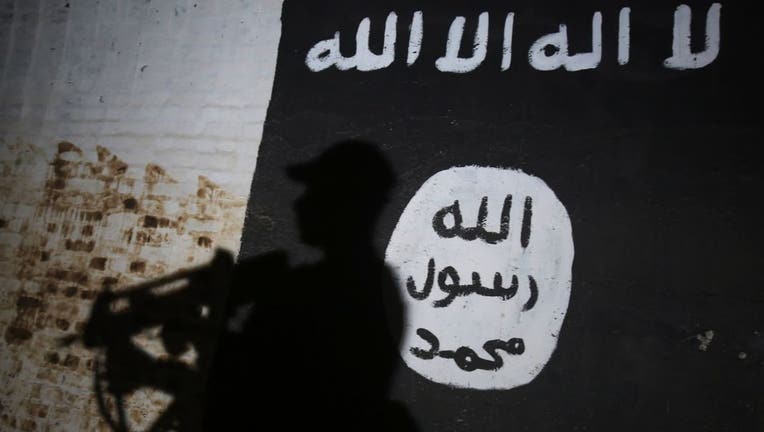 FILE - A member of the Iraqi forces walks past a mural bearing the logo of the Islamic State (IS) group on the southern outskirts of Mosul. (Photo credit: AHMAD AL-RUBAYE/AFP via Getty Images)

NEW YORK - Abu Ibrahim al-Qurashi or Abu Ibrahim al-Hashimi al-Qurayshi was an Iraqi and leader of the Islamic State.  He became the leader of the organization after the death of the previous leader Abu Bakr al-Baghdadi.  He was also known as Amir Muhammad Sa’id Abdal-Rahman al-Mawla.

He had been elected by a shura council as the new caliph of the Islamic State.

The U.S. designated al-Hashimi as a global terrorist and offered a $10 million reward for information that would lead to his capture.

He allegedly killed himself and members of his family in an explosion he triggered during a raid by U.S. troops in Syria.

On Thursday the White House issued a statement that:  "President Biden, Vice President Harris and members of the President’s national security team observe the counterterrorism operation responsible for removing from the battlefield Abu Ibrahim al-Hashimi al-Qurayshi — the leader of ISIS."

Biden said in a statement that he ordered the raid to "protect the American people and our allies, and make the world a safer place." He planned to address the American public later Thursday morning.

"Thanks to the skill and bravery of our Armed Forces, we have taken off the battlefield Abu Ibrahim al-Hashimi al-Qurayshi — the leader of ISIS," Biden said in a statement. He said all Americans involved in the operation returned safely.

Islamic State or Daesh is a militant Sunni Islamist organization.  It was founded by Abu Musab al-Zarqawi in Iraq during the U.S. invasion.

The group proclaimed itself a worldwide caliphate in 2014 and took over a large area of Syria and Iraq.  U.S. airstrikes and Russian military advances in Syria and Iraqi military attacks seriously reduced its capabilities and the land it controlled.

A December 2021 report by the Wilson Center, noted that al-Mawla hasn’t shown his face and the group has released almost no biographical details about him.

"Al-Mawla has not even given an audio address in which Islamic State members might hear his voice—a sharp break in precedent," the report said. "Some disaffected former members of the group have argued that it is contrary to the Sharia to pledge allegiance to a ghost, but that does not seem to have swayed opinion. If there was opposition to al Mawla’s ascension, it has not manifested on the battlefield."