A small group of masked men gathered in Danville over the weekend displaying banners, one of which read: "White Lives Matter." The city's mayor condemned the act and said the town stands firmly against hate. He added that free speech can be painful.

DANVILLE, Calif. - A group of masked protesters displayed a "White Lives Matter" sign on Saturday in Danville, an act of free speech that has been condemned by the town's mayor.

The sign was shown on the same day that an accused gunman allegedly fueled by racism killed 10 people and wounded three at a Buffalo supermarket in a predominantly Black neighborhood. Eleven of the people shot were Black, reports said.

Hoisting the White Lives Matter message in Danville was "clearly an abhorrent gesture towards people of color," said Mayor Newell Arnerich in a statement Monday.

"Those responsible made sure to cowardly cover their faces and hide behind their signs," Arnerich added. "These people were acting out hate speech."

The sign was placed on private property at the corner of Blackhawk Road and Camino Tassajara Road, the mayor's office said.

Another sign read, "Watch Europa the Last Battle." The latter is a 2017 film that many have called Nazi propaganda. 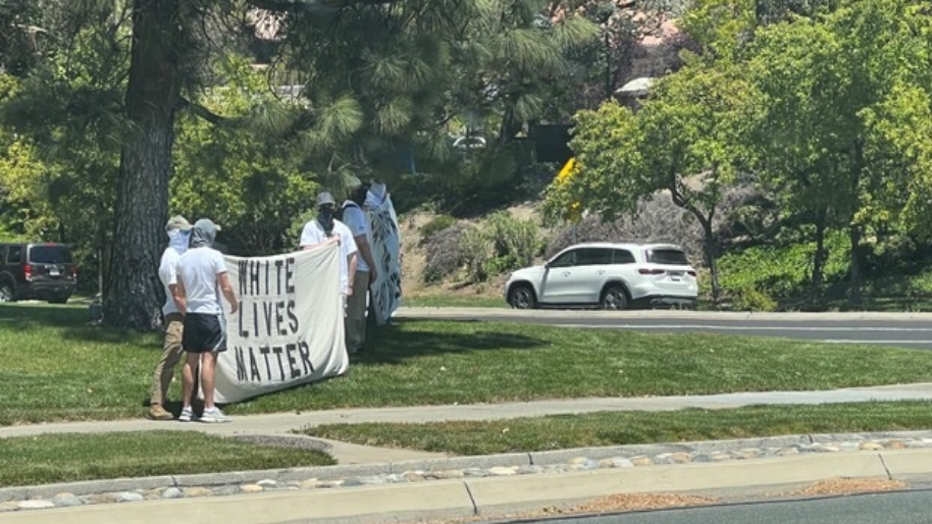 A group wearing masks displayed a sign reading "White Lives Matter" in Danville on May 14, 2022. Photo from Nextdoor.

"As most reasonable people do, I share the visceral reactions of many in our community to hate speech groups and hate in general," Arnerich wrote.

A group called White Lives Matter California tweeted photos and videos from the protest. They said they were engaged in "peaceful and legal activism."

Veronica Benjamin is a community activist with the group "Conscious Contra Costa."

She grew up in Danville and said there are racist attitudes that still exist in this area.

"Our town leadership has been very eager to maintain the status quo. We have been working with them for the past year to more explicitly denounce racism in a public way," said Benjamin.

Michelle Lucker said she moved to Danville with her family because it’s safe. But since she has arrived there have been high-profile police shootings and anti-Semitic flyers found on doorsteps.

"I think these men felt empowered to do this in Danville because of what’s been going on here in the last 3 or 4 years," said Lucker. She wants to see town leaders to a more public and permanent stand against hate. "This is the city we’ve chosen to raise our children in," said Lucker. "We have many friends of color and I can only imagine what those signs felt like to them. I mean it feels violent. It does."