Trailer for "Sonic the Hedgehog 2," in theaters April 8.

BROOKLYN, NY - Editor's note: This review originally ran on April 8, 2022 as "Sonic The Hedgehog 2" hit theaters. It has been republished in light of the film's recent premiere on Paramount+.

Though "Sonic the Hedgehog" lacked momentum and relied too heavily on Sonic’s hyperactive wisecracks, it was narratively economical, if only because the plot was pretty thin.

"Sonic the Hedgehog 2" follows the classic sequel strategy of providing more of the pleasures (or flaws, depending on your perspective) found in its predecessor. That obviously means more Sonic (sassily voiced by Ben Schwartz) and more of his mad scientist arch-nemesis Dr. Robotnik, played by Jim Carrey, whose wacky facial expressions might grace the big screen for the last time if his stated intention to retire from the film industry holds true.

The sequel is a half-hour longer than the first and separates the ensemble across the entire globe, from Hawaii to Siberia. Yet, Sonic’s quest still can’t support an entire film, no matter how extravagant or action-packed it might be.

About "Sonic the Hedgehog 2": Saving the world, one filler scene at a time 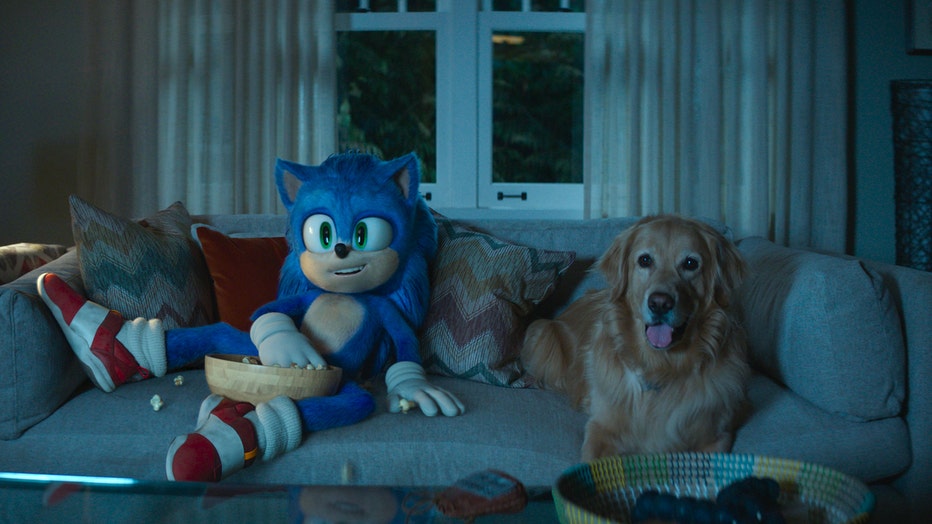 Per the "bigger is better" philosophy, "Sonic 2" features a more fantastical, high-stakes adventure than the first film, which mostly followed Sonic and his human pal Tom (James Marsden) on a road trip to San Francisco. A grander mission inevitably requires more characters from the Sega video game franchise on which the film is based, like the scrappy, tech wiz Tails (Colleen O'Shaughnessey) and the vengeful red echidna Knuckles (Idris Elba). That's somehow still not enough for director Jeff Fowler and the film's three screenwriters, hence the many strained digressions involving an outsized supporting cast, which includes Rachel (Natasha Rothwell), Tom’s wacky sister-in-law, and Robotnik’s sycophantic, latte-obsessed assistant Stone (Lee Majdoub).

WATCH FREE ON TUBI: Five seasons of "Adventures of Sonic the Hedgehog"

Sonic, eager to grow up and become a hero, gets a taste of independence when his now adoptive parents, Tom and his wife Maddie (Tika Sumpter), leave Sonic alone to attend Rachel’s wedding in Hawaii. Unfortunately, his carefree weekend plans go awry when Robotnik returns to Earth with the help of Knuckles, who believes that Sonic knows the location of the Master Emerald — a mystical gemstone with the power to restore balance to the universe (or send it into chaos).

Sonic is rescued by Tails, who accompanies him on a mission to get the Emerald before Knuckles does. Meanwhile, Robotnik agrees to help Knuckles track Sonic and Tails, but secretly schemes to steal the Emerald for himself.

SONIC THE HEDGEHOG 2 - "Knuckle Down"

The cast of "Sonic the Hedgehog 2" introduces a new character, voiced by Idris Elba.

Sonic’s race-against-time journey eventually morphs into a mission to save the world from Robotnik’s megalomaniacal plans, but "Sonic 2" frequently deviates from the main story into filler sequences, like a dance battle set to "Uptown Funk" and a catfishing subplot that’s not exactly appropriate for kids. In between these comedically desperate scenes, "Sonic 2" attempts to draw family-friendly lessons about friendship and maturity, mining Tails’ social alienation (due to his two tails) and Knuckles’ grief over the loss of his tribe for shallow pathos. Unfortunately, these emotional moments are so trite and tossed-off that they barely register as anything more than pat recognition that, yes, teamwork makes the dream work.

See "Sonic the Hedgehog 2" for a Jim Carrey variety show 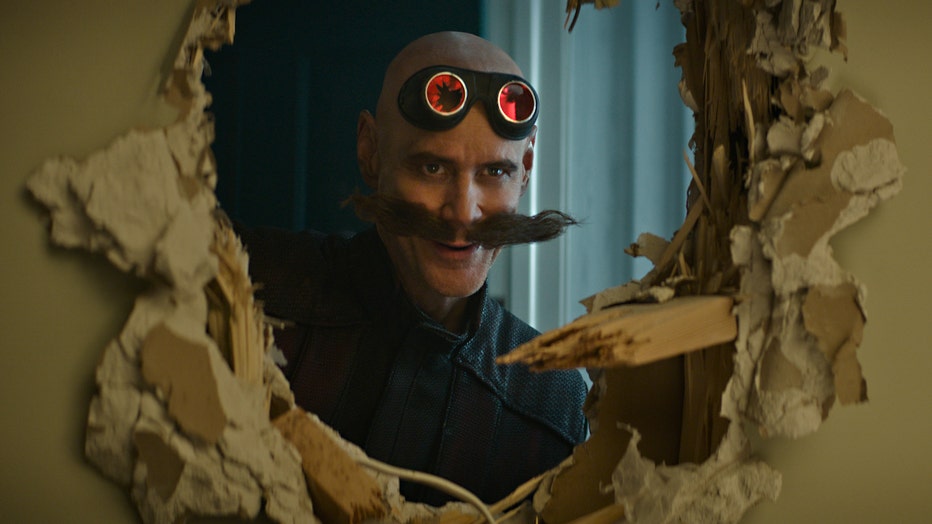 In spite of the script’s myriad blemishes, Carrey’s performance livens "Sonic 2" up a decent amount. Carrey only briefly got to stretch his comedic muscles in the first "Sonic," where Robotnik was mostly defined by his supercilious attitude. But "Sonic 2" gives Carrey ample opportunity to command the spotlight and make a meal out of every moment. He puts his unique topspin on every line of dialogue so that even exposition sounds madcap. In fact, when the film allows him to vamp, it frequently becomes a Jim Carrey variety show.

In the hands of a lesser actor, Robotnik would simply be a dour mustachioed villain, but thanks to Carrey, Robotnik’s absurd mustache becomes an amusing sight gag. His exaggerated performance doesn’t exactly solve the problems inherent in "Sonic 2," but it serves as a decent reminder of what a comedy star who operates on his own wild wavelength looks and sounds like. 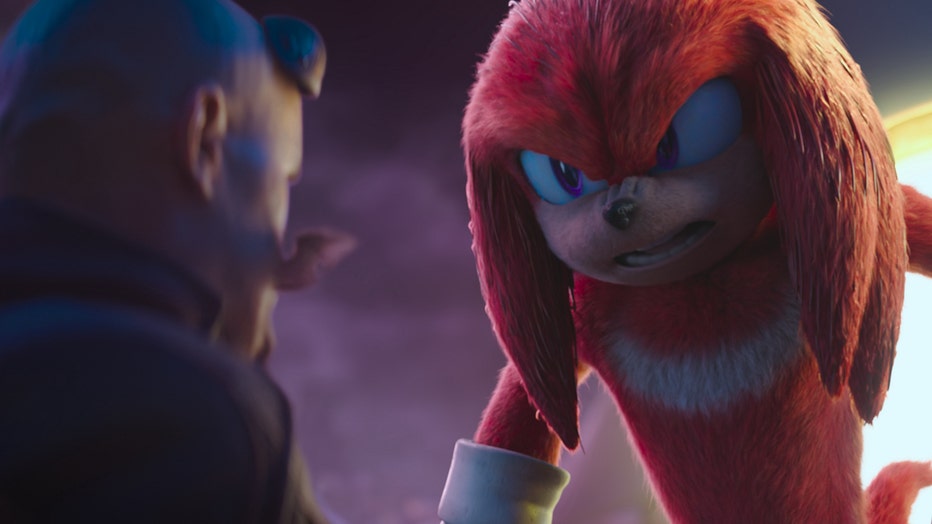 Fans of the "Sonic" franchise will likely delight in seeing references to the game’s lore (such as the Chaos Emeralds) and a spirited final battle that convincingly looks like the last level of a "Sonic" game. However, those who are not sated by video game allusions will be left to ponder or raise eyebrows at many of the film’s odd choices: grating product placement shoutouts to the Four Seasons, Uber, Olive Garden and Chevy; dialogue peppered with dated pop culture nods to, for example, Limp Bizkit; the list goes on.

These moments stick out like a sore thumb because "Sonic 2" rarely bothers to engage on a minute-by-minute basis, almost as if it’s counting on the audience to take a few bathroom breaks. Sometimes bigger is better, but with "Sonic 2," bigger means it’s just more boring.

About the writer: Vikram Murthi is a freelance film and TV critic. His work has appeared in The Nation, The A.V. Club and Filmmaker Magazine, among other outlets. 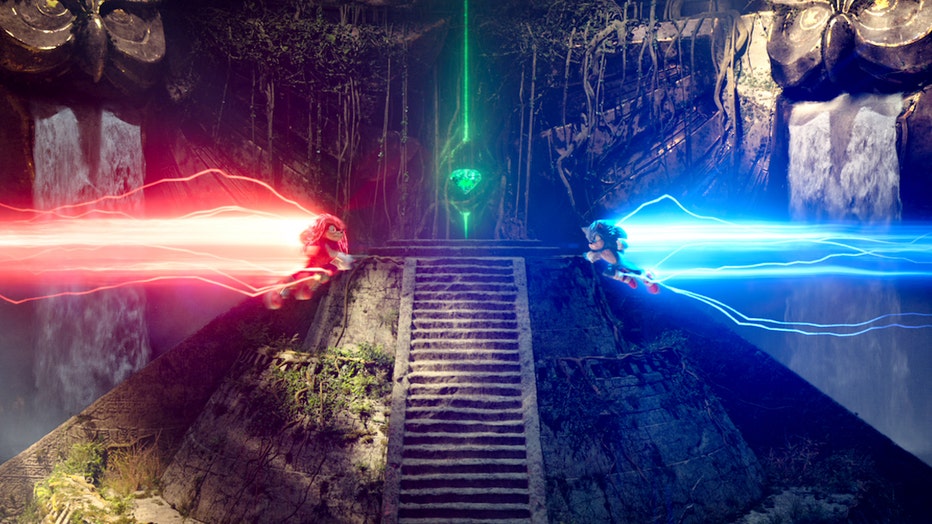 Knuckles (Idris Elba) and Sonic (Ben Schwartz) in Sonic The Hedgehog 2 from Paramount Pictures and Sega.

"Tales of a Fifth Grade Robin Hood" is streaming for free on Tubi.