Democratic Sen. Kyrsten Sinema of Arizona announced Friday that she has registered as an independent, but she does not plan to caucus with Republicans, ensuring Democrats will retain their narrow majority in the Senate.

WASHINGTON - Arizona Sen. Kyrsten Sinema’s switch from Democrat to independent won’t change the balance of power in the Senate. But it could affect her political fortunes back home.

Sinema says she won’t caucus with Senate Republicans, so Democrats will still hold the majority next year. And she is expected to continue casting most of her votes with Democrats while separating herself on certain issues.

"Nothing’s going to change for me," Sinema declared in a video announcing her decision.

A look at what Sinema’s decision means:

What it means for the Senate

Not much. Democrats will still be in charge, and day to day operations won’t change for Majority Leader Chuck Schumer. Sinema is still holding her Democratic committee assignments, meaning she can’t upend the party structure too much.

"We will maintain our new majority on committees, exercise our subpoena power and be able to clear nominees without discharge votes," Schumer said in a statement on Sinema’s decision.

What it means for the Democratic agenda

Again, it’s unlikely that Sinema’s move will change the party’s path forward, especially now that Republicans will be in the House majority, and little legislation will move through Congress.

Sinema has always voted in an independent manner – championing some party priorities such as same-sex marriage, which she was instrumental in negotiating before Senate passage last week, and opposing others such as a minimum wage increase. She and Sen. Joe Manchin, D-W.V., helped water down much of President Joe Biden’s social spending agenda in the first two years of his presidency.

She has generally voted for Biden’s executive and judicial nominations, as well.

What it means for Sinema

What it means for Sinema in Arizona is a trickier question.

Democrats are likely to put up a new candidate and put her in a three-way race for reelection in 2024, if she decides to run again. Voters will decide if they like her independent style, modeled after the late Sen. John McCain, or if they would prefer a partisan on the right or left.

"My approach is rare in Washington, and has upset partisans in both parties," she said. 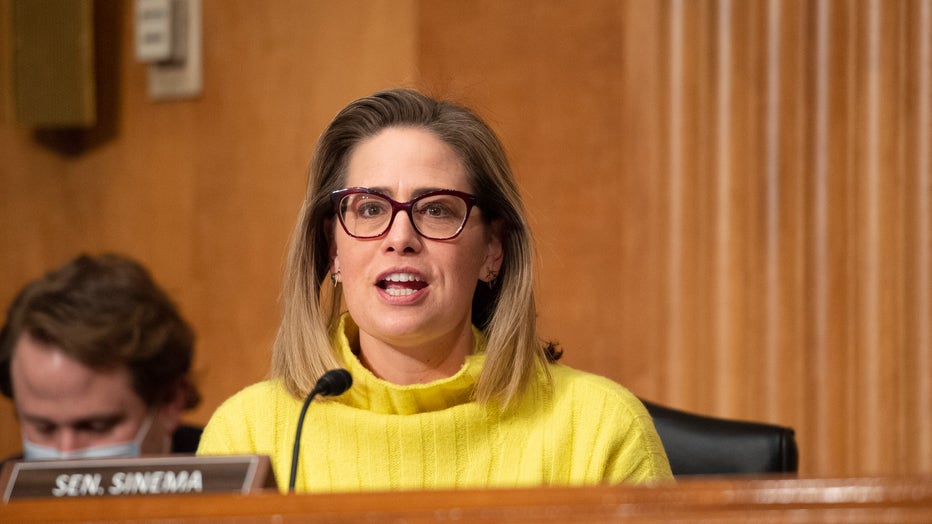 WASHINGTON, DC - FEBRUARY 01: Sen. Krysten Sinema (D-AZ) speaks during a Senate Homeland Security and Governmental Affairs Committee hearing to examine the nominations of Shalanda D. Young to be Director and Nani Coloretti to be Deputy Director of th (Photo by Bonnie Cash-Pool/Getty Images)