BUFFALO, N.Y. - Blizzard conditions driven by lake-effect snow continued in western New York on Christmas, where officials are calling this the worst winter storm in decades.

Several feet of snow effectively buried roads and homes in Erie County, including Watertown, Hamburg and Buffalo, New York. In a tweet Sunday, officials said the Buffalo Airport will be closed until Tuesday because of high winds, snow drifts and low visibility that have made air traffic unsafe.

During a news conference on Christmas morning, Erie County Executive Mark Poloncarz called the snowstorm "a major disaster" comparable to the blizzard of 1977 and worse than the historic blizzard in November.

"We have surpassed the scale of that storm," Governor Kathy Hochul said Sunday evening about the blizzard of 1977. "We now have what'll be talked about for generations as the ‘Blizzard of '22.’"

More deaths from the blizzard were confirmed on Christmas, bringing the death toll to at least 12 people in western New York throughout the winter storm, according to Gov. Hochul Sunday evening. Some victims were found in vehicles, while others were found frozen under other circumstances.

Gov. Hochul said Sunday evening that after speaking with the White House, her request for a disaster declaration would be granted.

Across the country, the Christmas week winter storm is being blamed for at least 26 deaths due to weather-related crashes and exposure.

After 48 hours of snowfall with rates up to 3 inches per hour, a driving ban continues for Erie County on Sunday. Sheriff's deputies have conducted more than 50 rescues throughout the storm using snowmobiles and special operations.

County officials said whiteout conditions were so bad ambulances had to be abandoned during an hours long period when emergency personnel could not respond to calls because conditions were too dangerous.

Poloncarz said in a tweet Sunday that this is the first time the Buffalo Fire Department could not respond to calls.

"These are communities that usually work very hard to make sure there is not even a snowflake on the road," the county executive said.

"This is a snowstorm that will never be forgotten," Poloncarz said.

Thousands without power on Christmas

Over 26,000 in Erie County are without power on Christmas morning, with more than 20,000 out in Buffalo.

Two county warming centers had to close because they lost power during the storm.

Snow and ice are causing power outages across Western New York, where substations in Buffalo are snowed in and frozen, according to Poloncarz.

Officials said that equipment is being brought in to get the substations back up and running, but it's possible some areas will not have power restored until Monday morning.

"I know this is not the news people want to hear on Christmas day," Poloncarz said.

Bands of heavy lake-effect snow with winds gusting to 35 mph continued to move into parts of Jefferson, southern Erie, Lewis and Chautauqua throughout Sunday morning.

More than 2-4 feet of additional snow is likely across western New York. Some locations near Lake Erie in New York have already received between 5-6 feet of snow throughout the Christmas week bomb cyclone. 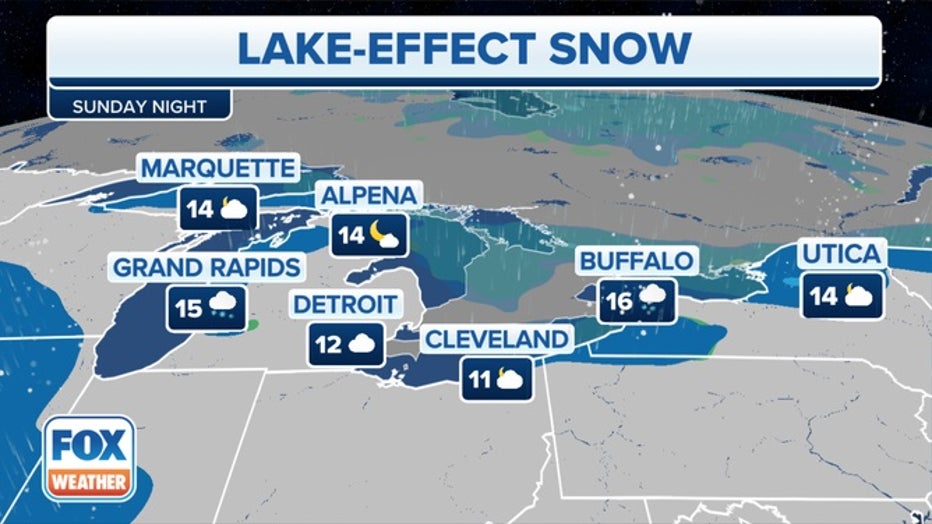 Orchard Park, New York, has picked up more than 6.5 feet throughout the weather event, and Hamburg has received nearly 6 feet.

The Buffalo International Airport recorded just over 2 feet of snow in 48 hours.

"Here's a view of our office with some rather impressive snow mounds in the foreground," the NWS Buffalo tweeted. "Many (many) cars are still buried throughout the area."

LINK: Get updates and more on the winter storm at foxweather.com.