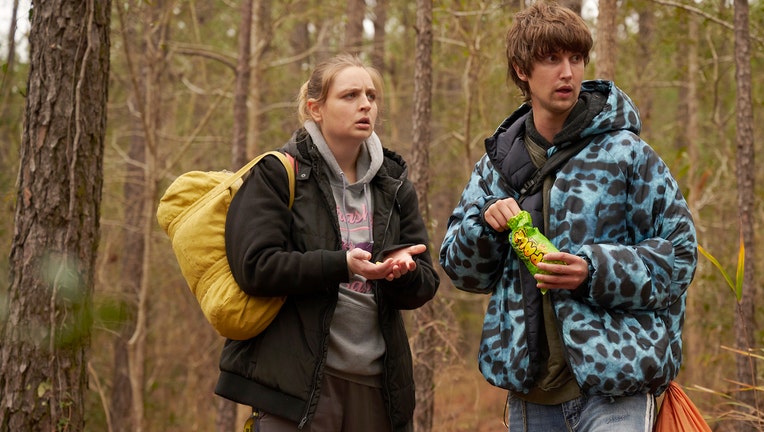 Chicago - Welcome back to "Welcome to Flatch" recaps! In the first of tonight’s two episodes, "No Credit/Bad Credit," Shrub thrives at his new job and Kelly gets a starring role in the car lot’s commercial, while Father Joe begins to miss having them around. Then in "Ghosted," Kelly and Shrub get lost in the woods on her birthday, while Cheryl, Mandy, Nadine and Father Joe decide to host a séance. Just starting the show? Here’s our recap of the premiere. Ready to binge? The first 12 episodes are streaming on Hulu.

It’s the second to last week of "Welcome to Flatch" — which has recently been renewed for a second season — and that makes this the perfect time to offer a round of applause for the show’s cast. So much of the series’ unique comedic voice comes directly from their performances. And this week’s pair of episodes offers a welcome showcase for just about everyone. So let’s dive into the goofy antics of "No Credit/Bad Credit" followed by the spooky fun of "Ghosted." 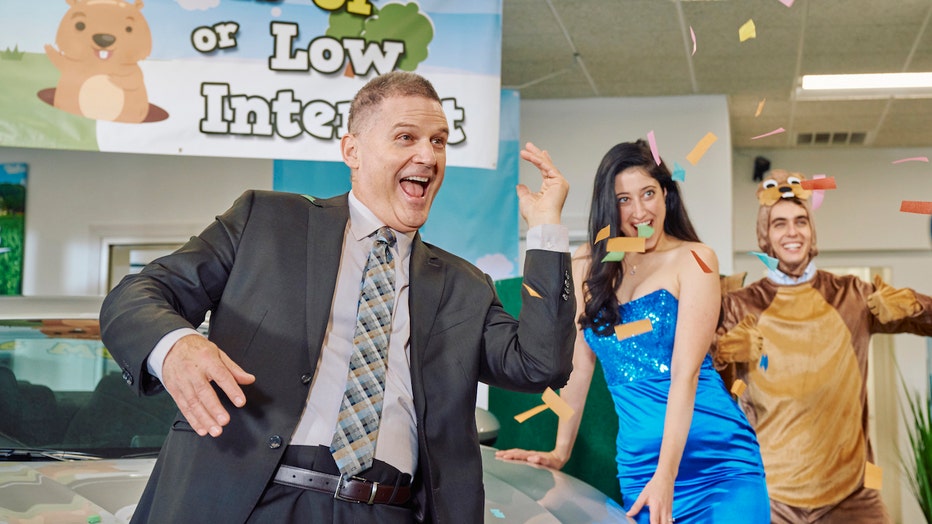 The main storyline of "No Credit/Bad Credit" takes place at the Parney family car dealership, where Shrub (Sam Straley) is still thriving in his new job as an auto detailer. He’s even gotten his cousin Kelly (Holmes) a job driving cars into the shop. (It only pays in donuts, but still.) That sweet deal gets even sweeter when it turns out the car lot’s annual "no credit/bad credit" sales event is coming up. And that means one thing: It’s time for the dealership to film one of its signature over-the-top local car commercials!

Kelly describes the local ads as being simultaneously "epically chaotic," "terrible" and "amazing," while Shrub chimes in that they’re "deranged and perfect." And the Mallet cousins are determined to be part of this year’s shoot in any way they can. 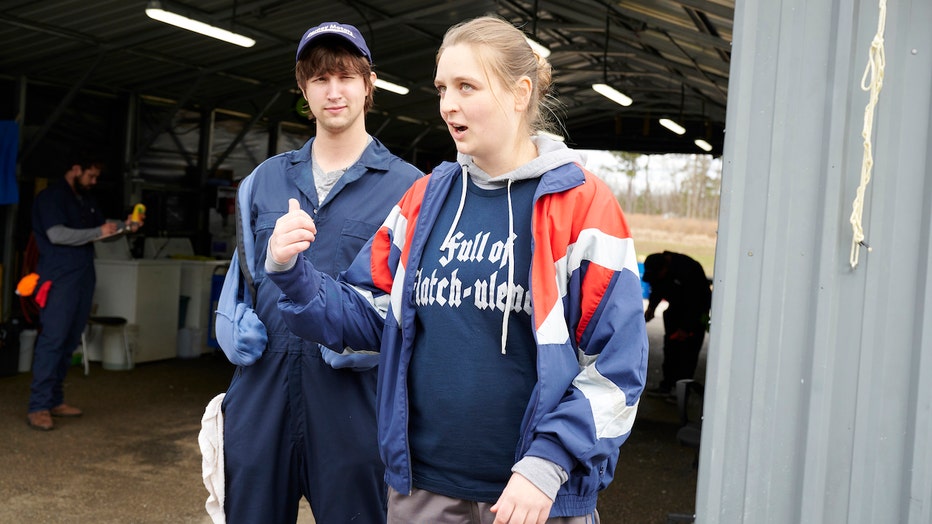 For his part, Shrub is honored to recive the assignment to detail and decal the car that’s going to be featured in the ad. Kelly, meanwhile, talks her way into being an extra and eventually winds up taking over the lead role from her rival Nadine (Taylor Ortega). But when it turns out that dealership owner Doug Parney (D.W. Moffett) only bumped up her role because he thinks the Mallet family are the perfect representation of desperate, destitute, irresponsible customers, Kelly and Shrub both quit on principle. ("Mallets out!") 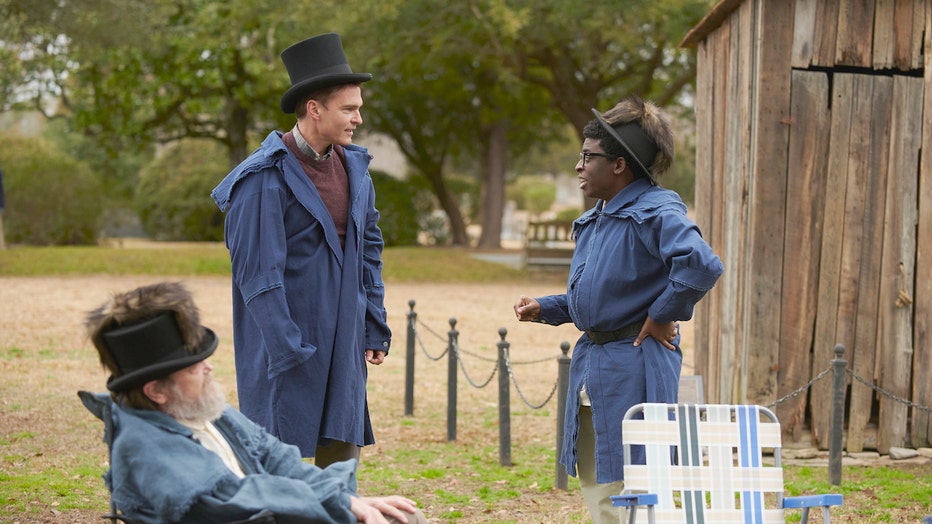 Elsewhere, "No Credit/Bad Credit" delivers subplots for both Cheryl (Aya Cash) and Father Joe (Seann William Scott). Joe’s thread is the lighter of the two, as he finds himself a little bored and lonely without Shrub and Kelly around to pester him. So he decides to invite himself along as Mickey (Justin Linville) leads a troupe of Flatch historical war reenactors. Only it turns out the story of the "Flatch Five" is pretty boring and lonely too, especially once Joe is fired from the group. All things considered, it’s a pretty inconsequential detour for the episode, but it does offer Scott a chance to show off his considerable physical comedy skills as he tries to adopt the limp and lost eye of historical hemophiliac Horace Mathison.

Cheryl’s story, meanwhile, is much more substantial. When she and her kind-of boyfriend Jimmy (Desmin Borges) are nominated in the same category at the Regional Ohio Journalist Awards, they decide to road trip to Cleveland together. But the competitive spirit that normally spices up their relationship takes a darker turn when Cheryl wins the award and Jimmy proves to be a bad sport about the whole thing. 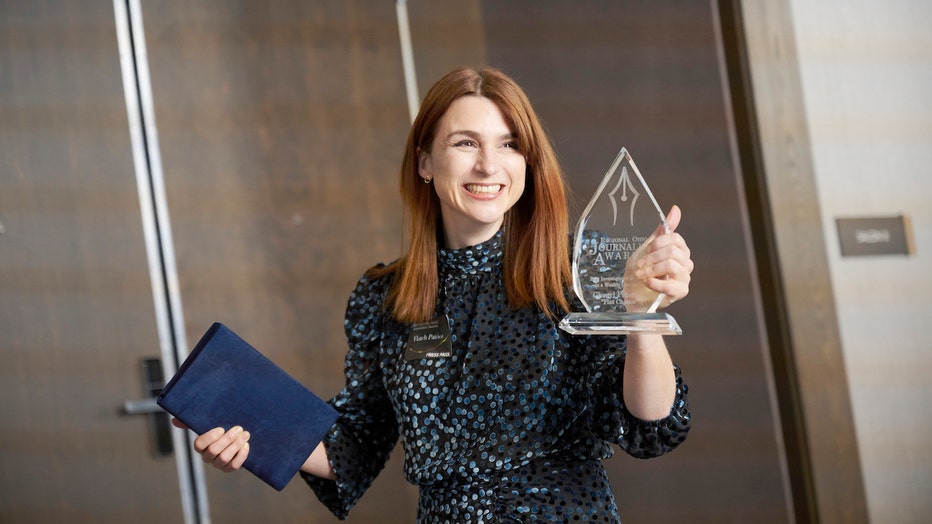 It’s enough to cause the two of them to break up after a hotel room screaming match. But the real highlight of this storyline is how it allows Cash to play up the goofy, exuberant (okay, tipsy) side of Cheryl. And while she may lose a boyfriend, Cheryl does gain a job offer from the prestigious "Dayton Sentinel." (They have a Chipotle in their complex!)

Those events feed directly into "Ghosted," which could easily double as a "Welcome to Flatch" Halloween special. When the lights mysteriously start flickering in Cheryl’s office, Nadine informs her it’s just the ghost of Franny — the last woman to run the "Flatch Patriot." In 1887, Franny uprooted her life and moved to Flatch to be with a man, only to eventually die alone with no friends or family, just the paper. That spookily familiar tale inspires Cheryl to reconsider what she wants for her own professional and personal life. And that means it’s time for a séance! 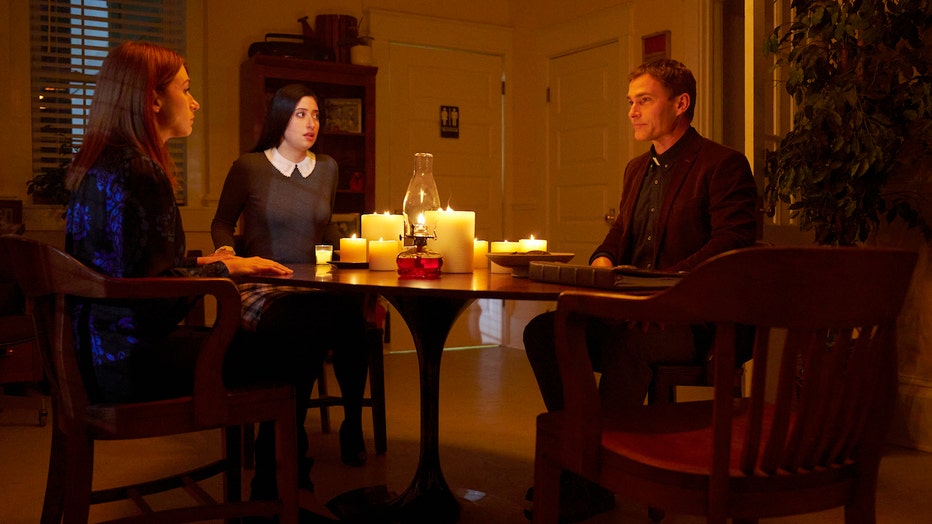 With some help from Mandy (Krystal Smith) — who moonlights as a medium — Cheryl, Joe and Nadine try to communicate with Franny's ghost to learn more about her life. And while the results are inconclusive (the mysterious banging they hear is just a maintenance man, for instance), the delightfully unusual evening helps Cheryl realize that she does want to stay in Flatch after all — something Joe is excited to hear, especially once he learns that Cheryl and Jimmy broke up.

(Oh and it turns out Franny was only single because she was a "black widow" who poisoned her three husbands. Let’s hope Cheryl doesn’t follow that particular path.)

Elsewhere, it’s Kelly’s birthday and her highly anticipated annual trip to a major department store sale goes awry when Shrub suggests a shortcut through the woods. Instead of camping in a parking lot with fellow bargain hunters, the duo wind up sleeping out in the woods after they get lost. And "Welcome to Flatch" goes full "Blair Witch Project" as the cousins get separated from the documentary crew and have to film themselves on their phones — all while trying to avoid "The Melon-head Twins." (Local legend says that the violent siblings survived a freak experiment at a local orphanage that caused their heads to grow to be the size of watermelons.) 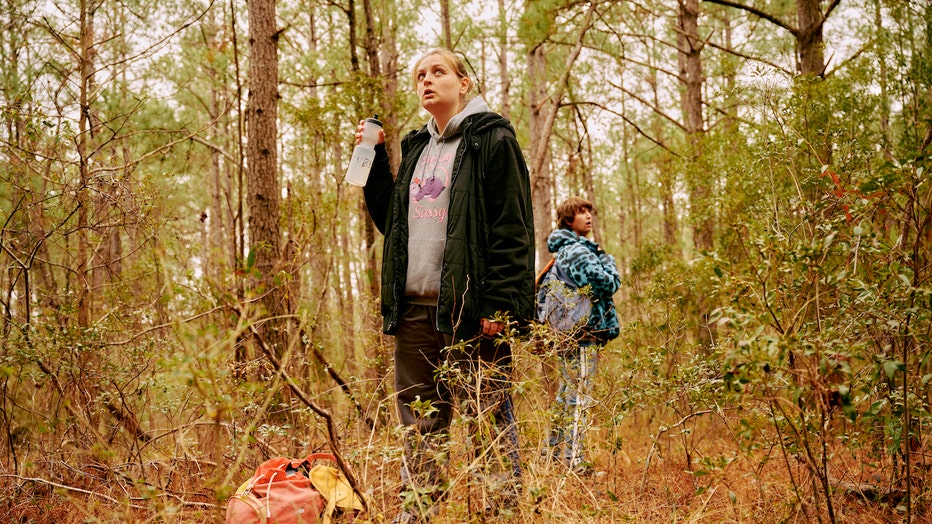 It’s some goofy, spooky fun that also connects to the most bittersweet element of "Welcome to Flatch": Kelly’s relationship with her dad. He’s the one who usually goes bargain hunting with her, but now that he’s not around as much, Shrub feels responsible for stepping up and taking care of his cousin. After Kelly and Shrub eventually make their way back to civilization, the episode even ends with Shrub delivering a gift he pretends is from Kelly’s dad. Turns out the two Mallet cousins really do have each other’s backs.

"Welcome to Flatch" airs Thursdays on FOX. The first 12 episodes are also currently available to stream on Hulu. Recaps run weekly, and you can read them all below.

The Freak Brothers (2021): Smoke 'em if you got 'em! Pete Davidson, Woody Harrelson and John Goodman lead the voice cast of this adult animated stoner comedy based on Gilbert Shelton’s cult classic comic, "The Fabulous Furry Freak Brothers." The series follows three 1960s hippie stoners who smoke a magical strain of weed, only to fall into a 50-year slumber and wake up in the 2020s. While time (and weed culture) may have changed, the Freak Brothers are just as mellow as ever. "The Freak Brothers" is a Tubi Original. Rated TV-MA. One season, 8 episodes. Also featuring the voices of Tiffany Haddish, La La Anthony, Adam Devine.

Staged (2020): We wouldn’t go so far as to call this David Tennant/Michael Sheen meta-comedy the only good "pandemic show," but it’s certainly one of the best — if only because it accurately captures the surreality of those early months better than any well-meaning drama ever could. Tennant and Sheen play fictionalized versions of themselves who are trying to rehearse a play over Zoom during lockdown. Prepare for a delightful parade of deadpan guest stars (Samuel L. Jackson! Dame Judi Dench!) and Tennant’s many headbands. So many headbands. Rated TV-MA. Two seasons streaming on Tubi. Also featuring Georgia Tennant, Anna Lundberg.

The Nanny (1993): She was working in a bridal shop in Flushing, Queens when her boyfriend kicked her out in one of those crushing scenes. What was she to do? Where was she to go? She was out on her fanny. So over the bridge from Flushing to the Sheffield’s door. She was there to sell makeup, but the father saw more. She had style! She had flair! She was there! That’s how she — she being Fran Drescher’s distinctively-voiced, iconically-costumed protagonist — became one of the most unlikely and beloved sitcom stars of the 1990s. Rated TV-PG. Two seasons streaming on Tubi. Also featuring Charles Shaughnessy, Daniel Davis, Nicholle Tom.