A deer crashed into a Long Island salon.

LAKE RONKONKOMA, N.Y. - A deer crashed through the window of a Long Island hair salon Saturday, landed on a customer, and then ran amok before breaking out the front door with a straightening iron in tow.

The buck's surprise visit to the Be.you.tiful salon in Lake Ronkonkoma was captured by the salon's security camera.

Salon owner Jenisse Heredia said she was cutting a client's hair when she heard "this wild crash" and thought it was a car. "But when I looked I saw a deer coming at me," Heredia said Sunday.

Deer crashes into a beauty salon

Customers and staff were shocked when a deer crashed through the front window.

The buck ran to the break room at the back of the shop, came back out and hit a mirror, then ran out with an iron caught on its antlers, Heredia said.

When Uma Sedani’s car wouldn’t start, she went back inside the salon to wait for someone to pick her up. The 75-year-old had just finished getting a haircut.

The security video shows the deer jumping over her head and landing on her as she sits on a couch at the front of the shop.  The deer then fell to the floor in front of a styling station. 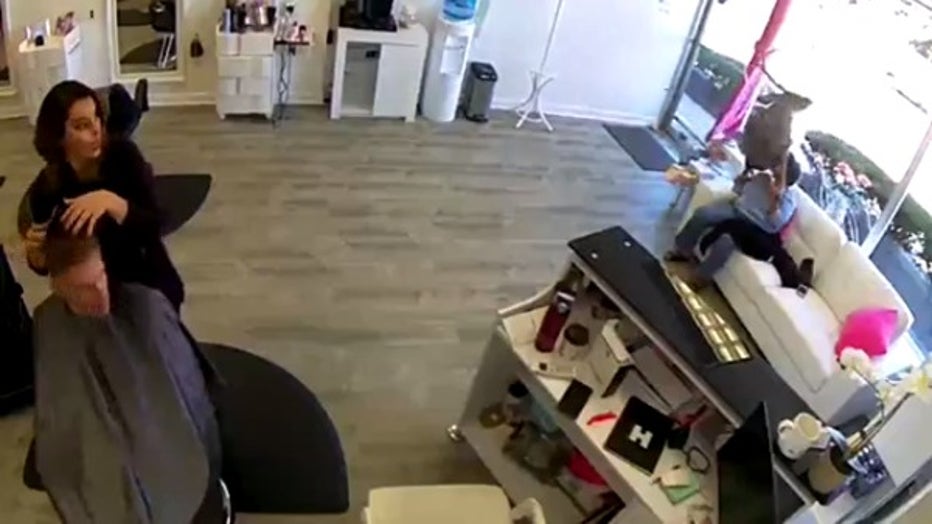 "'Oh my God,' I said. 'Where did he come and why did he come?' she said. "They’re all screaming, glass is falling down, everyone is running around. In five minutes he just left."

She suffered leg and head pain and was treated at a hospital.

On Monday she said she was still a little sore and still in shock.

Although the buck ran through the shop thrashing its antlers, it caused little damage other than to the front door and window, Heredia said. "It's crazy It didn't break anything," she said.

The salon, which is closed on Sundays, was open as usual on Monday.