Vivid Sydney returned to the city’s event calendar with a stunning display of illuminated landmarks and a record-breaking drone show on May 29, 2022. Credit: Kate Tan via Storyful

SYDNEY - Famous landmarks of Sydney are being illuminated this month as part of a creative festival that aims to celebrate artists, musicians and other visionaries across Australia’s largest city.

The festival, called Vivid Sydney, began Friday and runs through June 18, 2022. It took a two-year hiatus due to the COVID-19 pandemic but returned for its 12th year with more than 200 events to celebrate "the essence of Sydney’s soul including its diversity, beauty, resilience, First Nations culture, and vibrant creative community."

A timelapse video shows the lighting of the sails on the opera house. The projected artwork was created by Sydney-based creative technologists Curiious, who sought to bring to life a colorful painting known as "Yarrkalpa – Hunting Ground, Parnngurr Area, 2013" in a celebration of the Martu people and other Australian aboriginal art histories.

The Sydney Opera House lights up in a timelapse video during Vivid Sydney on May 29, 2022, in Syndey, Australia. (Credit: Kate Tan via Storyful)

"The Sydney Opera House is the perfect canvas on which to share the Martu’s stories with Sydneysiders and visitors, and an ideal moment in time to offer a new perspective into ancestral practices and knowledge of Country," a description of the event and collaboration reads.

The timelapse video shows several other light projections on buildings and landmarks of Sydney, which is the capital of New South Wales. 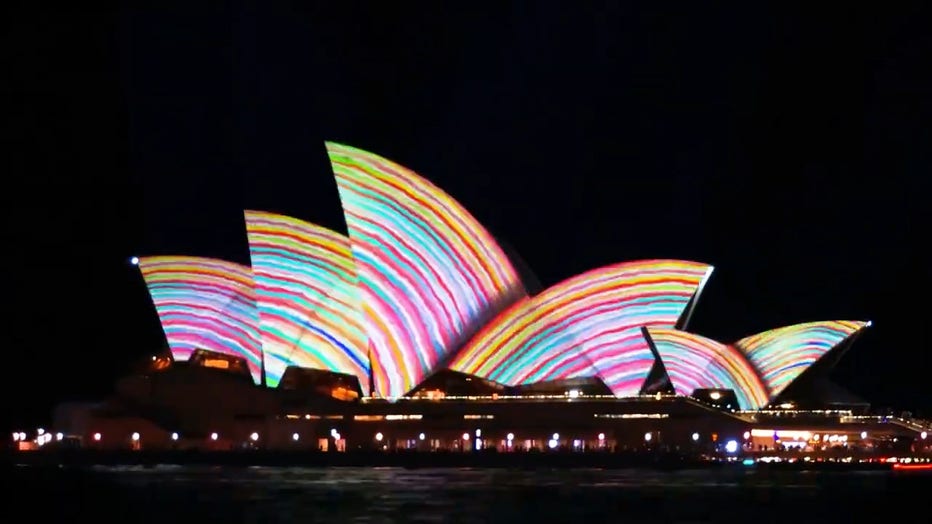 The Sydney Opera House is pictured illuminated during the 2022 Vivid Sydney event on May 29, 2022, in Syndey, Australia. (Credit: Kate Tan via Storyful)

"Vivid Sydney tells a story of the harbour city beyond the icons, about urban legends, secret spaces and visions for the future," the organizers said of the event. "This year, the festival boasts the longest continuous Light Walk in the history of the event, from Sydney Opera House to Central Station."

Visitors who travel to the city get to experience the lights each evening between 6 p.m. and 11 p.m. local time.