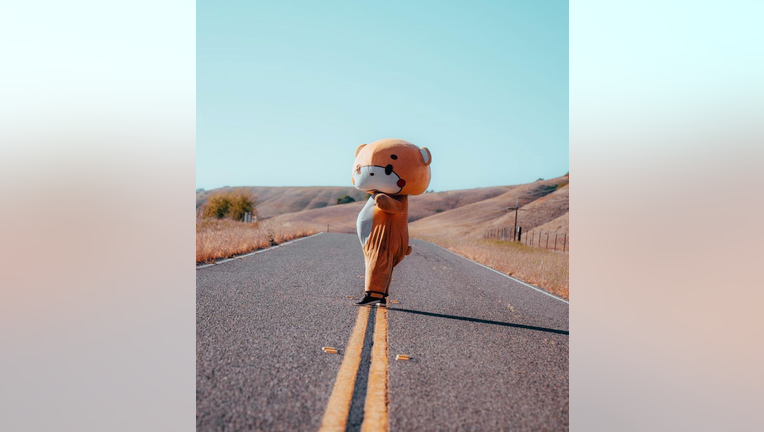 A photo of 'Bearsun' standing in the middle of a California highway. (@Bearsun Twitter)

SAN FRANCISCO - A giant teddy bear who sounds like a surfer dude - and who has since gone viral - finally reached his intended goal: The City of San Francisco.

"Bearsun," aka Jessy Larios, 33, reached Dolores Park sometime Saturday morning, according to his Instagram post of his trek from Los Angeles, which he began two weeks ago. He just has a little ways to go before he reaches the very end of his route: the Golden Gate Bridge.

Despite the long walk, he was gracious enough to give a woman a hug when he arrived at Mission Street.

Larios started his journey in Los Angeles on April 12 and had intended to reach San Francisco by April 17, but reached his destination a little later.

Why make the 400-mile journey on foot? In a bear suit?

Larios told Reuters he's not exactly what inspired him to dress up as the character and take off on a West Coast walking tour.

"It was an impulsive decision for sure. I didn't plan it out," he told Reuters.

Larios has been making stops along the way to sleep and eat, but not much else. He visits gas stations for meals and to clean up, and just sleeps inside the suit wherever he finds himself at the end of the day, Reuters reported. He posts regularly on Instagram to keep his new fans up to date on his trip.

Larios has been asking for, and receiving, donations as he makes his way through the Golden State, which he said he would donate to an unnamed charity.

On his GoFundMe, he asked for suggestions of where to give the funds.

By Saturday afternoon, he had surpassed his goal of $10,000.