Wedding photographer Mahmoud Nakib captured the video on Aug. 4, 2020 as a violent explosion ripped across the city. (Credit: Mahmoud Nakib via Storyful)

BEIRUT - Video meant to show a stunning bride on her wedding day in the Lebanese capital of Beirut inadvertently captured the moment when a massive explosion ripped through the city on Tuesday, killing more than 100 people and injuring thousands.

The footage, shot by wedding photographer Mahmoud Nakib, starts with the bride standing in her all-white gown while posing in a town square.

As the camera pans down to the bouquet, a violent explosion rips through the city — sending everyone in the shot scrambling to safety. 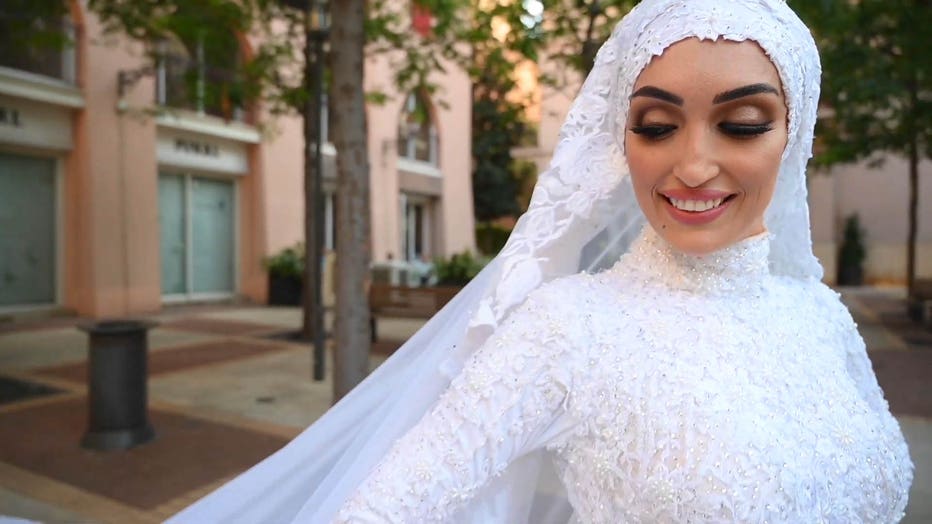 The video shows windows shattered, debris littering the street and the air filled with dust after a shockwave from the explosion moved from Beirut’s waterfront to the city’s residential areas and shopping districts.

The bride and groom were unharmed in the blast, according to Storyful. Nakib said they took refuge at a nearby house. He also livestreamed video of the scene on Facebook.

The blast occurred at Beirut’s port, killing at least 135 people and wounding about 5,000, according to Wednesday reports. A preliminary investigation indicated it was caused by a large stockpile of ammonium nitrate, a highly explosive chemical used in fertilizers. Officials were combing the wreckage on Wednesday amid speculation that negligence was to blame.

Following the explosion, hospitals were overwhelmed with patients and buildings were leveled around the city. Beirut’s governor said hundreds of thousands might not be able to return to their homes for two or three months.

Tuesday’s blast was the worst single explosion to strike Lebanon in the country’s history. Lebanon has been frequently marred by destruction, including a 1975-1990 civil war, conflicts with Israel and periodic terror attacks.