Boxing bunnies caught on camera duking it out

SWAFFHAM, United Kingdom - Photographer Paula Cooper captured a brawl between two rabbits on her way home from work on April 2.

Cooper told Storyful she pulled over to watch a group of brown hares roaming about a local field when two of them began duking it out right in front of her.

According to Woodland Trust, a conservation charity in the U.K., this is common behavior in the springtime.

"Brown hares are famous for their energetic behaviour, and during the month of March in particular they are known to ‘box’ frantically with one another," Woodland Trust explained. "These 'mad March hares' do this because they are in their mating season, with the males (bucks) seeking out any females (does) that have come into season. 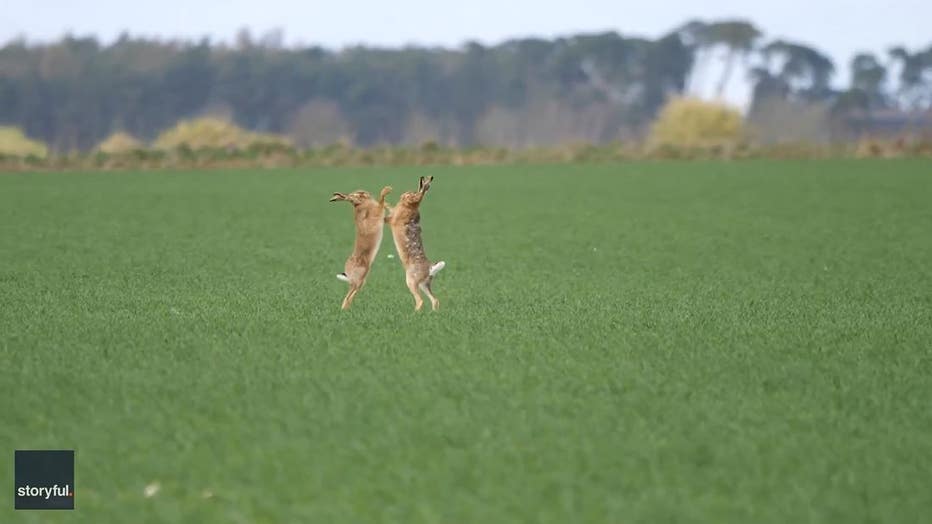 Woodland Trust said skirmishes usually break out when a male hare is being too persistent with a female — chasing her across fields in an attempt to mate. (Source: Paula Cooper)

Woodland Trust said skirmishes usually break out when a male hare is being too persistent with a female — chasing her across fields in an attempt to mate.

"When she’s had enough, she’ll turn around and try to fend him off in a fierce boxing match," Woodland Trust said.

After the fisticuffs, Cooper said the hares began eating together — with the female giving the male "an odd glare."