Rescue on the sea

A girl was on a small child-sized inflatable raft that got loose from its safety line and floated out to sea off the coast of Wales in the U.K. (Video courtesy of Royal National Lifeboat Institution)

A fast-acting lifesaving crew rescued a terrified girl who was on an inflatable dinghy that had blown out to sea off the coast of the United Kingdom on Monday.

Video from the rescue crew's helmet cameras shows them speeding toward the girl in the dinghy, which had floated away from a beach in Rhyl, a seaside resort community in Wales.

"The child was a few hundred metres out at sea, but luckily had stayed on the inflatable," the Royal National Lifeboat Institution, or RNLI, said in a news release. "The child's family had kept a safety line to the shore, but it became detached from the shore and the dinghy drifted out."

The video shows the lifeboat pulling up alongside the wayward dinghy. The girl can be heard crying, "Please help me!" The crew members lift her and the inflatable into the lifeboat and then speed back to the beach, the video shows.

The offshore wind and high tides carry inflatable "toys, boats, and balls out to sea with regularity," according to the RNLI.

The RNLI is a nonprofit volunteer organization providing search-and-rescue services along the coastlines of the United Kingdom and the Republic of Ireland. The group operates more than 238 lifeboat stations and more than 240 lifeguard units. 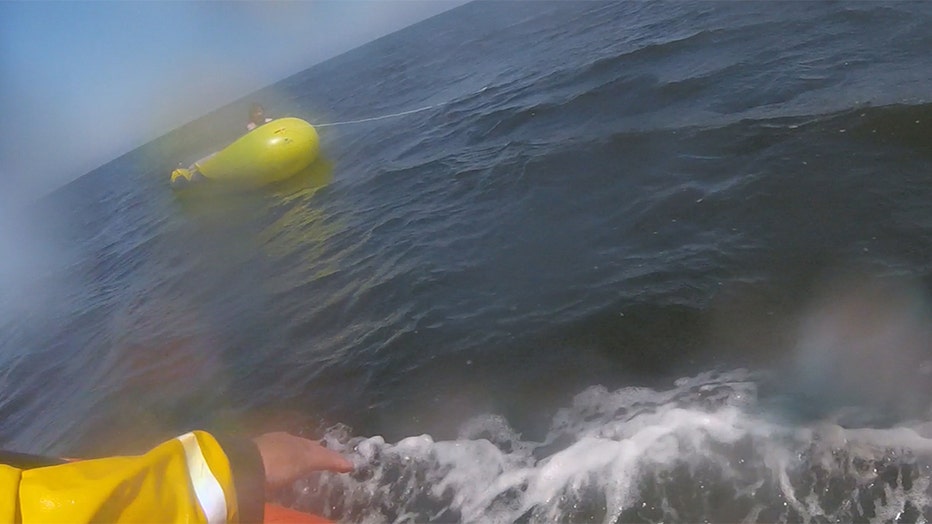 A lifesaving crew rescued a girl whose inflatable dinghy had blown out to sea off the coast of Wales, U.K., Monday, May 31, 2021. (Courtesy of Royal National Lifeboat Institution)