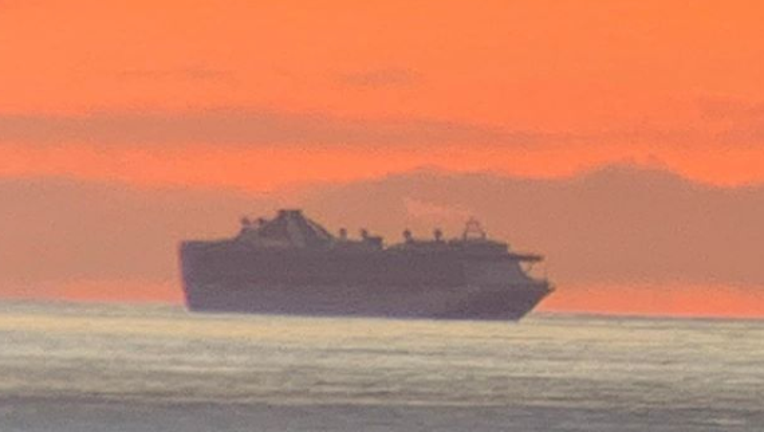 Grand Princess off the shore of San Francisco. March 7, 2020

WASHINGTON, D.C. - The U.S. State Department now says that it recommends that American citizens should not travel on cruise ships because of the risk of coronavirus.

"U.S. citizens, particularly travelers with underlying health conditions, should not travel by cruise ship," the government said on the website travel.state.gov.

The recommendation comes after about 700 passengers on the "Diamond Princess" cruise ship quarantined off Yokohama, Japan became sick, and six died, Doctors said it essentially became a floating germ factory.

On Sunday, plans were being worked out to allow the "Grand Princess" cruise ship to dock at Oakland, Calif., with at least 21 people (including 19 crew members) confirmed sick with coronavirus. Passengers were be slowly removed in a process that could take several days. The ship is carrying 3,500 people from 54 countries.

Grant Tarling, chief medical officer for Carnival Corporation, said it's believed a 71-year-old Northern California man who later died of the virus was probably sick when he boarded the Grand Princess for a Feb. 11 cruise to Mexico.

As of Sunday afternoon, the "Regal Princess" cruise ship was being held off the coast of Florida awaiting test results on whether two crew members who transferred there from the Grand Princess have contracted the new coronavirus. It was supposed to dock in Port Everglades but has been sailing up and down the coast. The Coast Guard delivered testing kits to the Regal Princess Sunday morning.

This story was reported from Chicago. The Associated Press contributed to this report.