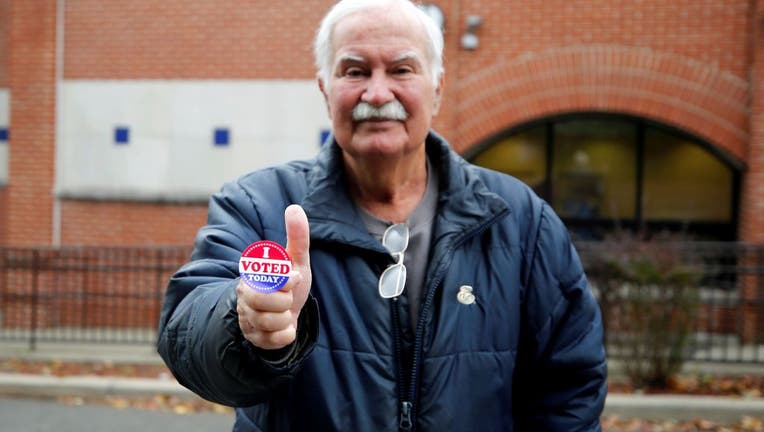 NEW JERSEY, USA - NOVEMBER 05: A voter reacts as he wears a sticker after casting his vote at a polling station during the election day in New Jersey, United State on November 05, 2019. In the United States, Election Day is the day set by law for the

TRENTON, N.J. (AP) — Republicans picked up at least two Assembly seats, as well as the Democratic-held Senate seat that opened after Jeff Van Drew went to Congress, according to unofficial results reported by New Jersey's Division of Elections.

The Associated Press was unable to call a handful of Assembly contests, as well as the only state Senate race on the ballot, in Tuesday's election because of outstanding mail-in votes.

But the state's unofficial results indicate that Republicans fended off big-spending Democrats in districts they targeted, including Republican Assembly Leader Jon Bramnick's contest.

The figures also show net gains for the GOP, though Democrats would remain firmly in control.

If the results hold, Republicans will pick up at least two seats in the Assembly, lowering the Democrats' majority from 54 seats to 52 and boosting Republicans to 28 from 26. One race that was too close to call also currently favors Republicans and could lead to another two-seat pickup.

In the Senate, Republicans look to have picked up the lone seat on the ballot, lowering the Democratic advantage from 26 seats to 25 and increasing GOP numbers from 14 to 15.

Each Assembly district has two representatives, and Democrats and Republicans typically run together on a ticket.

The contest was the first statewide legislative race since Democratic Gov. Phil Murphy took office in 2018.

Murphy on Wednesday hailed the elections as a success despite the likelihood of his party losing seats. He pointed to down-ballot pickups, particularly in traditionally Republican Somerset County and attributed the failure to defeat Bramnick to his being an incumbent in a long-held GOP district.

"(The Democratic candidates) were highly competitive and came close to winning in a district against incumbents, including minority leader in a district that is an away game for us," Murphy said at a news conference Wednesday.

But Republicans were almost gleeful at their apparent victories, which came in the face of an advantage of nearly 1 million registered voters for Democrats and an onslaught of campaign spending. State figures from before the election showed Democrats spent more than 3.5 times as much as Republicans.

Declaring victory Tuesday night, Bramnick chalked up the result to his moderate stance and opposition to Murphy's calls for higher taxes.

"A moderate Republican actually won, and I'm proud of that," said Bramnick, who has been the leader since 2012, when Democrats controlled 48 seats to Republicans' 32.