NYPD Detective Dalsh Veve received a hero's welcome and a heartfelt thank you from the Tunnel to Towers Foundation days before Thanksgiving.

BALDWIN, N.Y. - NYPD Detective Dalsh Veve received a hero's welcome and a heartfelt thank you from the Tunnel to Towers Foundation days before Thanksgiving.

In 2020, the Tunnel to Towers paid off the mortgage on his home in Baldwin. On Tuesday, the foundation unveiled new upgrades including a two-car garage outfitted with a physical therapy room and an ADA-compliant bathroom to make his life a little easier.

"It gives him back great independence," Tunnel to Towers Foundation CEO and Chairman Frank Siller.

It has been a rough road to recovery for Veve, who suffered a traumatic brain injury in 2017 after he was dragged several blocks by a teenage car thief in Brooklyn.

FOX 5 News was there when he left the rehabilitation center nearly a year later.

His wife Esther said she is humbled by the help and support.

"Never in a million years would I thought of something like this," she said. "It's one step closer to his full recovery."

Every day from Thanksgiving to New Year's, Tunnel to Towers plans to either pay off the mortgage or deliver a mortgage-free smart home to a Gold Star family or fallen first responder family or the family of a first responder who was catastrophically injured in the line of duty. 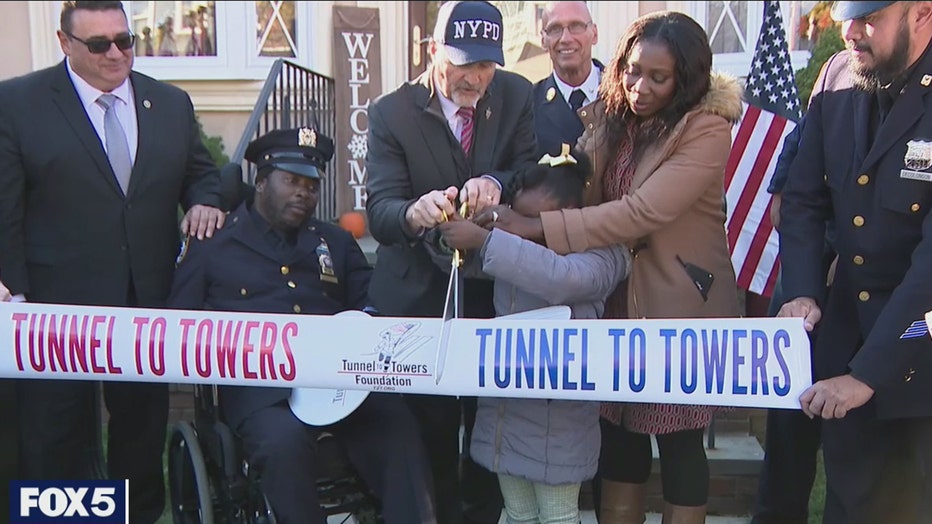 The Tunnel to Towers Foundation held a ribbon cutting with Detective Dalsh Veve and his wife, Esther, at their home in Baldwin, N.Y.

Siller founded Tunnel to Towers honor his brother Stephen Siller, who died while responding to the Sept. 11, 2001, terror attacks on the World Trade Center.

"This has my brother's soul and the souls of so many who perished on 9/11," he said.

A miniature replica of the World Trade Center made from twin towers steel will now be a centerpiece inside Esther's home as a symbol of her husband's sacrifice.

The project took months but the difference it will make in Veve's life will last a lifetime.