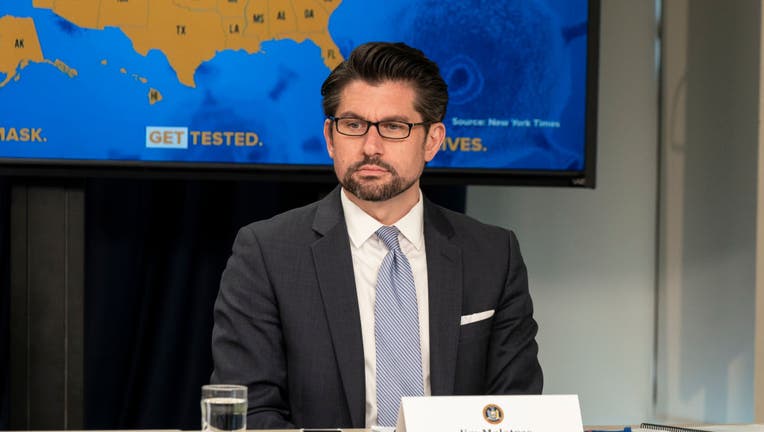 Leaders of New York's public college system are standing behind Chancellor James Malatras, who has faced calls to resign after the release of text messages showing he mocked one of the women who later accused former Gov. Andrew Cuomo of sexual harassment.

"He’s acknowledged he made a mistake, taken full responsibility for it, and apologized appropriately," the State University of New York Board of Trustees said in a statement Friday night, following a written apology from Malatras. "He is fully focused on the critical work of keeping our facilities open and our students and faculty safe through the ongoing pandemic."

Malatras, a former top adviser to Cuomo, came under fire after Attorney General Letitia James made public transcripts and evidence from a monthslong probe of sexual harassment allegations that forced Cuomo from office. Cuomo has denied harassing anyone.

A text exchange involving Malatras and other Cuomo allies showed them mocking Lindsey Boylan, a former economic development official who was the first woman to publicly accuse Cuomo. Boylan, after leaving the administration, tweeted in 2019 that working in politics had been "a toxic and demoralizing experience."

She had yet to go public with her sexual harassment allegations against the governor.

"Let's release some of her cray emails," Malatras texted, using slang for crazy.

After Boylan called him out in a series of tweets, Malatras texted to the group: "Malatras to Boylan: Go f__ yourself."

The SUNY Student Assembly on Friday called for the trustees to remove Malatras with a vote of no confidence.

"Allowing the chancellor to remain in place damages the reputation of the system, detracting from our education and devaluing the degrees we are all working towards," the group, which represents students in SUNY governance, said.

In a statement Friday, Malatras said he owed Boylan and the SUNY community an apology.

"Leadership in public service is a privilege and with it comes immense responsibility for upholding the values of professionalism, decency, and respect. I take that responsibility very seriously and in recent days it has been clear I have fallen short," he wrote, calling his remarks "inappropriate, disrespectful and wrong."

Boylan later tweeted that she had received no apology from Malatras.

"I’m glad he didn’t apologize because, based on his email, he continues to lie," she said.

The trustees' statement praised Malatras' leadership of the 64-campus system through the pandemic since his appointment in August 2020.

"We have challenging days ahead and believe Jim Malatras, as chancellor of the State University of New York, remains the right leader to help us meet that challenge," the statement said.