President Donald Trump said he would feel even more strongly to throw his name into the race for president in 2024 if Meghan Markle decides to run. (CREDIT: Fox News)

Former President Donald Trump said that he’d feel even more strongly about throwing his name into the 2024 presidential race if Meghan Markle decides to run.

"Well I hope that happens because if that happened then I’d be, I think I’d have an even stronger feeling toward running," Trump told "Fox News Primetime" host Maria Bartiromo. 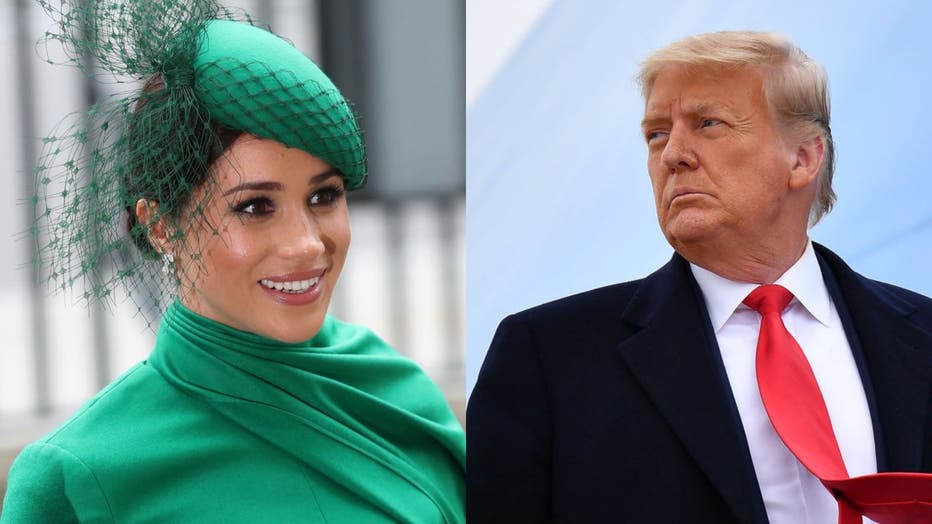 The Daily Mail cited an unnamed U.K. politician over the weekend who claimed that Markle was meeting with Democratic operatives to explore a potential bid for president in 2024. Markle has not confirmed the rumors herself.

And while there has been speculation that Trump could also be looking at a 2024 presidential run, he has only teased the idea, even going so far as to say "every poll" shows his supporters want him to run again.

"Well based on every poll, they want me to run again but we’re going to take a look and we’ll see. We have, first step’s first, we have to see what we can do with the House," Trump said on Wednesday.

Less than a month after excoriating Trump in a blistering floor speech, Senate Minority Leader Mitch McConnell said in February that he would "absolutely" support the candidate who secures the Republican nomination in 2024, but stopped short of directly saying that he would support Trump.

The Kentucky Republican told FOX News that there’s still "a lot to happen between now" and the next presidential election.

"I’ve got at least four members that I think are planning on running for president, plus governors and others," McConnell said. "There’s no incumbent. Should be a wide open race."

RELATED: Trump to claim he is ‘presumptive 2024 nominee,’ leader of GOP in CPAC speech: report

But when directly asked if he would support Trump again were he to win the nomination, McConnell responded: "The nominee of the party? Absolutely."

Following Markle and Prince Harry’s interview with Oprah earlier this month, Trump expressed that he believed Markle was "no good," according to Jason Miller, who was Trump’s senior communications adviser.

"She’s no good… I said it and now everybody is seeing it," Miller said, recounting the former president’s comments during an interview on a podcast.

During his 2020 presidential campaign, Trump expressed his distaste for Markle following a video she and Prince Harry released pleading with the American public to vote for President Joe Biden in September of 2020.

Markle stressed that the election was the most important in her lifetime.

"When we vote, our values are put into action and our voices are heard," Markle said.

"I’m not a fan of hers and I would say this, and she probably has heard that, but I wish a lot of luck to Harry. He’s going to need it," Trump said of the video.