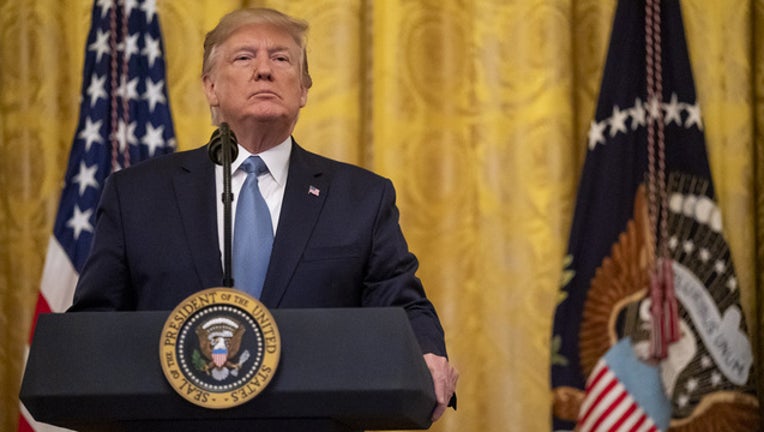 WASHINGTON - (AP) -- President Donald Trump is lashing out at social media companies and the press ahead of a "Social Media Summit" he's hosting at the White House that will bring together mostly conservative groups.

Trump's Twitter messages Thursday morning included jabs at "certain companies," the press and his Democratic rivals, whom he demeaned with schoolyard taunts. Trump predicted, without reason, the demise of the press and social media platforms if he loses to a Democrat in 2020 and hailed himself as "so great looking and smart, a true Stable Genius!"

The outburst came as Trump prepared for a conference that offers him a chance to play to his conservative base in the lead-up to the 2020 election. Trump has long complained, without evidence, that companies such as Google, Twitter and Facebook are "against me" and has threatened lawsuits to halt what he's claimed is their bias against conservatives.

Trump said in his tweets that a "big subject" of the summit would be "the tremendous dishonesty, bias, discrimination and suppression practiced by certain companies."

"We will not let them get away with it much longer," he said.

Trump has an estimated 61 million followers on Twitter and uses the platform on a near-daily basis to speak directly to his followers. He has a knack for tweeting outrageous, divisive or tongue-in-cheek missives that spur frenzied reactions from the mainstream press.

Trump, however, has accused Twitter, without evidence, of making it "very hard for people to join me" and "very much harder for me to get out the message." He has suggested the companies may be acting illegally and should be sued by U.S. regulators.

He and some supporters also have accused other Silicon Valley companies of being biased against them. Accusations commonly leveled against the platforms include anti-religious bias, a tilt against those opposed to abortion and censorship of conservative political views. But while some company executives may lean liberal, they have long asserted that their products are without political bias.

Trump frequently lashes out at the press and did so again Thursday, tweeting that, "Fake News is not as important, or as powerful, as Social Media." He went on to predict that outlets "will quickly go out of business" when he leaves office, even asserting that "Social Media would be driven out of business" if he loses in 2020 to one of his Democratic challengers.

Among the conservative organizations expected to participate in the White House meeting are Turning Point USA, a conservative nonprofit; PragerU, short for Prager University, which puts out short videos with a conservative perspective on politics and economics; and the Heritage Foundation, a Washington think tank.

Representatives for Facebook, Google and Twitter declined to comment specifically on Thursday's meeting. But the Internet Association, the industry's major trade group representing Facebook, Google and dozens of other companies, said the internet "offers the most open and accessible form of communication available today."

Its members' platforms "don't have a political ideology or political bias," the group's president and CEO, Michael Beckerman, said in a statement. He added that the companies "succeed and grow by building a broad user base regardless of party affiliation or political perspectives."

Twitter spokeswoman Katie Rosborough, in a statement, said Twitter enforces its "rules impartially for all users, regardless of their background or political affiliation."

"We are constantly working to improve our systems and will continue to be transparent in our efforts," the statement said.

Thursday's conference raised questions about whether Trump would use the forum to signal tough actions ahead by his administration against the big companies in the areas of competition and privacy.

Big tech companies already are under closer scrutiny than ever by regulators and in Congress following a stream of scandals including Facebook's lapses opening the personal data of millions of users to Trump's 2016 campaign. A bipartisan push for new data privacy legislation has emerged in Congress. Regulators at the Justice Department and the Federal Trade Commission are pursuing antitrust investigations of Facebook, Google, Apple and Amazon. The House Judiciary Committee has opened a bipartisan probe of the tech giants' market dominance.