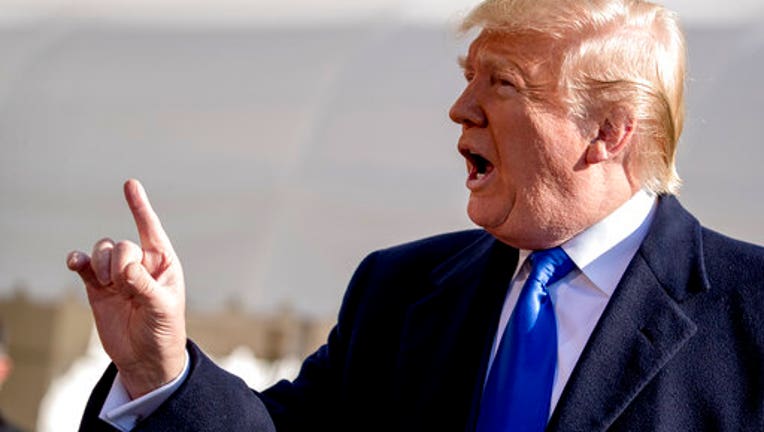 President Donald Trump tells a reporter to be quiet as he speaks on the South Lawn of the White House in Washington, Friday, Nov. 8, 2019, before boarding Marine One for a short trip to Andrews Air Force Base, Md. and then on to Georgia to meet with

WASHINGTON (AP) — President Donald Trump insisted Friday he has not been damaged by impeachment testimony detailing efforts by him and his administration to pressure Ukraine to publicly investigate his political rivals.

Speaking to reporters as he left on a campaign trip to Atlanta, Trump said he was "not concerned about anything" that has been disclosed so far.

"It seems that nobody has any firsthand knowledge," he said, adding that, "every one of those people canceled themselves out."

"Potus wanted nothing less than President Zelenskiy to go to the microphone and say investigations, Biden and Clinton," Kent testified. "Basically there needed to be three words in the message, and that was the shorthand."

Kent told investigators that that was his understanding of what Trump wanted Ukraine President Volodymyr Zelenskiy to say to unlock U.S. military aid, as relayed to the official by others, including those in direct contact with the president.

Numerous current and former Trump officials have testified that the president was conditioning U.S. aid on Ukraine publicly investigating Democrats including his potential 2020 political foe Joe Biden and Biden's son.

Clinton, he explained, was "shorthand" for the 2016 U.S. presidential campaign. It was a reference to Trump's view, pushed by his personal attorney Rudy Giuliani but outside of mainstream U.S. intelligence, that Ukraine played a role interfering in the election.

Kent also raised concerns about Giuliani's "campaign of lies" against Ukraine Ambassador Marie Yovanovitch and the Trump administration's firing of the veteran diplomat.

House investigators are releasing key transcripts from days of closed-door interviews in the impeachment inquiry as they prepare for public sessions with witnesses next week. A whistleblower's complaint about Trump's telephone call with Zelenskiy was the spark that ignited the investigation.

Trump on Friday objected to the public sessions, even though he, the White House and Republican allies on the Hill had objected to interviews taking place behind closed-doors. And he claimed that Democrats were only interested in speaking with people who dislike him, even as the White House has blocked potentially more supportive witnesses, including acting Chief of Staff Mick Mulvaney, from appearing.

Democrats have now released a total of nine transcripts so far in their impeachment investigation and they still have a few more to go. The public hearings start next Wednesday. Reported by Joe Toohey

"This is just a continuation of the hoax. It's a disgraceful thing," said Trump, insisting — despite evidence to the contrary — that the inquiry is helping him politically.

Trump also tried to distance himself from his ambassador to the European Union, Gordon Sondland, telling reporters: "I hardly know the gentleman." He has previously praised Sondland.

Kent had testified for hours in October about the shifting U.S. policy toward Ukraine as administration officials and Giuliani were taking the lead, acting outside of regular foreign policy channels.

The career official began to understand that unless Ukraine took on the investigations Trump wanted, the administration would hold up nearly $400 million in military aid to the young democracy that relies on U.S. support to counter Russian aggression.

Kent said he memorialized in writing the conversations he was having with other diplomats amid his concerns of "an effort to initiate politically motivated prosecutions that were injurious to the rule of law, both in Ukraine and U.S." The memorandum was submitted to the State Department.

He told investigators he was uncomfortable with what he was hearing about Giuliani pushing the investigations and Trump's special envoy to Ukraine, Kurt Volker, engaging Ukrainian officials on the subject.

"And I told Bill Taylor, that's wrong, and we shouldn't be doing that as a matter of U.S. policy," Kent said, referring to William Taylor, the top diplomat in Ukraine who has also testified in the inquiry.

Sondland, had dubbed himself, Volker and Energy Secretary Rick Perry the "three amigos" with a mandate to take the lead on Ukraine policy over the career diplomats, Kent testified.

At one point, Kent said, Volker's assistant, Catherine Croft, asked if anyone had sought investigations from Ukraine. Kent said he hoped the U.S. had not, because "that goes against everything that we are trying to promote in post-Soviet states for the last 28 years, which is the promotion of the rule of law."

Within days, he was receiving a readout from Lt. Col. Alexander Vindman, an Army officer assigned to the National Security Council who was among the officials listening to the call. Vindman has become a key witness in the House investigation.

Vindman was "uncomfortable" as he gave Kent the readout and unwilling to share much of what was discussed, even over the secure phone line between the NSC and State.

"It was different than any readout call that I had received," Kent said. "He felt_I could hear it in his voice and his hesitancy that he felt uncomfortable."

Vindman told him the tone of the Trump-Zelenskiy call was "cooler, reserved" and that Zelenskiy, a former comedian, had tried to turn on the charm.

He said that Vindman told him that "the conversation went into the direction of some of the most extreme narratives that have been discussed publicly."

The diplomats and national security officials weren't the only ones concerned about the military aid being shut off to the East European ally.

"Many senators, particularly from the Republican side," called and talked to the president, he said. Senate Majority Leader Mitch McConnell and Sens. Jim Inhofe of Oklahoma and Rob Portman of Ohio and were among them.

Trump has insisted it was a "perfect" call with Zelenskiy, and he tweeted Thursday that Americans should just "Read the Transcript."

House Speaker Nancy Pelosi used that as an opportunity to tweet excerpts from the call, including the part where Trump asks Ukraine for "a favor."

Next week, Kent, Yovanovitch and Taylor are expected to appear in the public hearings.

First to testify, on Wednesday, will be Taylor, still the top diplomat in Ukraine, who relayed in his closed-door session his understanding that there was a blatant quid pro quo, with Trump holding up military aid to Ukraine, a U.S. ally facing threats from its giant neighbor Russia.