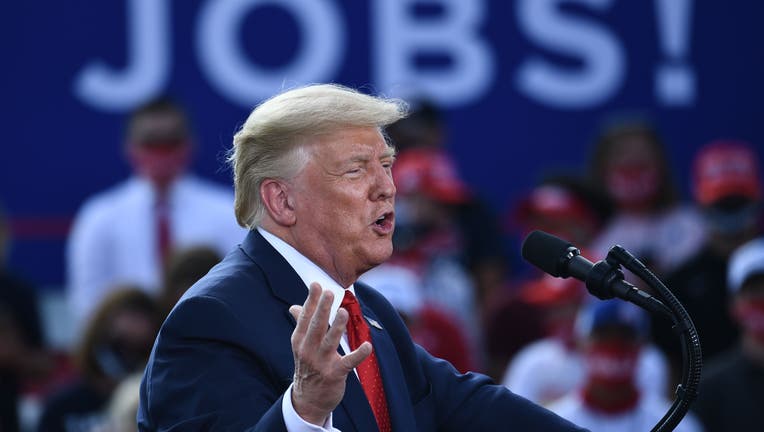 US President Donald Trump delivers remarks on the economy at an airport hanger on August 17, 2020 in Oshkosh, Wisconsin. (Photo by Brendan Smialowski / AFP) (Photo by BRENDAN SMIALOWSKI/AFP via Getty Images)

OSHKOSH, Wis. - President Donald Trump confirmed Monday that he plans to deliver his Republican convention acceptance speech from the White House next week.

Speaking from a campaign rally in Oshkosh, Wisconsin, Trump made the announcement as he was delivering remarks on the U.S. economy.

Criticizing the Democratic National Convention for airing a “taped speech” during the four day event, Trump said, “Who wants to listen to that?”

“They’re making speeches that are taped, who wants to listen to Michelle Obama do a tape speech?" Trump said.

“We’re doing a real speech on Thursday, next Thursday,” he said. “Doing it live from the White House. And we have plenty to say.”

Such a move would mark an unprecedented use of public property for partisan political purposes, and congressional leaders in both parties publicly doubted Trump could go ahead with the plan. Democratic House Speaker Nancy Pelosi said flatly that he “can’t do that.”

Last week, the president leaned into the idea during a television interview with FOX News Channel’s “Fox & Friends.”

“I think it’s a beautiful setting, and we are thinking about that,” he said.

Presidents who lost the popular vote

The Electoral College and popular vote have only misaligned five times throughout 200 years of presidential elections.

The Republican National Convention is scheduled for Aug. 24-27. Trump is to be formally nominated on Aug. 24 in Charlotte, North Carolina. But the venue for his speech accepting the nomination had previously been up in the air.

All four days of the convention, including the speech, were planned for Charlotte until Trump feuded with the state’s Democratic governor over coronavirus health restrictions. Trump then moved the speech and other elements of the convention to Jacksonville, Florida, a move welcomed by the state’s Republican governor. But the president later canceled those plans because of a resurgence of the coronavirus in Florida.

Trump said holding the speech at the White House would be the “easiest from the standpoint of security” and the least expensive option because he — and the many staffers, Secret Service agents and others who typically accompany him — wouldn’t have to travel.