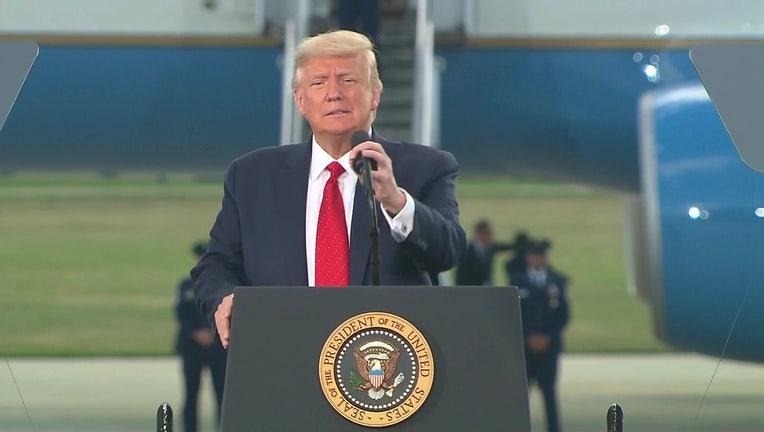 The Republican president made two swing-state campaign appearances on Monday, first in Minnesota and then in Wisconsin, which was to be the location for the Democrats' convention before the coronavirus outbreak.

Trump said he had “no choice” but to campaign during the convention in order to address voters in the face of what he described as hostile news media.

“The only way we’re going to lose this election is if the election is rigged," Trump said in Wisconsin, raising anew with no evidence the specter of significant voting fraud.

During the Wisconsin rally, the president told the crowd he would run for a third term if he is re-elected in November, because he claimed his campaign was spied on in 2016 -- even though the FBI found no evidence of illegal spying.

“We are going to win four more years, and then after that, we’ll go for another four years because you know what? They spied on my campaign," Trump said. "We should get a redo of four years.”

Presidents are barred from seeking a third term in office by the 22nd Amendment to the US Constitution, which says, “No person shall be elected to the office of the President more than twice.”

The 22nd Amendment was passed by Congress in 1947 and ratified by the states in 1951, following President Franklin Delano Roosevelt's 12-year tenure in office. He'd been elected to four terms, though he died soon after the last election. He was the only president to serve more than two terms in office.