NEW YORK - A sleeping teen narrowly missed being hit when an out-of-control pick-up truck smashed through their bedroom.

The truck went through a bedroom that a teen was inside in a converted garage.  The family says that if the bed had been in a different spot in the room the could have been a tragedy.

It happened on Cypress Lane by Carman Ave. at around 1 a.m.

"I was scared to go outside thought something fell from the sky," said Hung Trinh, a neighbor. "I went from the back door and saw a pickup truck hit the front and went out the side and went into the neighbor’s backyard."

The truck kept going into a neighbor's yard and almost hit that house, too.

The truck's driver initially fled the scene after the crash but was quickly apprehended by police.

The driver has been identified as Blas Flores-Velasquez of Brentwood.

Flores-Velasquez has prior arrest and was deported from the United States once before, and is currently in the U.S. illegally.

He is facing charges including DWI, leaving the scene of an accident, and operating a motor vehicle by an unlicensed driver.

FOX 5 News reporter Jodi Goldberg took a photo from inside the home after the hole was boarded over.  It showed how close the truck was to the bed. 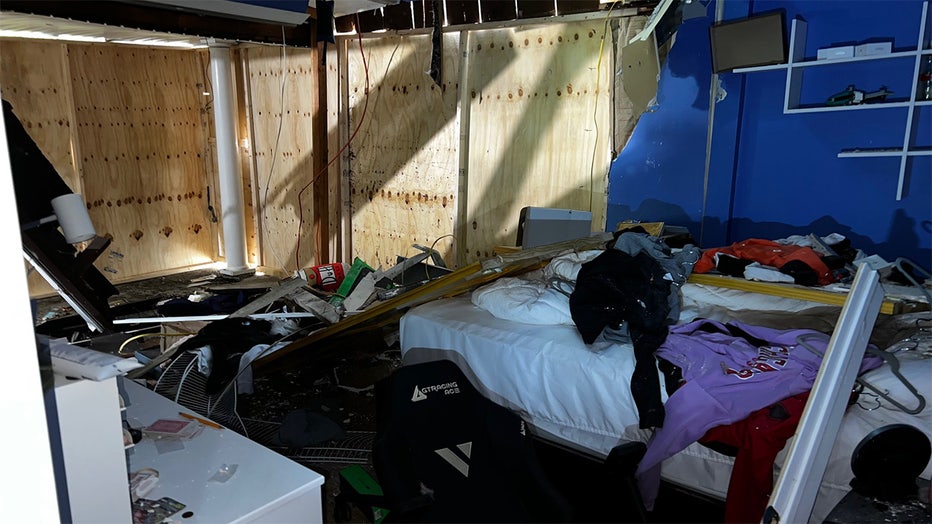 A photo shows the inside of the Long Island home that a truck crashed through. (Jodi Goldberg/FOX5NY)