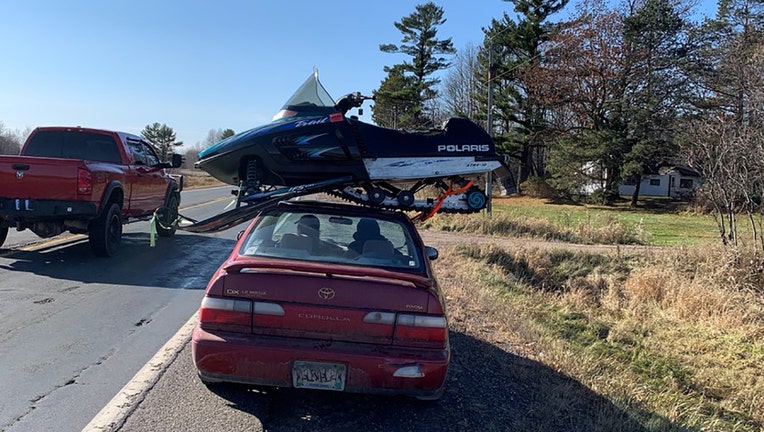 CLAYTON, Wis. - The Wisconsin State Patrol had a little advice for a guy who transported a snowmobile by strapping it to the roof of his Toyota Corolla: Bad idea.

A trooper pulled over the driver on Highway 63 in northwestern Wisconsin on Sunday afternoon after seeing the snowmobile perched sideways on top of the sedan.

The Wisconsin Department of Transportation tweeted a photo of the car with the Polaris topper on Monday with a message: “Folks, don't try this at home.”

The 23-year-old driver was issued a warning about the hauling technique and cited for failing to buckle up, according to DOT spokeswoman Christena O’Brien.

The driver, Matthew Schmit, of Clayton, told the trooper he had just bought the snowmobile and was driving it over to a friend’s house to show him, the Star Tribune reported.

“I know it looks sketchy, but we had it strapped down and shook it,” he said. “Up like in this kind of region, stuff like this gets seen all the time, but more like the back roads.”

Schmit told the trooper his vehicle had Minnesota license plates because he had purchased the car in the Twin Cities last spring and hadn't gotten around to transferring the title.