Astroworld victims: Who they were and the life they left behind

More information is coming out on the Astroworld festival disaster in Houston. We are now learning more about the victims and the timeline of events that happened during a crowd surge. Preliminary information from HFD Chief Sam Peña was that there were about 50,000 people in attendance, and at around 9:15 p.m., the crowd began to "compress" over the stage, causing panic and people started falling out. However, right now, it's unclear what caused the deaths of the eight people but once the medical examiner finishes their investigation.

HOUSTON - Travis Scott will cover funeral expenses for the victims of the 2021 Astroworld Festival tragedy, Fox News can confirm.

The rapper, whose real name is Jacques Bermon Webster, announced in a press release Monday that he is working with law enforcement and investigators to "respectfully and appropriately" contact the families of the victims so that he can do everything in his power to assist those affected "throughout their grieving and recovery process.

In addition to covering the funeral expenses, Scott noted that he has partnered with the therapy service BetterHelp, which will provide free one-on-one online therapy with a licensed therapist to those who want it. He is also working closely with NAMI, MHA National, and MHA of Greater Houston (Mental Health America) to direct all those in need to proper mental health services.

BetterHelp will direct those in immediate need to the appropriate local service including a hotline, various counseling services, psychoeducation, community-based healing circles, support groups, and other related services. 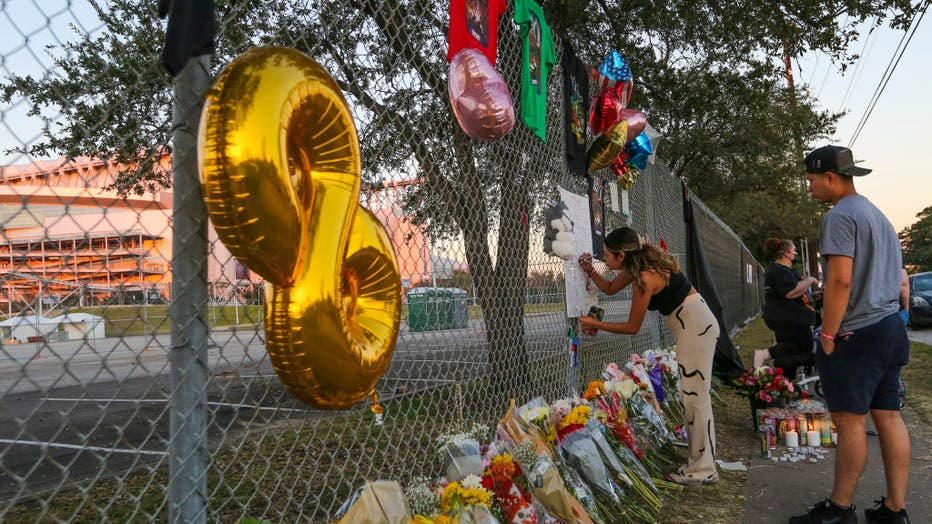 A woman writes on a remembrance board at a makeshift memorial on November 7, 2021 at the NRG Park grounds where eight people died in a crowd surge at the Astroworld Festival in Houston, Texas. Around 50,000 people were in the audience at Houston's NR

Scott was performing at the music festival he founded when the crowd reportedly surged resulting in eight deaths and several injuries. He has since faced criticism over the decision to keep the show going while first responders did their best to help the injured audience members. He was named in three separate lawsuits by victims and other Astroworld 2021 attendees.

According to a press release, Scott’s sole focus right now is figuring out ways in which he can help with relief. He previously took to his Instagram Story the night after the event to note that he would be dedicating his time to assisting the victims.

"I just want to send out prayers to the ones that was lost last night," Scott says in the first part of the video. "We’re actually working right now to identify the families so we can help assist them through this tough time."

Scott continued by noting that he wasn’t aware of the severity of the situation when he decided to continue with the concert. He also explained that he typically tries to ensure his fans are safe during his shows.

"My fans… My fans, like, really mean the world to me and I always just really want to leave them with a positive experience and any time I can make out anything that’s going on, I stop the show and help them get the help they need, you know? I could just never imagine the severity of the situation."