Jasper Wu was asleep in his car seat when he was fatally struck by a bullet during a shootout in Oakland. Police are searching for suspects who opened fire on Saturday along I-880. KTVU's Henry Lee reports.

OAKLAND, Calif. - The president of Oakland's Chamber of Commerce identified the 23-month-old boy killed over the weekend by a stray bullet traveling on the freeway as Jasper Wu of Fremont.

In one, he's wearing overalls and blowing a dandelion. In another, he's dressed as Superman, standing in front of a white Lexus in a driveway.

"The bullet went through the windshield," Chan. "The baby never get to cry. They will never see the baby smile again." 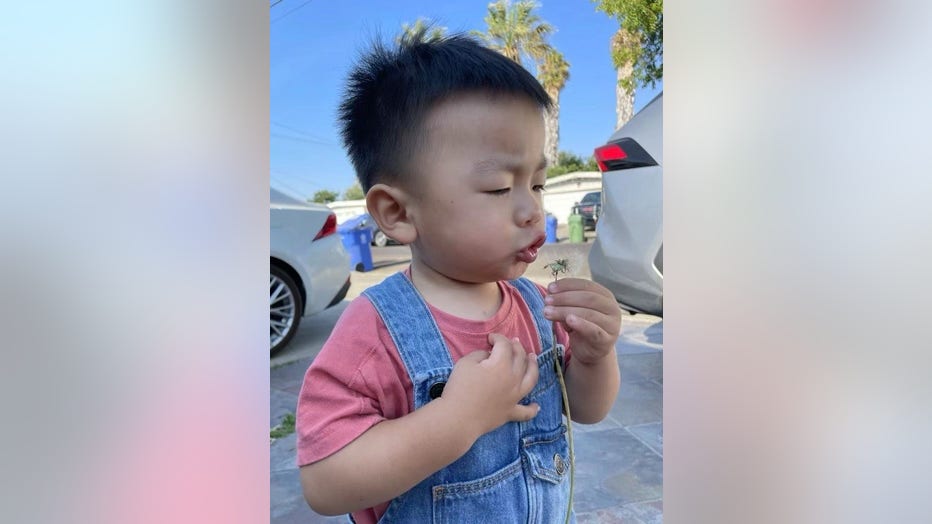 The California Highway Patrol said the toddler was in that Lexus headed south on I-880 when shots rang out in the northbound lanes of the freeway near Filbert Street in West Oakland about 2 p.m. Saturday. One of the bullets hit Jasper.

Jasper's mother, who was driving, was able to stop their vehicle around the Broadway exit. There were two other children in the car, who were not hurt. The family was on their way home to Fremont from San Francisco.

"They just couldn't believe how this happened," Chan said. "It could happen to any one of us. Driving on the freeway."

The CHP said it believes the boy and his family were not the targets.

The California Highway Patrol discussed the fatal shooting of a 23-month-old boy on i-880 in Oakland as well as the spate of shootings on freeways in Alameda County over the past 12 months.

"Evidence collected on the northbound side of the freeway may indicate the victims were not targeted and the child passenger was struck by a stray bullet," the CHP said in a statement.

The toddler was taken to UCSF Benioff  Children's Hospital in Oakland but died here, police said.

Chan has been helping the family. He said the mother is staying strong even though, "inside I know she's crying like crazy.

On Monday, Jasper's father was en route from China to bury a son he has never met in person.

Meanwhile, Chan said the community is "asking the CHP to step up patrol on the freeway."

Carl Chan has been helping the family of Jasper Wu, 2, who was killed by stray bullets in Oakland. He said the mother is staying strong even though, "inside I know she's crying like crazy." Allie Rasmus reports

Investigators still have not released a description of the vehicle the shots were fired from.

Fremont police sent condolences to Jasper's family, adding "this act of violence is not acceptable."

Chan said the family is getting help from Oakland Police Crime Victim Services. The Chinatown Chamber of Commerce is also going to raise money for the boy's family.

The Highway Patrol asks that anyone with information about the shooting call the CHP Investigation Tip line at 707.917.4491.

The president of Oakland's Chamber of Commerce ID'd the boy killed on the freeway as Jasper Wu, 23 months old.