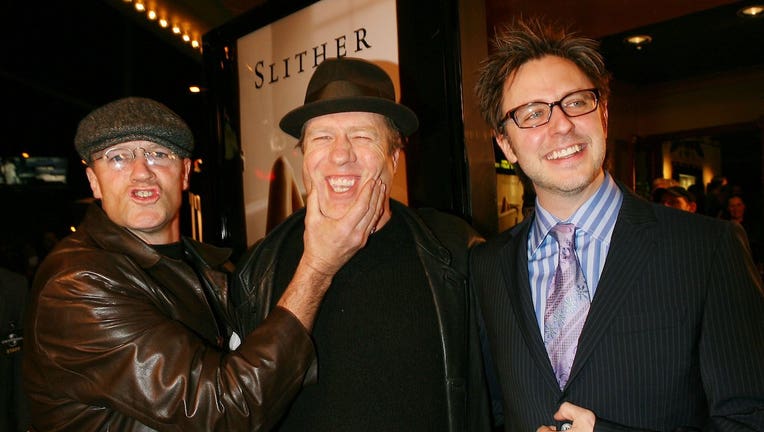 CHICAGO - When James Gunn catapulted the lovable screwups of "Guardians of the Galaxy" into the pop-cultural stratosphere, his star ascended alongside Star Lord’s — but the A-list director’s roots are firmly planted in the raucous, gleeful world of B-movies. On the eve of the release of Gunn’s excellent "The Suicide Squad," let’s look back at the director’s feature film debut: the 2006 horror comedy "Slither," a cult classic currently streaming for free on Tubi.

James Gunn’s "Slither": A gory glimpse of things to come

The premise: A meteorite crashes outside a small town in South Carolina, and it’s got a passenger. A parasite from space oozes out from its core and sets out in search of vessel, and it finds one in Grant Grant (Michael Rooker), the rich, possessive husband of Starla (Elizabeth Banks), a goodhearted local teacher.

While "Grant" still maintains some knowledge of his life and the world, he’s no longer in control of his mind and body, the latter of which begins to transform into something much more gooey and with several lethal tentacles. As Starla becomes suspicious, so does Chief of Police Bill Pardy (Nathan Fillion), who has long carried a torch for Starla.

But they’re soon outnumbered, as Grant’s new pilot seems to be what Starla calls a "conscious disease": a bloodthirsty sentient entity infecting or impregnating all unlucky enough to cross his path. It would seem that an alien plagues is bad, bad news, and no one — not pets, not kids, not Mayors, and not your heroes — is safe.

Banks gives Starla an air of guilelessness, making it easy to root for her, but she never allows Starla to become a passive damsel in distress. Her determination drives the pace of the film. Banks also ensures that the otherwise outlandish gross-out horror comedy has roots in emotionally rich soil. And she can scream with the best of them.

Rooker is no less impressive. You’d think it would be hard to see a performance through layers and layers of alien ooze, but he somehow pulls it off. But Rooker is also good in the film’s pre-infection scenes, giving Grant more complexity and color than your average boilerplate bad husband.

While Banks and Rooker both land some punchlines, the best come from Nathan Fillion, whose characteristic charm is dialed up to 11. This is a film in which nearly everyone acts as the straight-man to the malevolent body-piloting goopy alien entity, and Fillion has his deadpan down to a science.

While Banks doesn’t appear in "The Suicide Squad," you can expect to see both Fillion and Rooker. The latter also accompanied Gunn on his adventures with Marvel Studios. Beyond the leads, the cast includes Gregg Henry (another "Guardians of the Galaxy" alum), Tania Saulnier, and a slew of others.

See bits of "The Suicide Squad" in "Slither"

The gleeful gore of "The Suicide Squad" is present and accounted for in its predecessor, which put its budget of $15 million to good use in creating the deliciously repulsive creature that stalks through the film. This is the kind of movie likely to elicit involuntary vocal responses; this writer let loose with more than one "eughhhhh" in a recent viewing. The violence is both visceral and cartoonish, which hints at the undeniably stylish and often shocking combat sequences in Gunn’s latest, and as with "The Suicide Squad," "Slither" is perhaps not the best choice for viewing if you’ve got a meal in front of you.

The two films are often equally (and giddily) profane. The careful deployment of curse words is an art, and Gunn is a master, with Fillion there as his finest interpreter. Gunn uses the rated-R section of his vocabulary not to shock, but to enhance the humor, and Fillion’s knife-sharp timing adds to the effect. What does one do when a gloopy alien parasite has overtaken your own? You let loose with some blue language, that’s what.

Shock may not be the reason Gunn’s characters get colorful with their word choices, but it’s nevertheless one of the best tools in the writer-director’s toolbox. "Slither" is a visceral experience from the first, but as the creature grows, so does the film’s daring. It’s as if Gunn never stops one-upping himself, presenting his characters with one ghoulish sight after another and making sure the audience sees every bit of the carnage. It’s a tool used to great effect in "The Suicide Squad," in which our not-quite heroes are confronted by foes and feats that seem increasingly insurmountable.

If the above description hasn’t already made it clear, neither film is kid-friendly. That is, unless the kids are good with gore and you’re comfortable with your wee ones letting loose with the occasional F-bomb after viewing. Otherwise, parents should save both for future viewing.

Why you should watch "Slither"

Inevitably, "The Suicide Squad" will be compared to "Guardians of the Galaxy" — we made the comparison ourselves. But "Slither" makes "Guardians" look positively tame (and hygienic). For a better sense of Gunn’s facility for finding the comedy in the grotesque, pull up his 2006 cult classic. It’s much better preparation for what’s to come than anything Baby Groot has to offer.

About the writer: Allison Shoemaker is a Chicago-based pop-culture critic and journalist. She is the author of "How TV Can Make You Smarter," and a member of the Television Critics Association and the Chicago Film Critics Association. She is also a producer and co-host for the Podlander Presents network of podcasts. Find her on Twitter and Instagram at @allisonshoe.