Wednesday's episode saw a shocking twist departure and brought back nostalgic vibes of Halloween from the 70s and 80s, which was very fitting considering it was Fright Night.

LOS ANGELES - We’re going to need a priest and a proton pack after tonight’s double-reveal on "The Masked Singer."

Fans had to say goodbye to Scarecrow and Bugaboo, which was fitting considering the theme of Wednesday’s show was Fright Night.

Warning: This article contains spoilers for Season 8 of "The Masked Singer." 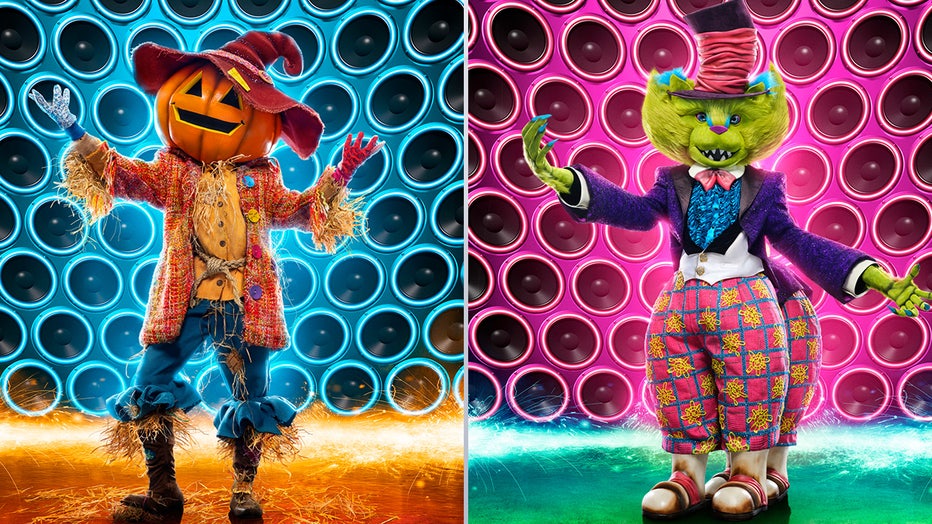 Scarecrow (L) and Bugaboo (R) from "The Masked Singer." (FOX)

In a first-ever "The Masked Singer" twist, Scarecrow willingly bowed out of the competition, but not before revealing the celebrity underneath.

Scarecrow turned out to be an icon of 70s horror films: Linda Blair. Blair is known for her role as Regan MacNeil in "The Exorcist" for which she won a Golden Globe and received an Oscar nod.

"I know it shocked everybody. They are great artists and I wanted them to go on and perform," Blair explained.

Blair reluctantly left the show due to her time being needed at her animal welfare foundation, Linda Blair Worldheart Foundation.

The organization provides a unique safe haven for animals and top-quality, lifelong care to the animals it rescues, according to the website.

The actress and activist used her time on the show to give her foundation a shoutout, which panelist Ken Jeong commended.

"Thank you for using your platform in the best way possible," Jeong said.

Under the mischievous smile of Bugaboo was none other than singer/songwriter Ray Parker Jr., who is also known for his iconic song, Ghostbusters.

"I don’t wanna go home! Bring some Bugaboo back," Parker Jr. said. "Someone fix it. Somebody do something."

The multi-Grammy award-winning artist said he wanted to be on the show because it looked like "a whole lot of fun."

"Singing the song live to the audience, I liked that part," he said. "I wanted to stay, I was having a good time."

How to watch "The Masked Singer"

Tubi and this television station are both owned by the FOX Corporation. This story was reported from Los Angeles.