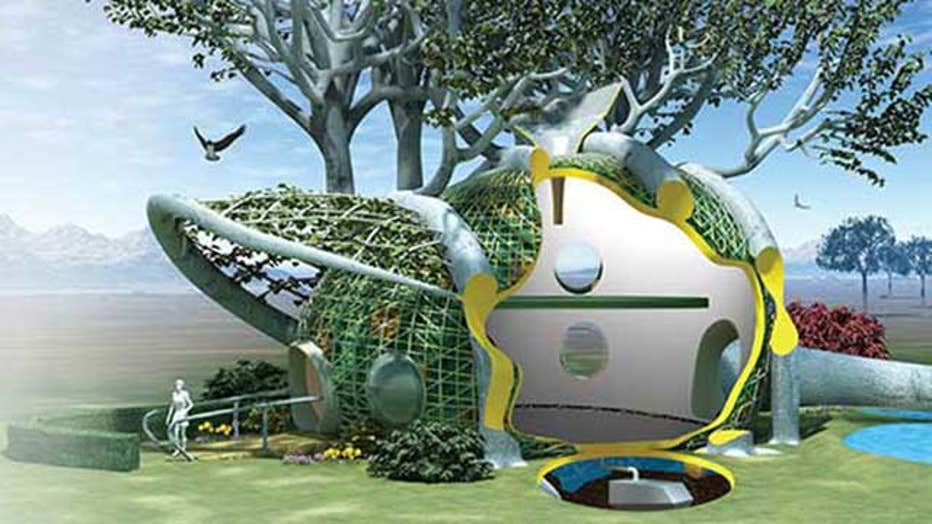 NEW YORK - On 300 acres between Williamsburg and DUMBO, the former Brooklyn Navy Yard had shipbuilders once construct war ships.

Now, the property is being used as a green manufacturing center, a new kind of factory for inventors cultivating the next "big thing."

Harvard graduate, MIT PhD, and now NYU professor Mitchell Joachim is working on environmentally friendly ways for us to live.

"I think we are in a bit of a crisis when it comes to the climate," Joachim says. "The way we make buildings today has to change.

One of his ideas is the living tree house.

"We don't chop the tree down. We move into the tree and we surround ourselves with woody plants and vines that help control the local geometry of a home," Joachim says.

Blending biology and architecture, scientists are genetically modifying wood to grow it in the shape of a house that allows people to live on the inside and animals to live on the outside.

"There is no distinction between your home and the landscape," Joachim says. "You can have entire villages grown in this process."

Another example of biology and architecture merging is a chair that made of mushrooms. You could even eat it.

"When you are done with our chair you throw it into a garden and feed thousands of other organisms and life forms and contribute to the Earth's ecosystem... that web of life as opposed to a chair from IKEA you chuck in a landfill and it's done," Joachim says.

The Brooklyn architects are often inspired by nature, including one who designs energy-efficient lights.

He says he's inspired by the beauty of nature.

"When I'm building things I have to obey the rules of electricity and the rules of structure," Krugman says. "When I find that I'm doing well and making things really efficiently, often times they end up looking like natural structures like jelly fish or tiny sea creatures."

These inventors have the support of city and state leaders. $46 million in tax dollars are invested in the manufacturing center.

The hope the next big idea grows here in Brooklyn.