SARASOTA, Fla. - The Ringling Bros. and Barnum & Bailey Circus is making a comeback, but this time without animals. The announcement comes four years after shutting down following declining ticket sales and backlash from animal rights groups.

For nearly 150 years, the Ringling Brothers and Barnum & Bailey made animals the star of the show. Now, people are taking center stage as part of the big top comeback.

"It's great that they are going to re-launch, but I don't understand why no dogs and cats," Big Cat Habitat Founder Kay Rosaire said.

It's still not exactly clear what the new show will look like, but animals will not be part of it.

"We are currently still in the planning phase for the relaunch of The Greatest Show On Earth, which will not include animals. An official announcement will be made in 2022," a spokesperson for Feld Entertainment said in a statement emailed to FOX 13. 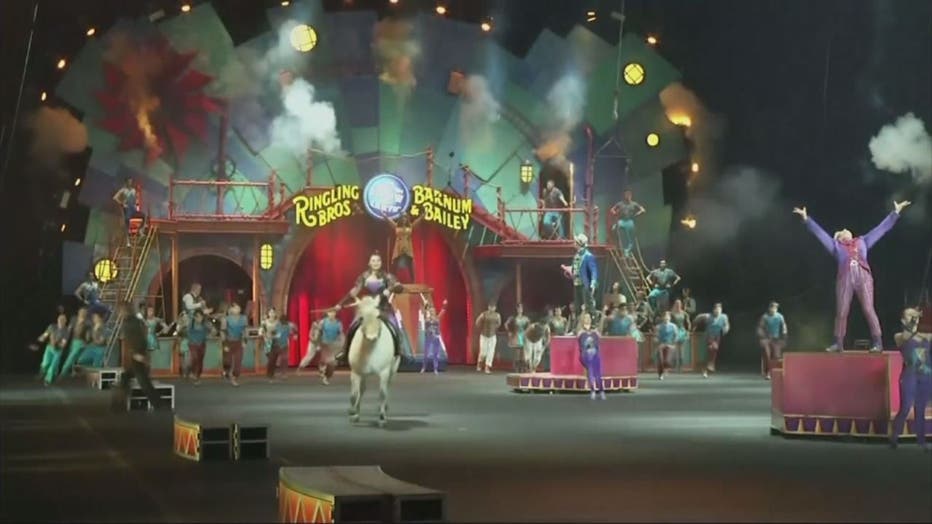 Rosaire is an 8th-generation animal trainer who runs Big Cat Habitat in Sarasota. She feels domesticated animals like cats, dogs, and horses should still be able to be part of the show.

"That's the best part of it for children and many adults love to see humans and animals working together. It's part of the tradition and there's nothing wrong with it. They still have dog shows and they still have racehorses," Rosaire said.

According to Feld Entertainment, the animal-free show will go live sometime in 2023. Rosaire isn't convinced the show will be quite the same.

"I don't see any problem with it if it's done with good care and ethics. Nothing wrong with animals being worked by humans. We've always had a right to live and work and play with animals and I think it should continue," Rosaire said.

From 2017: Circus community weighs in on the end of 'The Greatest Show on Earth'

Meanwhile, organizations like PETA say it's a step in the right direction.

"It's very exciting to hear the news that they plan to come back without animals and it's really in line with society's feeling now, progressing toward cruelty-free entertainment," PETA Foundation Associate Director of Captive Animal Law Enforcement Debbie Metzler said.

The circus, with its exotic animals, flashy costumes, and death-defying acrobats, had been a staple of entertainment in the United States since the mid-1800s. Phineas Taylor Barnum made a traveling spectacle of animals and human oddities popular, while the five Ringling brothers performed juggling acts and skits from their home base in Wisconsin. Eventually, they merged and the modern circus was born.

The sprawling troupes traveled around America by train, wowing audiences with the sheer scale of entertainment and variety of animals.

While the circus's decline happened due to a variety of factors – declining attendance, combined with high operating costs and changing public tastes – it was prolonged battles with animal rights groups that played a large role in its demise.

Ringling had been targeted for years by activists who said forcing animals to perform is cruel and unnecessary.

In May of 2016, after a long and costly legal battle, the company removed its iconic elephants from the shows and sent the animals to live on a conservation farm in Central Florida.

Inside look: Where Ringling's elephants retire

Attendance had been dropping for 10 years, said Juliette Feld, whose family bought the circus in 1967. But when the elephants left, there was a "dramatic drop" in ticket sales. Paradoxically, while many said they didn't want big animals to perform in circuses, many others refused to attend a circus without them.

The show ended for good in 2017, with the remaining animals sent to various homes and facilities.