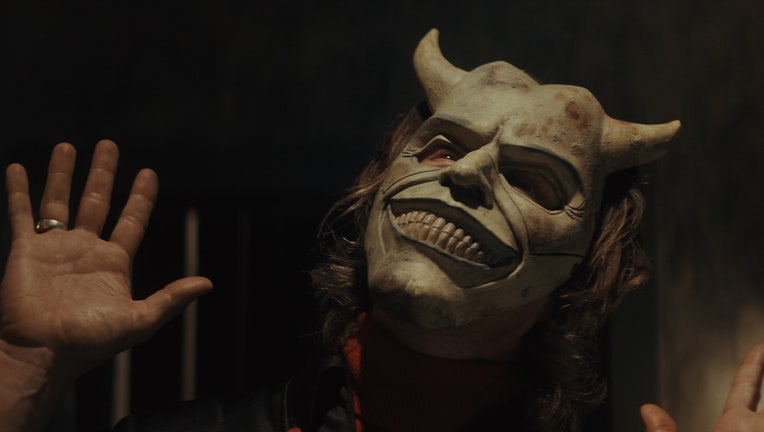 Ethan Hawke as The Grabber in The Black Phone, directed by Scott Derrickson.

CHICAGO - Scott Derrickson’s "The Black Phone" is a smart, feverish horror film that will particularly appeal to teenagers. It follows in the footsteps of "Stand By Me" and "It" (both the 1990 and 2017 versions) when Finney (Mason Thames), an adolescent baseball player living in North Denver in 1978, begins his summer playing ball games against kids like Bruce (Tristan Pravong), teenagers who by the fall will move from competitors to allies in a desperate fight for survival.

It’s a movie where teens find few saviors in the adults who surround them; they are left to settle their own scores and must find a morsel of courage in their unforgiving small town. You’re never quite sure why a scene is funny or terrifying, or if you’ve seen a story like this a million times before. And yet, "The Black Phone" harks to a vintage sensory memory, when your parents warned you what could happen if you wander too far away. It’s nothing new, but it still manages to terrorize you just the same.

This is a movie meant for kids to encounter, enjoy, and hail as a cult classic in 20 years.

About "The Black Phone": Beware the Black Van 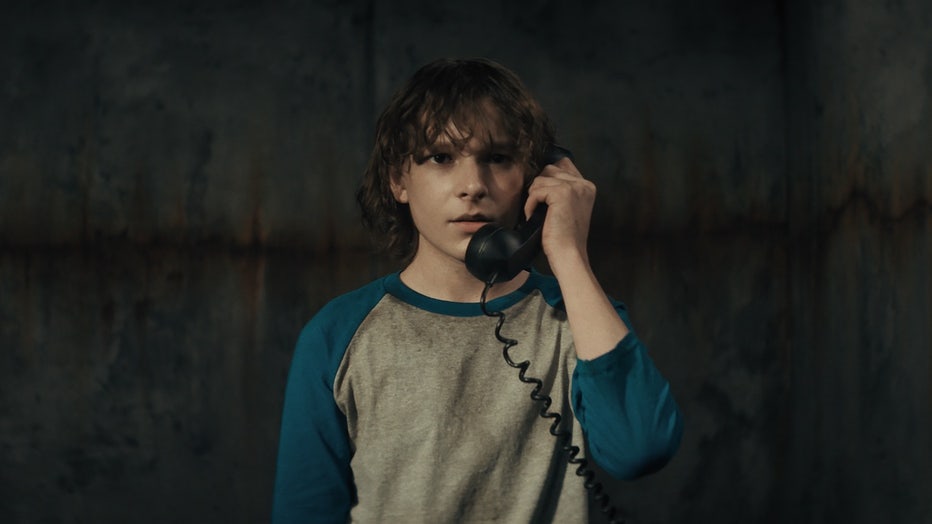 Mason Thames as Finney Shaw in The Black Phone, directed by Scott Derrickson.

Adapted by Derrickson and Robert Cargill from Joe Hill’s short story of the same name, "The Black Phone" doesn’t try to reinvent the horror wheel. Similar to Stephen King’s method of storytelling (Hill is King’s son, after all), the narrative roots itself in Finny’s troubled homelife. His father (Jeremy Davies), an out of control alcoholic still grieving his wife’s death by suicide, takes his rage out on Finney and his defiant sister Gwen (Madeleine McGraw). The latter often receives dreams, premonitions, if you will, which may, as Gwen believes, or may not come from Jesus. Their dad tries to ban her dreams by beating her viciously with a belt.

Lately, in her visions, however, Gwen can see a black van and black balloons. It’s a description that immediately raises suspicions among the local police. A rash of kidnappings of children remains unsolved with no bodies or any other trace of them turning up. The only clues at the police’s disposal involve black balloons found at the crime scenes.

For a time, the abductions barely faze Finney. He has his own demons at school in the form of bullies. A tough kid named Robin (Miguel Cazarez Mora) protects him when he can (an odd feature in "The Black Phone" is how every teen in this small town gets beaten to a bloody pulp). But soon Bruce goes missing. And then Robin does too. Until one day, while walking home from school, Finney comes across a man with a black van and black balloons who drugs him and locks him away in a soundproof basement. His only "comforts" are a dingy mattress, a toilet, some rolled up rugs and, you guessed it, a disconnected black phone attached to a cracked cement wall.

"The Black Phone" often swims gleefully through schlocky waters, particularly through the film’s actual villain: The Grabber (Ethan Hawke, reuniting with Derrickson for the first time since "Sinister"). He plays an emotionally stunted sadist who derives pleasure from putting the children he traps through a series of tests so he might physically abuse them when they inevitably fail. It’s not too much of a leap, or too distasteful to say Hawke goes full tilt playing this psychotic murderer. Donning a variety of literal masks, some partially revealing and others fully obscuring his face, the actor makes bold choices seemingly without rhyme or reason: Sometimes he plays The Grabber as flamboyant, at other points, as benevolent, vicious and comedic. It’s as though Derrickson pressed record and just let Hawke rip and roar. 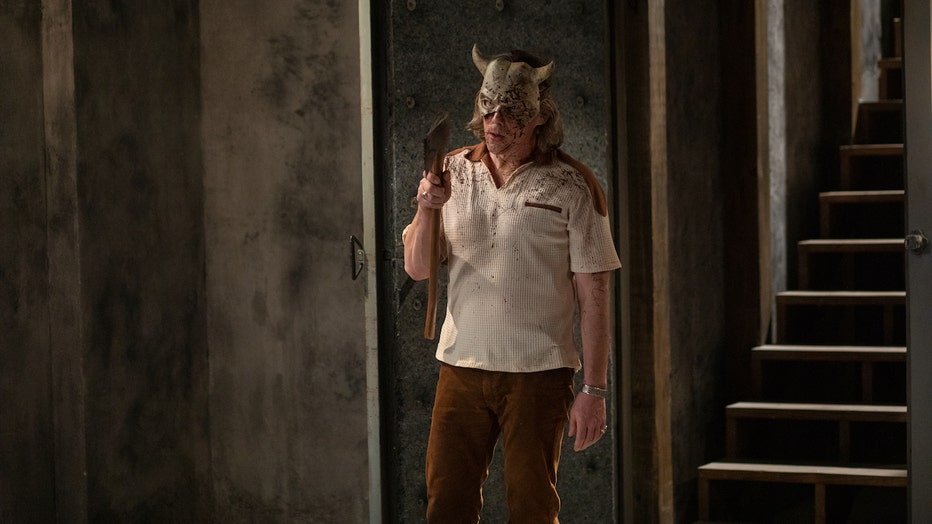 Ethan Hawke as The Grabber in The Black Phone, directed by Scott Derrickson.

It’s not a bad tactic. The resulting effect brings a bracing openness and nimbly walks the line between unsettling and fascinating; the abrupt tonal shifts function not as a bug but a charming feature in a movie unafraid to be silly and creepy at once.

Moments of seriousness inevitably arise given such difficult subject matter. Just as Finney loses hope, the disconnected black phone rings. The ghosts of the kidnapped kids are calling. One by one, each offers advice on how to escape from this cement prison. Some of the teenage actors give performances that veer into wooden territory, and the calls can trip into repetition.

The gore and jump scares also leave some frights to be desired. In this sense, you can see Derrickson understandably shying away from depicting anything too gruesome in a movie filled with kids (nothing here approaches "The House That Jack Built" levels of grisly). 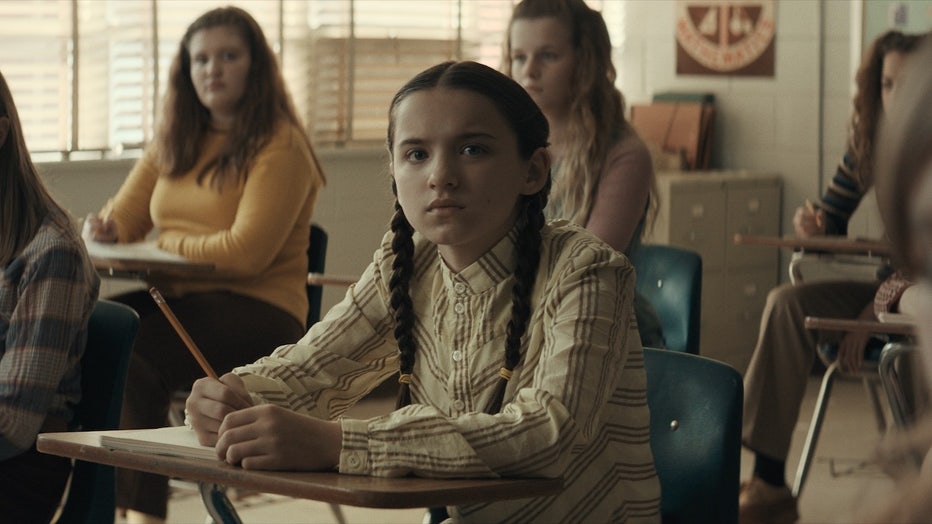 Madeleine McGraw as Gwen Shaw in The Black Phone, directed by Scott Derrickson.

Even so, this story is about teenagers learning to stand up for themselves in a destructive world which often renders them powerless. You can imagine most teens finding comfort in the resolve of these main characters. McGraw offers a winsome performance with some precocious ‘Drew Barrymore in "E.T."’ leanings. Thames also delivers a physically demanding turn while holding his own with Hawke.

By the end not every aspect lands: The abusive dad’s redemptive arc feels out of place; the religious elements barely simmer, undercooked and weirdly humorous. James Ransone, however, does deserve a shout-out as The Grabber’s comedic cokehead brother. And Derrickson and Cargill are never afraid to wear their influences on their sleeve, making allusions to "Texas Chainsaw Massacre," "It," "The Tingler" and so forth.

WATCH FREE ON TUBI: "The Tingler" — get the app

About the writer: Robert Daniels is a Chicago-based film critic with freelance bylines in the New York Times, in the Los Angeles Times, at RogerEbert.com, at Polygon, and at the Playlist. He has written widely about Black American pop culture and issues of representation.

Make it a double feature with "Devil’s Revenge," streaming free on Tubi

Okay, raise your hand if you don’t want to watch an archaeologist (William Shatner) who is "plagued by visions of a bird-like creature" discover a portal to actual Hell in a cave. Rated TV-14. 98 minutes. Dir: Jared Cohn. Also featuring Jeri Ryan, Jason Brooks.

How to watch "The Black Phone"

"The Black Phone" rings into theaters on June 24. It is not currently available to stream.