Consumers may have a higher bill when it comes to shopping for Thanksgiving groceries this year — and experts say ongoing supply chain bottlenecks are to blame, for the most part.

Prices on many household items have jumped in large part because container ships are stranded at ports and unloaded goods are waiting for trucks, leading to mass shortages and delays that have caused a longer-than-expected bout of inflation.

The rising costs are eating into worker pay, creating a drag on growth and driving Republican criticism of President Joe Biden just as his multitrillion-dollar tax, economic, climate and infrastructure agenda is going through the crucible of congressional negotiations.

Ports in Los Angeles and Long Beach, California account for 40% of all shipping containers entering the United States. As of Oct. 12, there were 64 ships berthed at the two ports and 80 waiting to dock and unload, according to the Marine Exchange of Southern California.

Commitments by the Los Angeles port’s operator, longshoremen and several of the country’s largest retail and shipping companies are expected to help relieve the backlog. 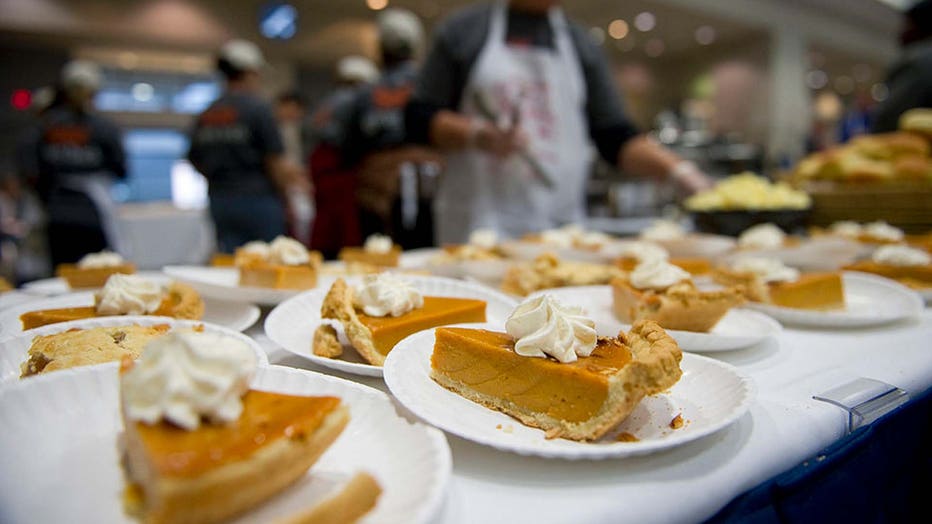 Walmart, FedEx, UPS, Target, Samsung and The Home Depot committed to unloading during off-peak hours, making it easier for the Los Angeles port to operate nonstop. The Long Beach port has been operating 24 hours daily for seven days for roughly the past three weeks in an attempt to catch up.

"As the holiday season approaches and widespread supply chain challenges continue to impact industries across the economy, IRI is tracking a basket of items for their availability, demand, price and promotion for Halloween, Thanksgiving and Christmas," said Dr. Krishnakumar ("KK") S. Davey, president of IRI Client Engagement, said in an IRI news release.

"Halloween season is shaping up nicely with the category growing in double digits, and we are recording significant out-of-stock rates on several Thanksgiving-related grocery categories at this time," Davey continued.

Inflation at the wholesale level rose 8.6% in September compared to a year ago, the largest advance since the 12-month change was first calculated in 2010.

The Labor Department reported in early October that the monthly increase in its producer price index, which measures inflationary pressures before they reach consumers, was 0.5% for September compared to a 0.7% gain in August.

IRI analyzes data and consumer shopping trends by combining data with predictive analytics to uncover new consumer insights and integrate them on the most technologically-advanced, cloud-based visualization platform, according to the IRI website.

IRI predicted that food items such as whipped toppings, liquid gravy, frozen pie/pastry shells, refrigerated pies and bakery pies could be in short supply this year.

Thanksgiving staples such as canned cranberry sauce or pumpkin pie filling might also be hard to come by because aluminum costs are up almost 90%, Katie Denis at the Consumer Brands Association told Marketplace.

"What that means is your canned cranberry sauce that makes that great sound when it slides out is going to cost a little bit more," Denis said.

But there is some good news — there likely won’t be a turkey shortage this year. Turkey sizes may be bigger and therefore a bird could be more expensive, but most people should be able to get their hands on one this Thanksgiving.

While the production of fresh turkeys is expected to be down 1.4% compared with November 2020, a spokesperson from the Department of Agriculture (USDA) told Consumer Reports "that calling this a turkey shortage is an overstatement."

"Shoppers might have a harder time finding a fresh turkey smaller than 16 pounds because demand is up due to smaller holiday gatherings, but frozen turkeys in all sizes will be in abundance," according to Consumer Reports.