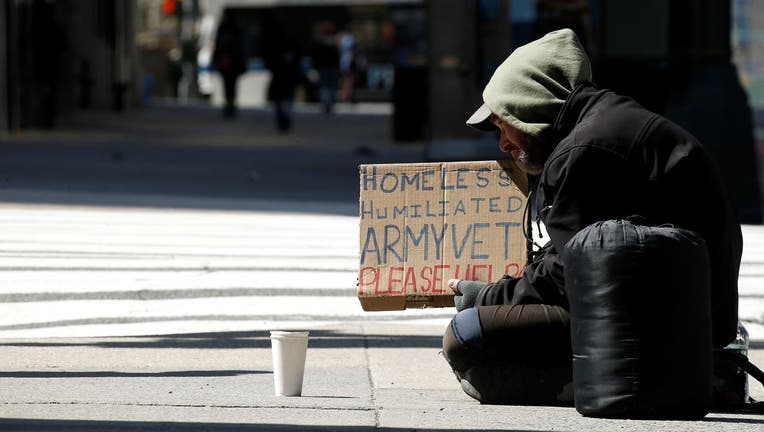 A homeless man begs for money on 42ne Street amid the coronavirus pandemic on April 11, 2020. (Photo by John Lamparski/Getty Images)

TEXAS - A few months ago, an act of generosity put Kenneth Smith on a path to a new life.

At the time, Smith was homeless and sitting in a chair outside an Outback Steakhouse in Fort Worth, Texas, WFAA reported.

A customer who was leaving the restaurant asked him if he was all right, to which he responded "No, I’m not OK at this time," Smith told WFAA.

The woman decided to give him a $100 gift card so he could buy dinner. While he was eating, Smith met the restaurant’s managing partner, Laura Hodges.

According to WFAA, that’s when Hodges told Smith she wanted to make sure he didn’t go hungry.

She told him: "I want you to always have somewhere that you can get a warm meal. So, here's my business card. Bring it anytime."

On and off for the next several months, Smith would stop by for food, according to WFAA. Last month, he asked for a job and started bussing tables.

Even with his new job, Smith still needed a place to stay, so Hodges asked for recommendations for an affordable motel on the Fort Worth Foodies Facebook group, WFAA reported.

The group went above and beyond motel recommendations.

According to the station, the group raised $2,200 for Smith, booked him a six-week stay at a nearby hotel and gave Smith clothing, kitchen items, groceries and even a bicycle.

"I think it’s so much of a good blessing," Smith told WFAA.

"I had absolutely no idea that people were going to latch onto that," Hodges added. "All they wanted to do was throw assistance out there and resources in any way that they possibly could."

According to WFAA, Smith is currently saving for a car and then a home.

"This is a whole new beginning that God has blessed me with, so I’m trying to get on this right, good track that He wants me to stay on," Smith told the station.

Meanwhile, Hodges said she wishes they could find the woman who gave Smith that $100 gift card.

"She blessed both of our lives," Hodges said. "This has been a great thing for both of us."

"I'm blown away by the generosity of people," she added. "It's absolutely amazing."