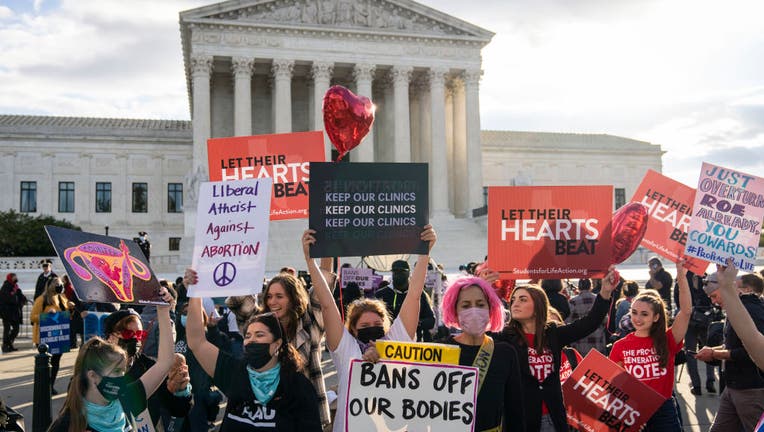 WASHINGTON, DC - NOVEMBER 01: Pro-choice and anti-abortion demonstrators rally outside the U.S. Supreme Court on November 01, 2021 in Washington, DC. On Monday, the Supreme Court is hearing arguments in a challenge to the controversial Texas abortion

WASHINGTON - The Supreme Court could rule as soon as Monday on Texas’ ban on abortion after roughly six weeks.

The justices are planning to issue at least one opinion Monday, the first of its new term, the court said on its website Friday.

There’s no guarantee the two cases over the Texas law, with its unique enforcement design that has so far evaded judicial review, will be resolved Monday. Those cases were argued Nov. 1, and the court also is working on decisions in the nine cases the justices heard in October.

But the court put the Texas cases on a rarely used fast track, raising expectations that decisions would come sooner than the months the justices usually spend writing and revising their opinions. The law has been in effect since Sept. 1.

With Thanksgiving approaching, Monday also is probably the last day the court could decide the Texas cases before the justices hear arguments Dec. 1 over whether to reverse nearly 50 years of precedents and hold that the Constitution does not guarantee the right to an abortion. The case is about Mississippi’s ban on abortion after 15 weeks.

RELATED: Supreme Court agrees to hear Mississippi's abortion ban in case that could lead to rollback of rights

It's been two months since the strictest abortion law in the country was allowed to take effect in Texas and already it's faced non-stop legal challenges. This video is from a previous story.

The Texas law bans abortion once cardiac activity is detected in the fetus, often around six weeks, before some women know they’re pregnant, and it makes no exceptions for rape or incest. Six weeks is long before the court’s previous major abortion rulings allow states to prohibit abortion.

The focus at the Supreme Court, though, is over the design of the Texas law, which deputizes private citizens to enforce it by filing lawsuits against clinics, doctors and others who facilitate abortions. The court is trying to sort out who can sue to challenge the law and whether a federal court can effectively block the law from being enforced.

Even though the justices have returned to the courtroom for arguments following a 19-month hiatus because of the coronavirus pandemic, decisions will continue to be posted on the court’s website rather than summarized aloud in the courtroom.

The longstanding tradition of recapping opinions from the bench has produced some notable moments of drama over the years, especially from justices who are reading from their impassioned dissents in major cases.

The building remains closed to the public, with only a handful of outsiders — lawyers who are arguing their case and reporters who regularly cover the court — allowed in the courtroom.