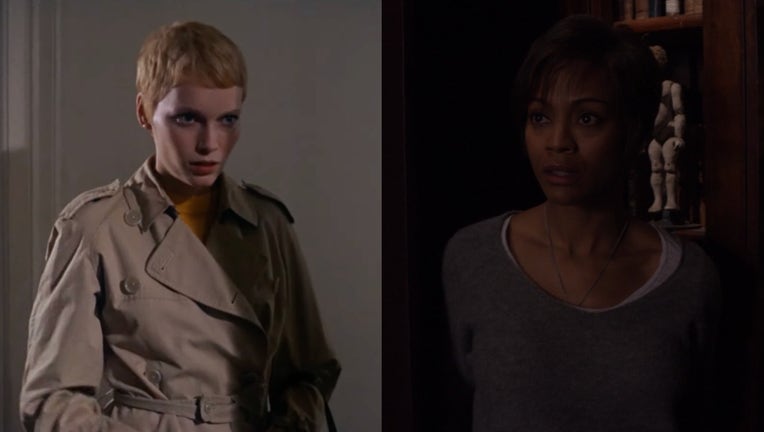 This month we’re spotlighting some of the best horror films Tubi has to offer in celebration of Terror on Tubi, a collection of 5,000 hours of spooky season programming. Today’s scare: "Rosemary’s Baby."

Haunted houses are a horror staple. Beyond an ordinary front door, any number of terrifying things can go bump in the night, ready to scare the tenants and audience alike. While isolated rural settings featured in "The Amityville Horror" and "The Conjuring" are rich in shock value, a densely-populated city can be equally frightful. Finding prime real estate in New York City or Paris? A nightmare. So when a dream apartment becomes available, sometimes compromises are made — compromises that Rosemary Woodhouse will soon come to regret.

Rosemary is the protagonist in Ira Levin’s best-selling novel "Rosemary’s Baby," a role famously played by Mia Farrow in 1968 and Zoe Saldana in the 2014 limited series event on NBC. Location is everything in each adaptation of this story, which sees a young couple move into a building rumored to have a dark past and a connection to the occult.

Plot details from both adaptations of "Rosemary’s Baby" follow. If you want to watch first, feel free; we’ll be waiting with the elevator ready. The miniseries is currently streaming for free on Tubi.

While the initial circumstances behind this decision differ in each adaptation, the result is similarly chilling. Among the couple’s new neighbors are an overly friendly older couple, the Castevets. Rosemary’s husband Guy (John Cassavetes in the 1968 film; Patrick J. Adams in the miniseries) quickly pivots from outward disdain toward the nosy Castevets to an intense friendship.

Meanwhile, Rosemary’s joy at finding out she is pregnant is short-lived due to the constant pain she experiences from the baby (she is also the one person who somehow loses weight when eating for two). Special smoothies made from herbs are pushed on the expectant mother by the Castevets and the doctor they set her up with, and she begins to question their motives.

Anyone not in agreement with this alternative medicine treatment plan is susceptible to suffering a deadly "accident." As the story progresses, Rosemary finds herself living an increasingly isolated existence in a city of millions.

A haunting lullaby composed by Krzysztof Komeda and with "la la la" lyrics sung by Farrow accompanies the opening shots of Roman Polanski’s "Rosemary’s Baby."* As the camera pans across the famous Manhattan skyline, it is an older architectural highlight that grabs our attention.

Situated on West 72nd Street and Central Park West, the Dakota apartments stand in as the exterior for the notorious (and fictitious) Bramford in this adaptation of Levin’s psychological horror novel. The New York City landmark was constructed in the 1880s and its imposing aesthetic — complete with looming Gothic turrets — makes it an ideal double for a building that Rosemary is told housed Victorian twins who ate human flesh as well as a renowned Satanist.

In real life, the Dakota is the infamous site of John Lennon’s assassination and has been plagued with curse claims and supernatural sightings. Newlyweds Guy and Rosemary Woodhouse are warned the Bramford has a "rather unsavory reputation," but are quickly won over by its charm, square footage and desirable location. The high incident rate of "unpleasant happenings" cannot detract from its positive attributes — even if the paper-thin walls don’t exactly scream privacy. The luxurious apartment was once even larger and the renovations to subdivide the space only add to the quirks (and concealed rooms).

It’s the kind of place you might sell your soul to acquire.

RELATED: Terror on Tubi: ‘I Spit on Your Grave’ and its Final Girl legacy

Tragic circumstances lead to their first in-person encounter with their neighbors, but by the time they meet Roman (Sidney Blackmer) and Minnie Castevet (Ruth Gordon), it feels like they know them intimately, thanks to the acoustics. For a movie set (and filmed) in New York City, the majority of time is spent within the newly decorated walls of Rosemary’s apartment, but this meeting occurs on the sidewalk. Their shared, grisly experience makes it hard to turn down a subsequent invite for dinner, and the Castevets quickly become a regular fixture in Guy and Rosemary’s lives.

Knowing a bustling city lies beyond the enclosed Bramford courtyard adds to Rosemary’s increasing isolation, making the experience still claustrophobic. Guy’s now-flourishing acting career coincides with Rosemary’s pregnancy; the more time he spends at work, the more she spends either alone or reliant on their too-attentive neighbors. Caught between surreal nightmares and disturbing reality, Rosemary begins to question whether an insidious plot is afoot.

When she does make it outside into the stifling Manhattan summer heat, she doesn’t even notice the yellow taxi cabs that come perilously close as she crosses the street. It is New York’s absence in Rosemary’s now small world that elevates the horror in Polanski’s atmospheric masterpiece when she momentarily escapes what was once her dream home.

*Considering the themes of this film are rooted in bodily autonomy, sexual trauma and gaslighting, it is impossible not to feel some sort of bitter irony regarding Polanski fleeing the US in 1978 while awaiting final sentencing after accepting a plea deal in a statutory rape case and the subsequent sexual assault allegations that followed.

New York City is where Rosemary and Guy Woodhouse hail from in the 2014 version, reimagined by director Agnieszka Holland. While the two-part NBC miniseries also stays relatively faithful to Levinson’s novel, it does offer a different stylish city as the backdrop for the demonic events.

Three months after miscarrying, Rosemary and Guy move to Paris, the result of Guy landing a teaching job at the prestigious Sorbonne. Rosemary has put her dancing career on hold so Guy can pursue his writing dreams — teaching pays the bills — and the French capital offers a change of scenery while they grieve.

Rosemary is dizzied and disorientated by her new city (and its language she doesn’t speak) — and that’s before witchcraft and Satanic rituals enter her world. While Manhattan fades into the background of Polanski’s movie, Paris plays an active role in this new take on a horror classic.

Shot on location in one of Europe’s most romantic cities, familiar landmarks pepper the skyline. Rosemary’s tourist status is reflected in her wide-eyed reactions to her new home, whether she’s responding enthusiastically to gourmet cooking classes or simply soaking up the sights. (Think "Emily in Paris" but with fewer selfies and bucket hats and a lot more of the devil.)

The story’s religious elements are emphasized through dialogue and shots of Notre Dame looming in the background. The miniseries is a veritable bingo card of Parisian staples such as the Eiffel Tower, literary cafes frozen in time, the Seine, and even the Statue of Liberty — the one gifted by the US in 1889.

Perhaps the best use of a spooky location comes in the second episode when Rosemary ventures 20 meters below ground to the eerie Catacombs that are home to the bones of more than six million Parisians. "Some of the best addresses in Paris are said to be built over the souls of the damned," the tour guide explains, which Rosemary thinks is a giant red flag. The guide reassures her this is simply "silly ghost stories," but her current abode in the Eighth Arrondissement would suggest otherwise.

La Chimere shares the same troubling history as the Bramford building in New York, complete with cannibal twins and an infamous Satanist. But the French capital is older than its cinematic counterpart, and its creepy stories are literally baked into the foundations.

Paris is a city full of ghosts. The "Rosemary’s Baby" miniseries dials up these elements, isolating Rosemary not only in her home but the entire city. It is a far less ambiguous (and bloodier) reading than the dizzying atmosphere of Mia Farrow’s spiral; however, the relocation adds a different and effective haunting quality.

Both New York City and Paris are associated with glamour and fantasy, but in "Rosemary’s Baby," chic wallpaper cannot paper over the devilish cracks.

About the writer: Emma Fraser is a freelance culture writer with a focus on TV, movies, and costume design. You can find her talking about all of these things on Twitter.

Candyman (1992): August saw the arrival of Nia DaCosta’s "Candyman," a "spiritual sequel" to the 1992 original from director Bernard Rose. Seeing this film isn’t a prerequisite for enjoying its descendant, but the ties between DaCosta’s film and Rose’s are robust. "Candyman" hit number one at the box office (racking up $22.3 million in North America in its first weekend in theaters), but it will cost exactly zero dollars to see its predecessor, and your experience with both films will be greatly enriched. Rated R. 99 minutes. Dir: Bernard Rose. Featuring: Virginia Madsen, Xander Berkeley, Tony Todd, Kasi Lemmons, Vanessa Williams, Ted Raimi.

The Guest (2014): A creepy Dan Stevens stars in this bloody 2014 thriller, in which a family welcomes "an army vet claiming to have served with their dead son" into their home, only to find they’ve opened the door for an absolute bloodbath. Rated R. 100 minutes. Sheila Kelley, Maika Monroe, Leland Orser, Lance Reddick, Ethan Embry.