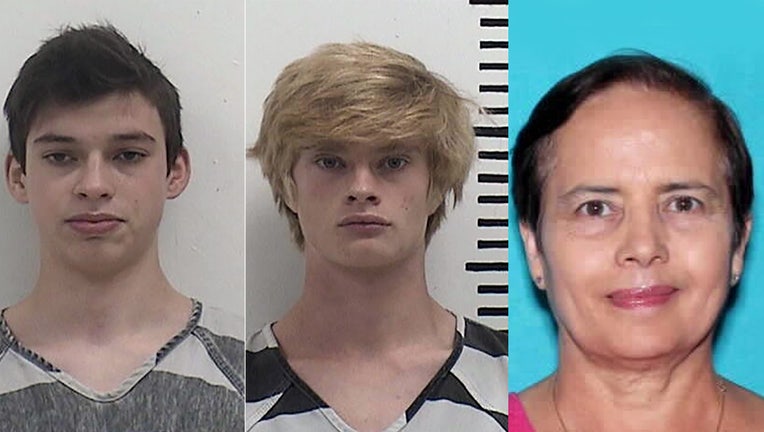 The Iowa teacher whose body was found underneath a tarp at a local park after police say she was murdered by two students gave an interview to a paper just a day before she died and talked about mortality.

Nohema Graber, 66, who was considered a leader in the Fairfield, Iowa, community, visited the town’s library to admire a display commemorating the Day of the Dead, which is celebrated by people of Mexican heritage.

"We all know we are going to die," she told the paper, according to KCCI. "It’s our way of laughing at death."

Graber taught at Fairfield High School, which is in the southeastern part of the state. Preliminary evidence indicates that she suffered from "trauma to the head," according to court filings. Her body was located at Chautauqua Park.

Willard Noble Chaiden Miller and Jeremy Everett Goodale, both 16, were charged as adults in the killing.

Police received a tip that Goodale posted details about planning the killing and a possible motive on social media, according to court documents. Authorities have not yet released the motive. The court documents indicated police investigators found clothing that appeared to contain blood at the homes of the teens.

Graber was born in Xalapa, Mexico, the capital of the state of Veracruz, about 180 miles (289 kilometers) east of Mexico City. She moved to Fairfield, the hometown of her husband Paul Graber, in the 1990s. They divorced five years ago but remained close, he told The Des Moines Register.

Her son, Christian Graber, posted a Facebook message Thursday saying he forgives the people who killed his mother and that there is no point in being angry.

"My mother was an angel of a woman and was one of the kindest souls," he wrote, ending his message with "Te amo madre — I love you mom."

"We had the wonderful fortune of growing up in a home filled with such an abundance of warmth and love," she said.

Gov. Kim Reynolds ordered all flags in the state to fly at half-staff Tuesday to honor the teacher.

"My heart goes out to the family, friends, colleagues, and students that are dealing with this tragic murder of Nohema Graber," Reynolds said, according to KYouTV.com. "Ms. Graber touched countless children’s lives through her work as an educator across our state by sharing her passion of foreign language."

Assistant Jefferson County Attorney Patrick J. McAvan said Friday that many people are asking if this is a racially motivated crime. "We do not have any evidence at this point that suggests that," he said.

A judge set a preliminary hearing date for Nov. 12. If prosecutors first file and a judge approves trial information — documents that contain the formal statement of charges that will lay out the evidence prosecutors have gathered to prove guilt — before Nov. 12, the preliminary hearings will not be held and the case will move forward with an arraignment on the charges.

Both teens are being held in jail on $1 million bond.